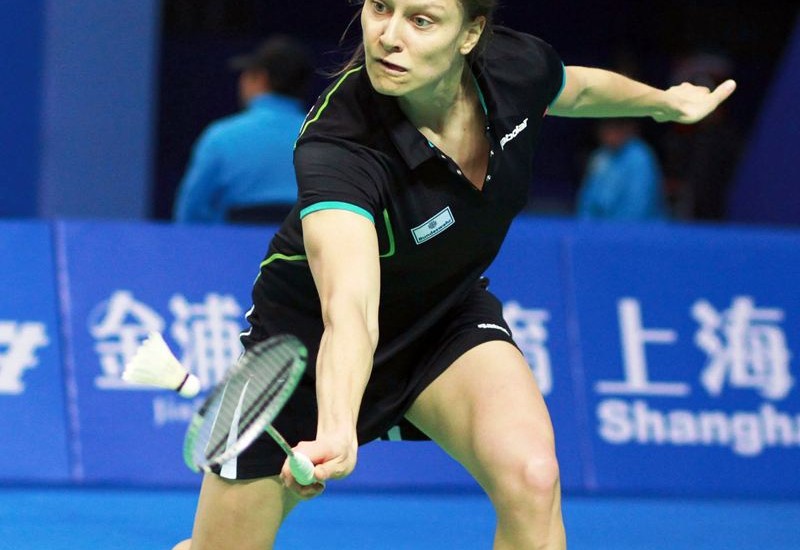 After a disappointing performance at the London Olympics, the German has won one tournament (Bitburger Open), reached a final (Denmark Open), and made the semi-finals of a third (French Open) over the last month. She had lost her last five encounters against world No. 1 Wang Yihan, but turned it around with a fighting display, to win 19-21 21-16 21-17. She will take on Thailand’s Ratchanok Intanon in the semi-finals. The other half of the draw will see Japan’s Minatsu Mitani square off against second seed Li Xuerui of China.

Mitani, the recent French Open champion, won a marathon match against qualifier Deng Xuan of China, 19-21 22-20 22-20. The match stretched to an hour and 16 minutes, and saw Mitani save three match points in the deciding game. It was a remarkable escape as Mitani found herself 17-20 down, but kept her focus to take the next five points in a row and clinch a spot in the semi-finals. Deng, who had won two qualifying rounds and upset higher-ranked players like Yao Jie and fourth seed Wang Shixian, had her chances in the second game, as she closed a 18-20 deficit to make it 20-all, but Mitani managed to squeeze past her to take the match to the decider.

Li Xuerui, meanwhile, was surprised in the first game by compatriot Han Li, but she imposed herself to close out the match 19-21 21-5 21-7.

The big surprise in Men’s Doubles was the loss of Olympic gold medallists and local favourites Cai Yun/Fu Haifeng. The Olympic champions came up against the new combination of Lee Yong Dae/Ko Sung Hyun (right), and went down rather tamely, 21-17 21-16. The performance of the new combination will enthuse Koreans, following the retirement of Lee Yong Dae’s long-time partner Chung Jae Sung after the Olympics. The new partnership is already proving successful as the pair won the French Open last month, in just their second tournament together.

There were no surprises in Men’s Singles, with three Chinese making the semi-finals. The top two, Chen Long (1) and Chen Jin (2) were joined by younger compatriot Wang Zhengming (left), who beat his quarter-final opponent Parupalli Kashyap of India with surprising ease. Kashyap stayed close with Wang until 11-all, but the Chinese shot ahead from there, and the Indian was outmatched in the second, 21-17 21-7. In Mixed Doubles, the Ma Jin/Xu Chen express motored on towards a third consecutive Superseries title, brushing aside fellow Chinese, Bao Yixin/Liu Cheng 21-15 21-19, to advance to the semi-finals.