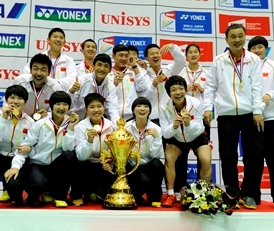 The tie for top honours in the Yonex BWF World Junior Championships 2012 (Mixed Teams) went down to the wire, with China coming from behind twice in a see-saw battle featuring some of the sport’s brightest young prospects.

Mixed Doubles pair Wang Yilu and Chen Qingchen were the heroes for China, clinching the decisive rubber from Akira Koga and Akane Yamaguchi, 15-21 21-19 22-24, in dramatic style at Chiba Port Arena.

This broke the tense 2-2 deadlock that resulted from Japan (team pictured right) snatching the Men’s Doubles and Men’s Singles while China – who were behind 0-1 and then 1-2 – stayed in the hunt by grabbing the Women’s Singles and Women’s Doubles fixtures.

It was then down to the Mixed Doubles to determine if the coveted trophy would remain in Japan or whether it would be travelling west to mainland China. The Japanese pounced first with the opening game going to Koga/Yamaguchi but, a determined effort by the opposition, saw China take the second. Thus, a third game would be necessary – and what gripping, tight high drama it was with both pairs displaying steely resolve. Ultimately, the Chinese prevailed 24-22 to spark celebrations among their contingent and fans.

What a superb showdown and advertisement for junior badminton!

Earlier, Japan won the Men’s Doubles – with Takuto Inoue/Yuki Kaneko conquering Zhang Ningyi/Liu Yuchen 21-17 17-21 23-21 – before losing Women’s Singles; Nozomi Okuhara going down 17-21 14-21 to Sun Yu. Kento Momota swung the tie back in the hosts’ favour by overcoming Xue Song 19-21 21-19 21-19 in Men’s Singles. It was then crunch time for China and, like the perennial champions they have been, they responded to the challenge. Their Women’s Doubles duo, Huang Yaqiong and Yu Xiaohan, trounced Ayako Sakuramoto and Chisato Hoshi of Japan, 21-6 21-7, to level the tie and leave the outcome on the rackets of their Mixed Doubles teammates. Defending champions, Malaysia, lost the Group Y play-off against Indonesia 1-3 and were left to fight for fifth to eighth place with Chinese Taipei, Hong Kong and Thailand. They held on to sixth place, after beating Hong Kong (3-1) before capitulating to Chinese Taipei (0-3) in the fifth-sixth play-off. Thailand ousted Hong Kong 3-2 to finish seventh.