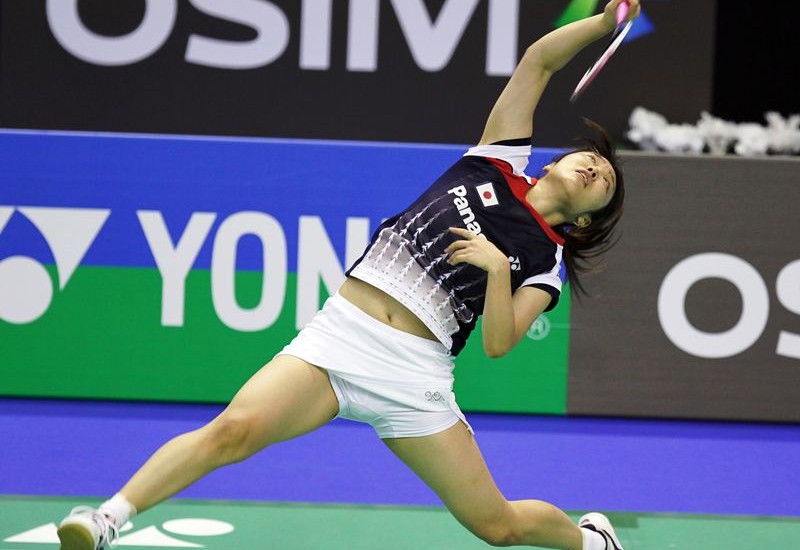 World No. 5 Wang Shixian’s run of poor form in recent times continued today as she was bounced out of the Yonex French Open by Japan’s Eriko Hirose in Women’s Singles.

China’s Wang, who was a consistent finalist and semi-finalist in 2010 and 2011, has been troubled by opponents ranked below her this year. This time it was the turn of Japan’s world No. 16 Hirose to beat her in a close contest, 13-21 21-18 22-20. To Wang’s credit, she never gave up fighting, even though in the deciding Saina Nehwal took just 38 minutes to get past Sapsiree Taerattanachai of Thailand. The 21-16 21-13 result underlined her sterling form. The Indian will play Intanon for a place in the semi-finals.

As in the Women’s Singles, the Men’s Singles too has only one Chinese quarter-finalist. Eighth seed Wang Zhengming had no problems in countering Hsu Jen Hao of Chinese Taipei (21-11 21-9). He faces Denmark’s Viktor Axelsen in a battle of former World Junior champions.

Denmark had a satisfying day, with Axelsen’s teammates Jan O Jorgensen (6) and Peter Gade (3) also progressing to the quarter-finals. Gade was troubled by India’s Ajay Jayaram in the first game, but the experienced Dane pulled it back in the second and third to win 18-21 21-17 21-14. By contrast, sixth seed Jorgensen cruised past Thai veteran Boonsak Ponsana 21-10 21-15. Only one of the two will make it to the semis, however, as they clash in the quarter-finals. Unlike the singles, China ensured a strong presence in the doubles. Only one of their ten doubles combinations was beaten. The quarter-finals will thus have four Chinese pairs in the Mixed Doubles, three in the Women’s Doubles, and two in the Men’s Doubles. The lone losers were Tao Jiaming/Tang Jinhua in the Mixed; ousted in a close match by Shin Baek Choel/Eom Hye Won of Korea.

Considering the Olympic gold (Zhang Nan/Zhao Yunlei) and silver (Xu Chen/Ma Jin; at left) medallists are on either half of the draw and , other pairs will find it difficult to wrest the Mixed Doubles title from China.