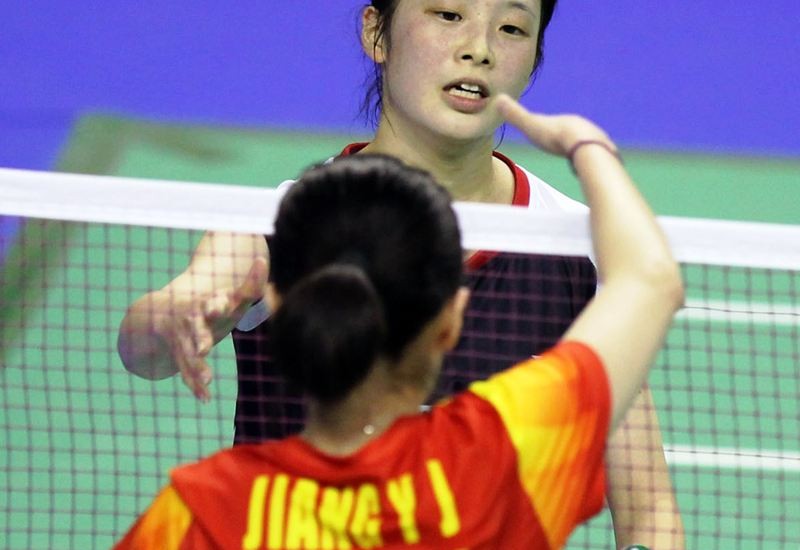 Japan’s Minatsu Mitani caused the biggest upset of the first round at the Yonex French Open today when she beat sixth seed Jiang Yanjiao of China in the Women’s Singles.

There were two other surprise results: China’s Du Pengyu, who had reached the Men’s Singles final at the Denmark Open on Sunday, was upstaged by Hong Kong’s Wing Ki Wong 23-21 16-21 21-10, while top seeds and Olympic silver medallists in the Men’s Doubles, Mathias Boe and Carsten Mogensen (Denmark), offered little resistance in a straight-games defeat to Mohammad Ahsan and Hendra Setiawan of Indonesia 21-16 21-15.

However it was Mitani, ranked No. 28, who stole the show in her opening-round match. The Japanese youngster shot ahead from 10-all in the first game to take it 21-14. Scores were closer in the second, with Jiang holding the advantage at 17-14, but Mitani made it 19-all and managed to serve out the match 21-14 21-19.

In other Women’s Singles action, top seed Saina Nehwal of India overcame a feisty challenge from China’s Han Li, 21-11 16-21 21-19. The third game was a close affair, and even though the experienced Nehwal built up leads of 13-8 and 19-17, her Chinese opponent kept catching up. Nehwal eventually proved the steadier player under pressure, seizing the last two points to advance to the second round where she takes on the 20-year-old from Thailand, Sapsiree Taerattanachai.

In Men’s Singles, Denmark had a good day, with veteran Peter Gade and his younger compatriots Jan O Jorgensen, Hans Christian Vittinghus and Viktor Axelsen recording victories. Gade’s conqueror in Denmark, Sourabh Varma, was again beaten by Indonesia’s Sony Dwi Kuncoro 22-20 21-16, but Varma’s teammate Ajay Jayaram made it to the second round after a 21-16 21-17 win over Thailand’s Suppanyu Avihingsanon, who had featured in a marathon match on Tuesday.

The only Chinese left in the Men’s Singles is eighth seed Wang Zhengming, who was a 21-13 21-17 victor over Marc Zwiebler of Germany.