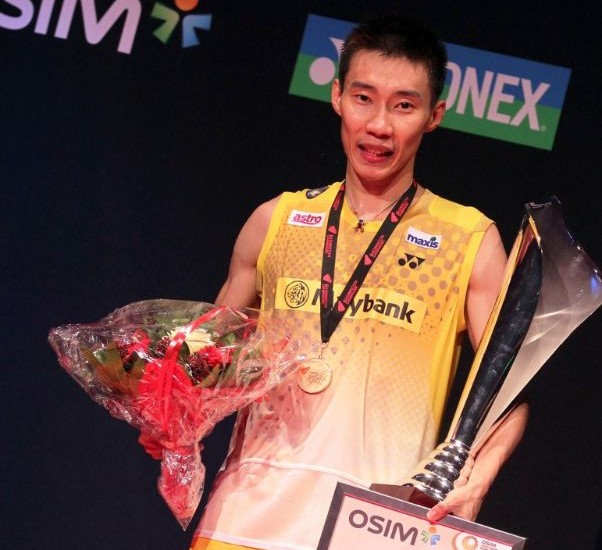 World No. 1 Lee Chong Wei celebrated his 30th birthday in victorious style by gifting himself with the Yonex Denmark Open 2012 championship today. Lee was given a hard fight by Du Pengyu. The Chinese world No. 9 fought every inch of the way, and kept the pressure on the world No. 1 from the first point. Lee found himself a game adrift, but he regained control of the second in characteristic style – smashing from the deep and quickly moving up to cut off returns. The game was won with relative

ease, and Lee must have expected Pengyu to fold quickly in the third.

The Chinese, however, refused to get deflated and kept attacking at a high pace. The relentless smashes and brilliant defence of the world No. 9 began to break Lee Chong Wei’s composure, and the scores were tight until 19. The Malaysian nosed ahead with a well-crafted point and let out a sigh of relief after nailing the final point.

“It was a tough match, and I feel very tired,” said Lee. “Today’s my birthday, so I’m happy I won. I did not rest after the Olympics, but I managed to find the strength within me to win the title.”

In contrast to the Men’s Singles, Saina Nehwal powered past sixth seed Juliane Schenk in the Women’s Singles final in straight games. Schenk, who had upset Olympic champion Li Xuerui and world No. 9 Jiang Yanjiao in earlier rounds, stayed close to Nehwal in the first game, but her challenge wilted as the match progressed, with Nehwal dominating her on all counts. Schenk had controlled the net in her previous two matches, but Nehwal did not allow the German that advantage.

“There were a lot of felicitations after the Olympics, and it was good that I attended them, as I arrived fresh for this event,” said Nehwal. “I was relaxed because I had achieved my dream of winning an Olympic medal. My right knee wasn’t in perfect condition. I must thank the fans for giving me the energy to win. The scoreline doesn’t say how tough it was. It was like a fairytale… this means a lot to me.” “Our senior doubles player (Chung Jae Sung) retired after the Olympics, and the team is trying to build new partnerships,” said Shin Baek Choel. “We were testing this combination for this tournament, so we’re happy to have won.”

In the Mixed Doubles, Ma Jin and Xu Chen proved to have higher reserves in their fuel tank than Indonesians Lilyana Natsir and Tontowi Ahmad in a 23-21 24-26 21-11 triumph. The first two games were hotly contested, but the Indonesians’ level dipped early in the third game and they never recovered.