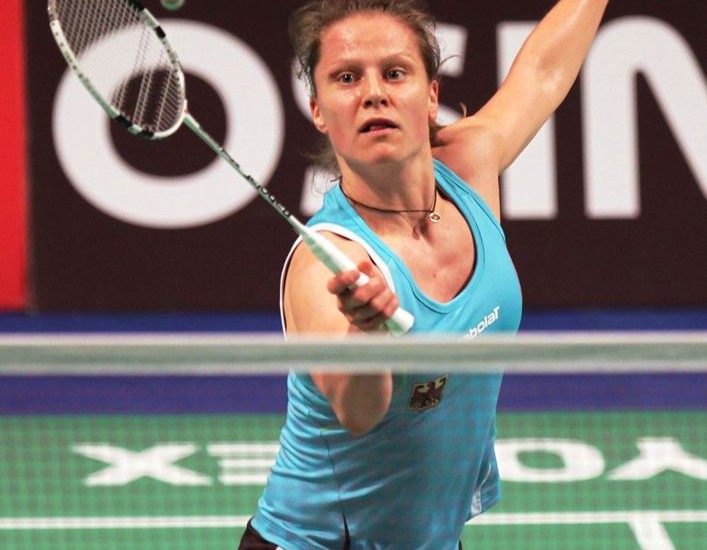 Germany’s Juliane Schenk finally reversed her losing streak against world No. 2 Li Xuerui with a combative performance at the Yonex Denmark Open today.

Her defeat of Li, who is the reigning Asian and Olympic champion, came as a huge relief to the German, who had plunged into self-doubt after a poor performance at the Olympics.

“It was a perfect match for me,” said Schenk. “After the Olympics, I went back home and thought about my future. If I had played here the way I played in the Olympics, I wouldn’t have got even five points. Today, I just tried 100 percent and I had full faith in my skills.” Schenk was a bundle of energy, moving well, hitting hard and accurately, and catching Li off-balance on a few occasions with some unexpected shots. She was up 13-6 in the first game and, although Li caught up at 15, the German kept her focus to power ahead in the Women’s Singles clash. In the second game she was even more impressive, shooting ahead to 18-8 as Li slowly withered under the onslaught.

Schenk, the sixth seed, will take on Jiang Yanjiao (China, 8), while in the other half, world No. 1 Wang Yihan plays Saina Nehwal (India, 3; left).

Jiang brought Wang Shixian’s remarkable run to a halt. Wang, who saved four match points in her last two matches, kept pace with Jiang in the first game, but was no match for her left-handed opponent in the second.

Denmark’s Tine Baun would’ve hoped for a longer run at her last home Superseries event, but it was not to be. Saina Nehwal was nearly flawless in returning whatever Baun could offer. The Indian focused on forcing the tall Dane to constantly bend down and pick up her tight net shots, and alternated that with deep tosses and accurate smashes, which proved too much for the 33-year-old Dane.

“It was a tough decision to retire at the 2013 All England,” Baun said. “But I’m also looking forward to my studies and spending time with the family.”

Nehwal paid tribute to the former world No. 1. “I made it tough for her as she constantly had to bend to pick up the net shots,” Nehwal said. “She wasn’t moving well either. She’s a fantastic player, and we’ll miss her after her retirement.” In Men’s Singles, Lee Chong Wei (Malaysia, 1) and Chen Long (China, 2) remained on course for a second straight final at the Denmark Open. Lee Chong Wei dismantled his young compatriot Daren Liew 21-16 21-16, while Chen Long was authoritative in quelling the challenge of Sony Dwi Kuncoro (Indonesia) 21-8 21-15. One semi-final will be an all-Chinese affair, with Chen Long taking on Du Pengyu (right), and the other will feature Lee Chong Wei against home hope Jan O Jorgensen.

In doubles, most of the favoured teams progressed to the semi-finals. Local heroes Mathias Boe/Carsten Mogensen held off a fierce challenge from the young Korean pair of Kim Ki Jung/Kim Sa Rang 24-22 22-20, while Koo Kien Keat/Tan Boon Heong (Malaysia, 3; at left) clinically cut down the dangerous Thai combination of Bodin Issara/Maneepong Jongjit 21-16 21-17.