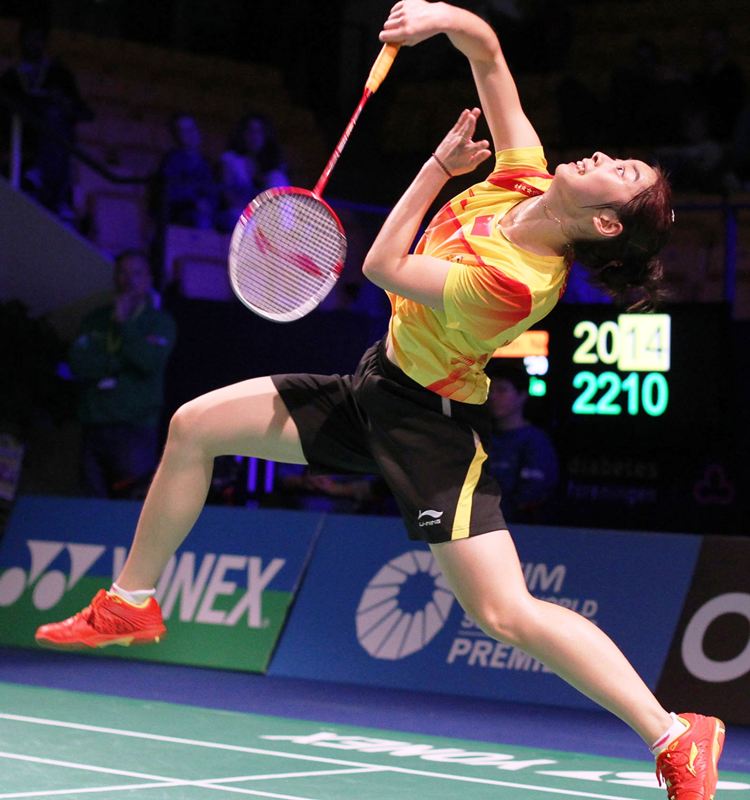 Wang Shixian staged her second, back-from-the-brink victory in a row today, saving two match points against Nichaon Jindapon to book a place in the quarter-finals of the Yonex Denmark Open 2012.

The world No. 5, who scripted a similar escape story in her first-round match against Bulgarian Linda Zetchiri, was down 18-20 in the third game against Jindapon, but yet Jindapon (left), ranked 57, is among a new crop of Thai youngsters in Women’s Singles who have logged impressive results this season. The 19-year-old, who has already beaten the likes of Eriko Hirose (No. 16) and Sayaka Sato (No. 15), overcame two qualifying-round matches and then upset Hong Kong’s Yip Pui Yin. Against Wang, she found herself 9-19 down in the first game, but hung in remarkably, winning 11 of the next 12 points to make it 20-all, before Wang squeezed out the game.

As the match progressed, the Thai youngster matched Wang stroke for stroke, staying in the long rallies with deep tosses, alternating with sharp slices and tight net shots, and returning anything Wang offered. The Chinese girl was even red-carded late in the third game for taking too long between points. At 20-18 Jindapon was one point away from the biggest win of her career but, to Wang’s credit, she produced immaculate shots when it mattered.

“It was a close match, we were at the same level,” Wang said. “I think my focus was better during the big points – and I got lucky.” Jan O Jorgensen (left), the last Dane left in the Men’s Singles, kept home hopes alive with a 21-18 17-21 21-11 win over Kenichi Tago (Japan, 8). However, Denmark suffered the reverse in Mixed Doubles when the popular team of Joachim Fischer and Christinna Pedersen went down to Indonesian pair Muhammad Rijal and Debby Susanto 21-19 21-18. Indonesia have seven representatives in various events tomorrow (Friday), including comeback man Sony Dwi Kuncoro, who was tested early on by India’s Sourabh Varma in their second-round clash.

Varma, who upset local favourite Peter Gade in the first round, gave Kuncoro plenty to think about, as he tenaciously fought every point and held the lead from time to time. However, two errors at 18-16 gave Kuncoro a window of opportunity, and the Indonesian powered ahead from there.