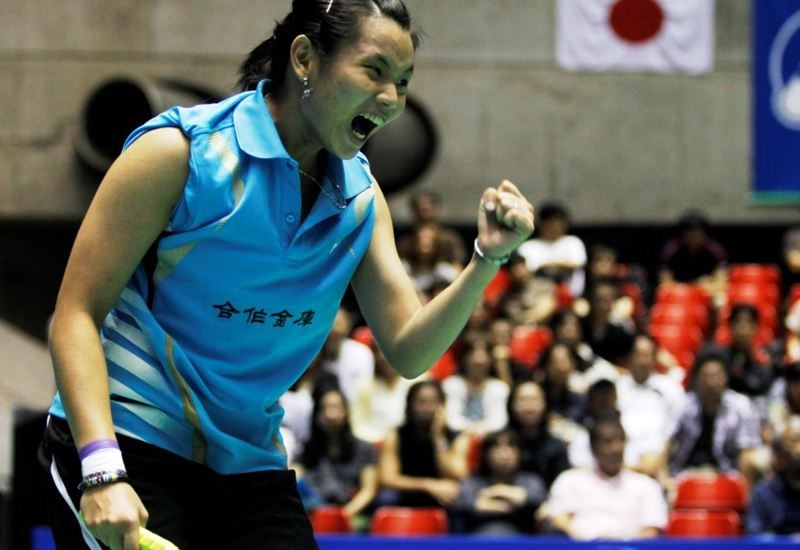 Tai Tzu Ying of Chinese Taipei came up with a delectable exhibition of deception and accuracy today to outclass Sung Ji Hyun and enter the Women’s Singles final of the Yonex Japan Open 2012.

The Taipei teenager showed glimpses of the class that has seen her emerge as one of the brightest prospects on the women’s tour. Her second Superseries final will be against Japanese veteran Eriko Hirose who overpowered Porntip Buranaprasertsuk of Thailand in the other semi-final.

In Men’s Singles, top seed Lee Chong Wei brooked no resistance from Simon Santoso (Indonesia; 3) as he breezed past him, 21-7 21-17. Lee’s opponent in the “It was really tough. I’m very tired,” said Ponsana (at right) to the press. Reflecting on the final against Chong Wei, he said: “He plays very fast and controls the game well. It will be very difficult. I lost to him many times, but I’ve defeated him twice. I will do my best.”

Tai Tzu Ying stole the show today, though. The Taipei girl unleashed a variety of strokes to keep Sung Ji Hyun constantly off-balance, while her smashes found the line on either flank with deadly accuracy. She won the second game rather easily, but found herself down 5-11 in the third.

Tai refused to surrender, reducing her errors and firing winners from improbable angles. A couple times she surprised Sung with her backhand serve flicked high, and her accuracy and power slowly wore down South Korean Sung, whose errors began to mount. Tzu Ying was a comfortable winner in the end, closing out the match 16-21 21-16 21-17.

Hirose’s encounter against Porntip Buranaprasertsuk was in contrast to the second semi-final. The Japanese girl was pushed in the first game, but her speed and power eventually broke apart Buranaprasertsuk’s challenge. Hirose used her sliced drop to devastating effect, with her opponent stranded mid-court on a few occasions, unable to read the shot. The Japanese surprisingly have never won a gold medal at their home Japan Open. They will have an opportunity to overturn this tomorrow – apart from Hirose, who is in the Women’s Singles final, the Women’s Doubles duo of Shizuka Matsuo and Mami Naito will also contest the final. They must get past Lok Yan Poon/Tse Ying Tsuet (Hong Kong; at left), who surprised the local hopefuls and No. 3 seeds Miyuki Maeda/ Satoko Suetsuna 16-21 21-8 21-18 to dash hopes of an all-Japanese showdown.