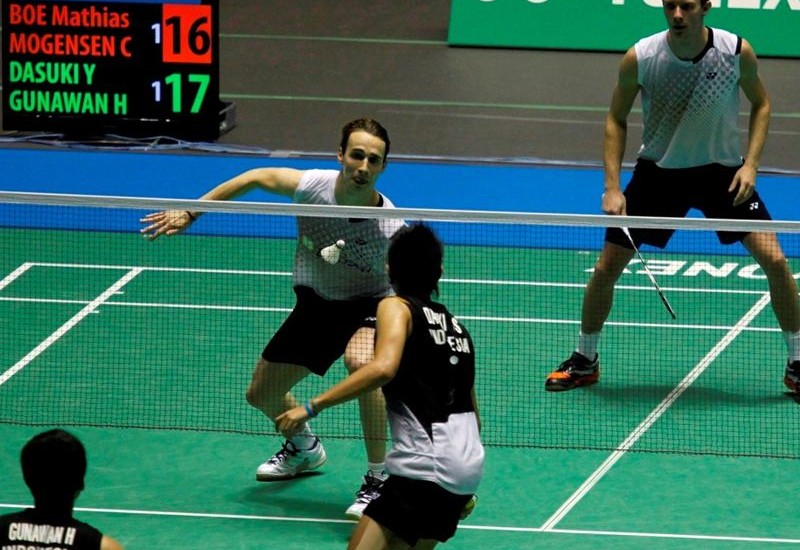 World No. 86 Sakai, who came through two rounds of qualifying, had beaten No. 6 seed Jan O. Jorgensen in the first round. He carried that good form into the second, earning a hard-fought win against Wong, 19-21 21-18 21-14. Sakai, who has two tournament victories this season, takes on veteran Boonsak Ponsana of Thailand in the Men’s Singles quarter-finals.

Though there were a few minor surprises in Singles, it was the Doubles that saw some notable exits. Two Olympic silver medallists – Mathias Boe/Carsten Mogensen (Men’s Doubles) and Reika Kakiiwa/Mizuki Fujii (Women’s Doubles) were bundled out. While Fujii and Kakiiwa were ambushed by their teammates Meanwhile, both the top seeds in Singles progressed without fuss. Tine Baun (at left) was imperious against Busanan Ongbumrungpan (Thailand), winning in 28 minutes, while Lee Chong Wei (below) won an unexpectedly easy encounter against lanky Dane Viktor Axelsen 21-10 21-12. Lee Chong Wei’s young compatriot Chong Wei Feng booked a quarter-final spot against him by Lee’s friend and rival Taufik Hidayat was likewise untroubled by Japanese qualifier, Akira Koga, and will take on compatriot Simon Santono in an all-Indonesian quarter-final.

Among the day’s gripping encounters was that between Indian teenager, PV Sindhu, and fourth seed Bae Yeon Ju of Korea. Sindhu has had a fabulous season, upsetting the likes of Sung Ji Hyun (world No. 8) and Li Xuerui (No. 2), and winning the Asian Junior title. She began well against Yeon Ju, winning the first eight points before the Korean got on the board. The Indian powered on from there and won the first game in quick time.

Yeon Ju fought back well and, from 10-all in the second game, managed to level the deficit. By the third game, the Indian’s shoulders had slumped and she made a number of unforced errors. Yeon Ju went up 16-7 but Sindhu refused to give in; reverting to her attacking game to win a series of points and make it 14-18. Yeon Ju however kept her nose in front and just edged past her opponent, 21-18, in the deciding game. Yeon Ju takes on Eriko Hirose of Japan next while Tine Baun faces Porntip Buranaprasertsuk of Thailand.