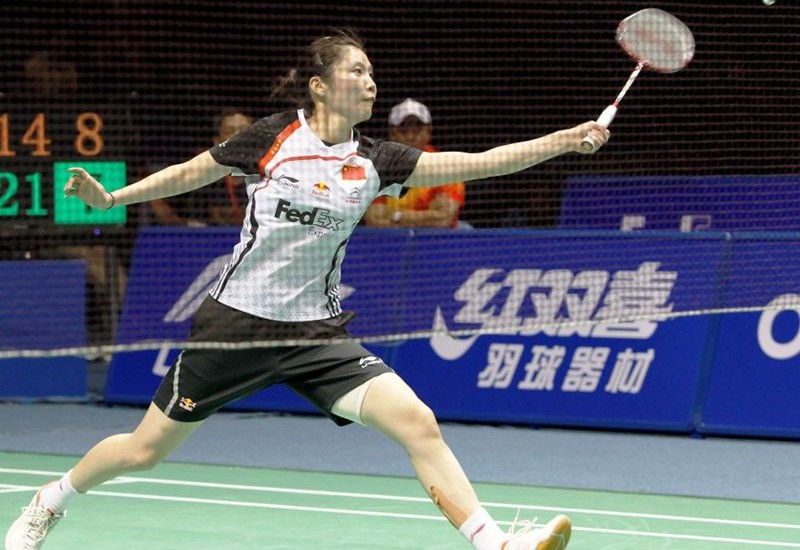 After sweeping all five Olympic gold medals in London, China has the chance to repeat that feat in the Li-Ning China Masters. The hosts assured themselves of at least three victories – in Women’s Singles, Women’s Doubles and Mixed Doubles – which will be all-China contests. It will be up to Hu Yun of Hong Kong (Men’s Singles) and Hiroyuki Endo/Kenichi Hayakawa of Japan (Men’s Doubles) to prevent the Chinese sweep.

Hu Yun (pictured left) has the formidable task of taking down top seed Chen Long for the Men’s crown. The Hong Kong player was never threatened in his semi-final against India’s Ajay Jayaram. After 10-all in the first game, Hu Yun gradually widened the distance and came away a comfortable winner 21-16 21-18.

Chen Long entered the final without taking the court; teammate Du Pengyu handing him a walkover.

The most exciting match of the day was between young prodigy PV Sindhu of India and world No. 9 Jiang Yanjiao of China. Sindhu had surprised everyone by upsetting Olympic champion Li Xuerui in the quarter-finals and was expected to be a handful for Yanjiao as well. The last time the two met, at the India Open, Sindhu stretched her opponent to three games. Again, on this occasion, the rising star did not disappoint.

Jiang started well, using deceptive lefty flicks to constantly catch Sindhu off-balance. The strategy worked well and she was consistently able to fire winners down the flanks. The Indian world No. 24 settled down in the second game and her precise tosses to the baseline helped blunt Jiang’s attacking game. The match turned into a fascinating battle of wits. Sindhu, by virtue of her longer reach and steeper attacking shots, had Jiang in constant trouble and took the second game.

The match was again close in the decider and even though Jiang achieved a three-point lead at 15-12, Sindhu (pictured right) caught up and scores were again level at 19-all. The Chinese girl eventually secured the last two points to book a finals slot versus world No. 1 Wang Yihan. The latter encountered little trouble in her semi-final against Sapsiree Taerattanachai of Thailand who had earlier beaten No. 6 seed Liu Xin in the second round. The Thai was given no chance by the world No. 1 in a 21-13 21-9 defeat.