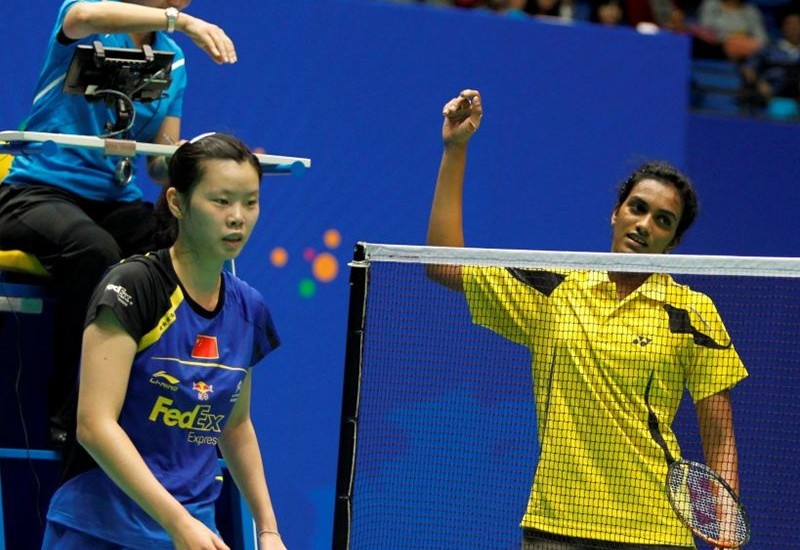 Previous results have hinted this teenage sensation could someday be among badminton’s movers and shakers but hardly would anyone have anticipated a performance of seismic proportions when she took the court against this year’s in-form female player. The outcome was completely unexpected as Xuerui has been nearly unbeatable since February. In fact, this was only Xuerui’s second loss in the last 39 matches – the other loss, incidentally, was against Sindhu’s senior compatriot Saina Nehwal in the final of the Djarum Indonesia Open. For her efforts, Sindhu will now tackle No. 4 seed Jiang Yanjiao in the semi-finals. The other half of the draw sees top seed Wang Yihan (pictured left) – the lone local remaining in Women’s Singles – squaring off against Sapsiree Taerattanachai of Thailand.

By contrast, there were no major surprises in the Men’s Singles. Top seed Chen Long (China) cruised past India’s Guru Sai Dutt 21-8 21-12, while his compatriot and fourth seed, Du Pengyu, beat younger teammate Wang Zhengming in straight games, 21-11 21-12. The two Chinese will face off in the semi-finals while, in the other half, India’s Ajay Jayaram takes on Hong Kong’s Hu Yun.

Jayaram was taken the distance by Indian national champion, Sourabh Verma, before prevailing 12-21 21-14 21-16. Hu Yun had little trouble against the impressive young talent Qiao Bin of China. The latter, who had come through two qualifying rounds and had upset No. 6 seed Hans-Kristian Vittinghus in the second round, could not repeat that feat However the spotlight was all on Sindhu (pictured right) whose upset of Xuerui became the talking point of the China Masters. The lanky girl from Hyderabad in south India has for long been considered as a bright prospect, but few could have expected her to achieve such a big victory so quickly. The 17-year-old, who won the Asian Youth title in July, maintained a narrow lead over Xuerui all the way through in the first game.

The London 2012 champion hit back strongly, reeling off eight straight points in the second game before Sindhu could get one of her own. Xuerui won the second game 21-9 and looked well on course for a place in the semi-finals. Sindhu, though, was undaunted by that setback and her morale remained high. She built a small lead early in the decider and never let Xuerui close, eventually taking the game at 21-16 – and with it an unforgettable victory.