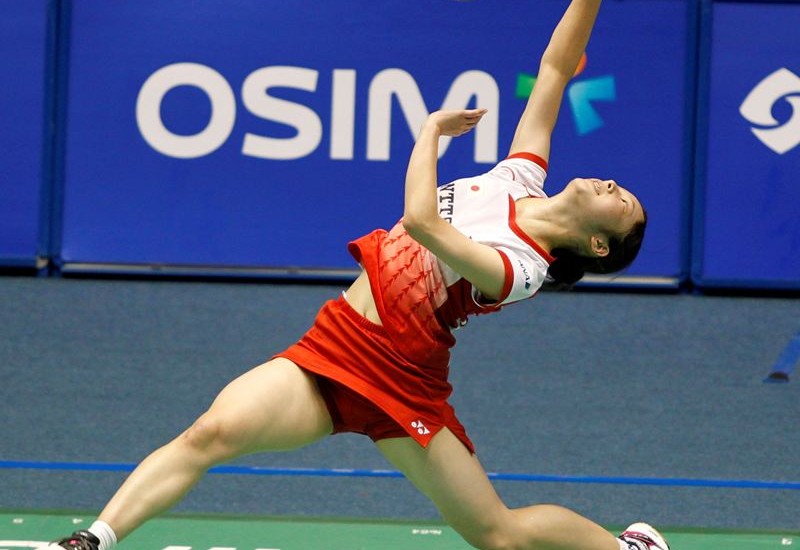 The Li Ning China Masters saw a clutch of upsets today – with world No. 3 Wang Shixian stunningly among the high-profile victims.

Those who also tasted defeat included No. 6 seed Hans-Kristian Vittinghus, Jen Hao Hsu (Taipei) and eighth seed Parupalli Kashyap (India) in Men’s Singles, and Porntip Buranaprasertsuk (Thailand, No. 8 seed) and Liu Xin (China, No. 6) in Women’s Singles. Second seed Chen Jin too bid goodbye but without taking the court against Hong Kong’s Hu Yun. He conceded by a walkover. However, the talking point must have been Shixian who was shown the door by Minatsu Mitani (pictured left). The Japanese girl’s record over the last three years has not been extraordinary and her biggest victory to date was against No. 3 Wang Xin at the Badminton Asia Championships in April 2011. In fact, Shixian had beaten her in straight games in all the three matches they played last year.

Mitani shocked Shixian by surging ahead from 9-all to 19-11 and took the first game easily. Although Shixian did fight back from 14-17 to 17-all in the second game, Mitani held her nerve when it mattered to send one of the hometown favourites packing 21-13 21-18. Among the other surprise losers were Parupalli Kashyap of India and Porntip Buranaprasertsuk of Thailand. Kashyap has been in good form since June – he reached two Superseries semi-finals in a row and the Olympic quarter-finals. Today he fell tamely to compatriot Guru Sai Dutt, who trains with him at the Pullela Gopichand Academy. Kashyap won the first game but Guru levelled in the second and Kashyap’s challenge melted in the third which he lost 21-4.

Their fellow trainee at the Academy and Asian Youth champion, PV Sindhu (pictured right), provided further evidence of her growing stature with a hard-fought win over world No. 14 Porntip Buranaprasertsuk. Sindhu, ranked No. 24, overcame a 9-14 deficit in the third game to edge past Porntip 10-21 21-7 21-19 in 47 minutes.

Meanwhile, the big guns stayed on target. World No. 1 Wang Yihan and No. 2 Li Xuerui remained on course for a meeting in the final, while Men’s Doubles, second seeds Hong Wei/Ye Shen booked a quarter-final against Songphon Anugritayawon/Sudket Prapakamol. No. 1 seeds Hiroyuki Endo/Kenichi Hayakawa likewise progressed to the quarter-finals by outclassing fellow Japanese Takuto Inoue/Yuki Kaneko 21-14 21-15.