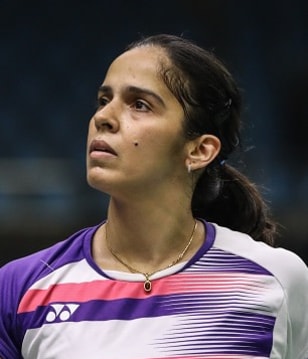 Any previous Olympics Games competed in and results?
"Beijing 2008 - My quarterfinal loss to Maria Kristin Yulianti where I was leading 11-3 in the third game is one of the most unforgettable moments in my life."

When and where you began playing, and why this sport?
"My father and mother were badminton players, so I also opted to be a badminton player. I started playing the game at the age of 9 years old at Hyderabd AP, India, in May 1999."

Your training regime?
"3 sessions a day. Morning 7am to 9.30am (warm up exercises, shadow practice and practices on court like dribbles, drop shots, and practice of game), second session at 10 to 12 noon on court practice, evening session (running, amusement, weight lifting and gym and sometimes we head outdoors for trainings)."

Sporting ambitions?
"To be the World Number 1 in badminton and to win an Olympic medal."

9 January, 2020
Glimmer of Light for Nehwal in Defeat of An Se Young