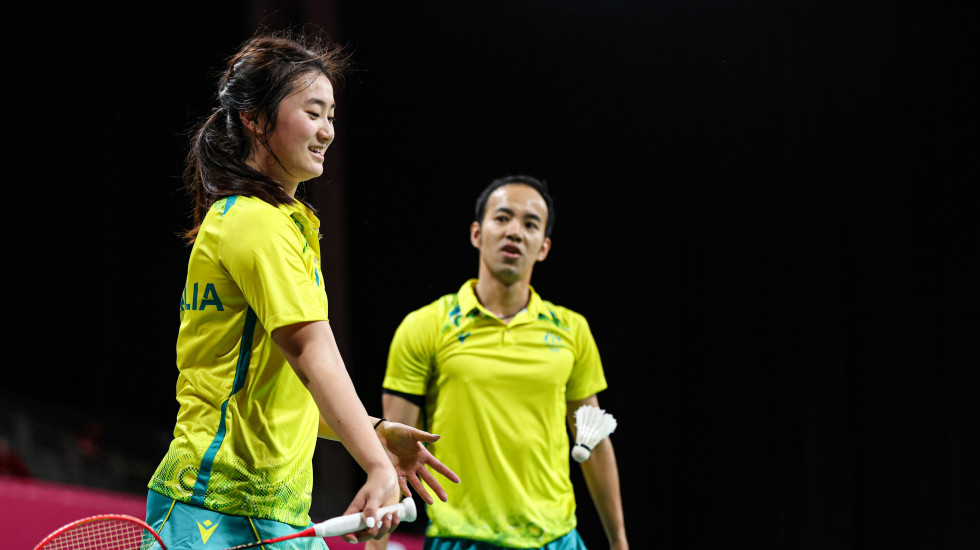 Jamaica’s Sam Ricketts and Tahlia Richardson gave a good account of themselves in the mixed doubles Round of 32 before falling to Australia’s Jack Yu and Kaitlyn Ea.

The Jamaicans stretched the Australians by taking the second game before eventually falling 21-13 16-21 21-8.

“It’s been a while since we’ve been on these courts so we’re slowly getting our feeling back,” said Jack Yu.

“We made a lot of mistakes in the second game, but got our confidence back and communicated more in the third. It still feels great (to play on the match courts) but the audience isn’t as big, I am missing playing on the show court.”

“I think we’re improving as we continue playing, our communication is getting better, encouraging each other is key,” added Kaitlyn Ea.

Penty Too Good for Tang

Australia’s Nathan Tang took on England’s sixth seed Toby Penty. Undeterred by the vocal home crowd, Tang endured some long rallies against the world No.54 – their longest spanning over 48 strokes. Penty however was able to maintain a consistent high speed, with an accurate and patient game to outwit the Australian, 21-11 21-7.

“That is the biggest crowd I’ve ever played in front of, I wish I played a better match but overall I’m quite happy,” said Tang.

“There were some fantastic rallies but Toby is just another class above, I tried to keep with him as long as I can. He must be sore from his bronze medal match, so that was a tactic I was trying to play on, but again, he’s just on another level. He is able to maintain a base speed, yet doesn’t need to do anything over spectacular and is therefore able to put a lot of pressure on me. I don’t find the home crowd intimidating, I’m just soaking it all in, I wouldn’t have it any other way.”

New Zealand’s Oliver Leydon-Davis and Anona Pak celebrated their first appearance of the 2022 Games in style, on the show court. The seventh seeds have been training in the venue for the last week and today they were able to experience the playing conditions in front of a large audience. Making her debut appearance, the win will help Pak ease into Friday’s Round of 16 alongside Leydon-Davis, who is making his fifth Commonwealth Games appearance.

“It took a little bit of getting used to, but we started to get a better feeling for it by the end. The atmosphere was unreal, and we’re feeling good about the performance, it was better in the last half of both games but we’re just trying our best to get used to the conditions,” said Leydon-Davis, after they beat Alexandre Bongout/Jemimah Leung of Mauritius 21-7 21-10.

“That was amazing – I loved the cheering, and I knew there were friends and family watching from New Zealand, they woke up very early. My friend was in the crowd too with a poster which was so big, she even had to cut it in half,” said Pak.

♦ Canada’s Brian Yang, one of the contenders for the men’s singles gold, withdrew from his Round of 32 match against Jamaica’s Sam Ricketts.