As part of the World Badminton Day festivities, BWF took AirBadminton to the city of Hamburg in Germany to celebrate the inaugural occasion with an AirBadminton Urban Series test event.

Competing in Germany’s north coast city as part of the Active City Arena Festival on 4-5 July, national badminton teams from France, Belgium, the Netherlands, and Germany participated in the World Badminton Day event with the sea as a backdrop, and sand for surface.

The two-day competition comprised of a mixed team event where the winner of a tie is the team reaching 100 points first over five games. Each tie consists of five matches – one women’s doubles, one men’s doubles, one mixed doubles, and two triples.

And finally, a mixed doubles event was the best of five games, with the first to 11 points.

“It’s been great playing AirBadminton in Hamburg and were are happy to be the winners. The wind was challenging at some points, but we adapted and used it to our advantage, and we believe that was the key to winning the final. We look forward to competing at upcoming AirBadminton events as this is a lot of fun and an exciting way to play our sport.” 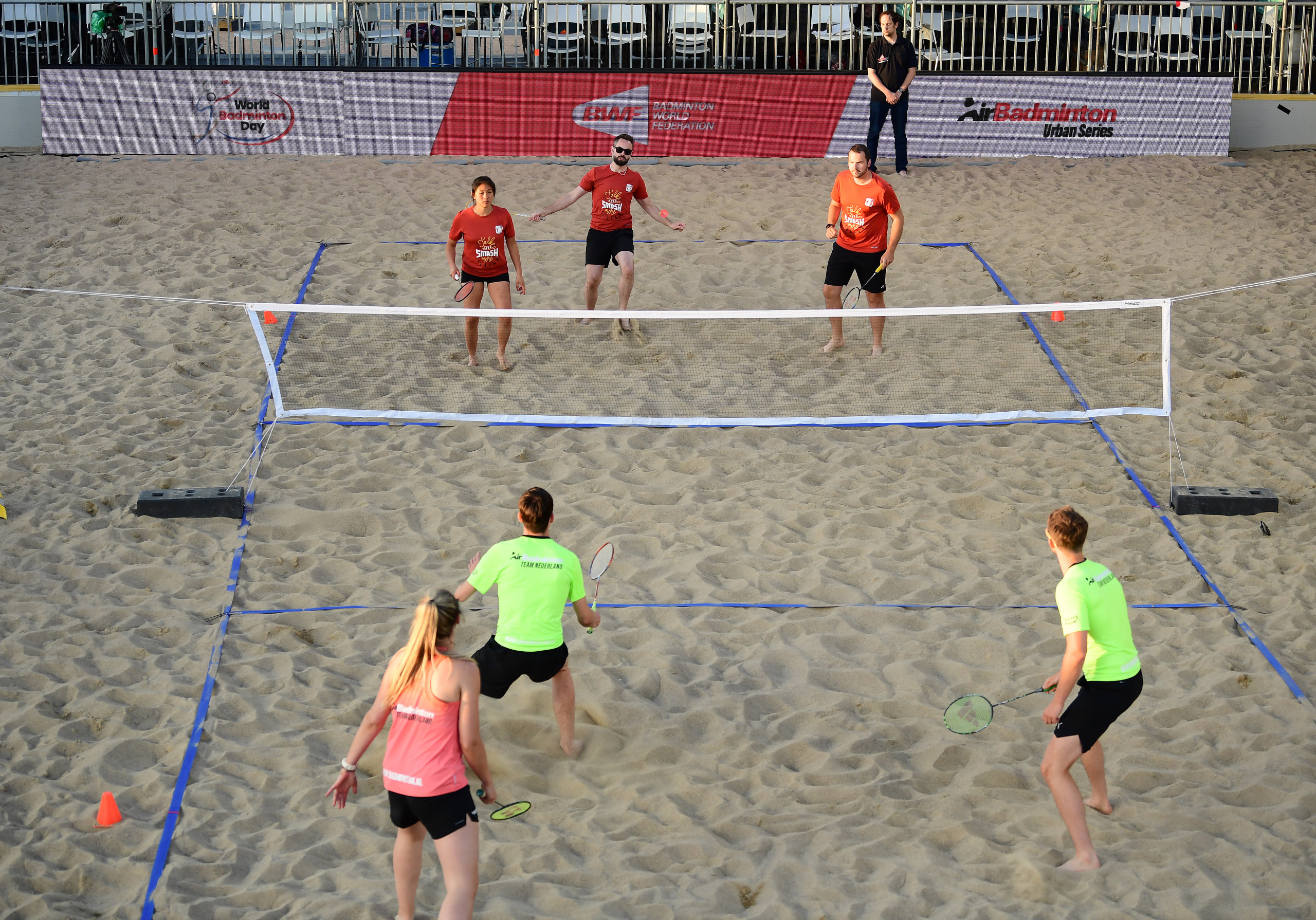 Take me on: AirBadminton can be played three-on-three.

The Urban Series in Hamburg presented a unique opportunity to position AirBadminton as a young, innovative and urban sport, and the BWF is positive the event will inspire players and fans to look for opportunities to play AirBadminton beyond their experience in Hamburg.

The Hamburg event was open to the public.  One spectator, Gisbert Benecke, remarked how much they enjoyed the sport.

“I haven’t seen anything like this, playing badminton outdoors in a competitive form on the sand. It is pretty spectacular in terms of athleticism, the diving, the movements, and the easier rally situations due to the flight of the AirShuttle,” said Benecke.

AirBadminton takes an approach different from what most badminton fans might expect. The modified rules emphasise speed and outdoor dynamics transform the game into an entertaining spectacle for players and audiences. 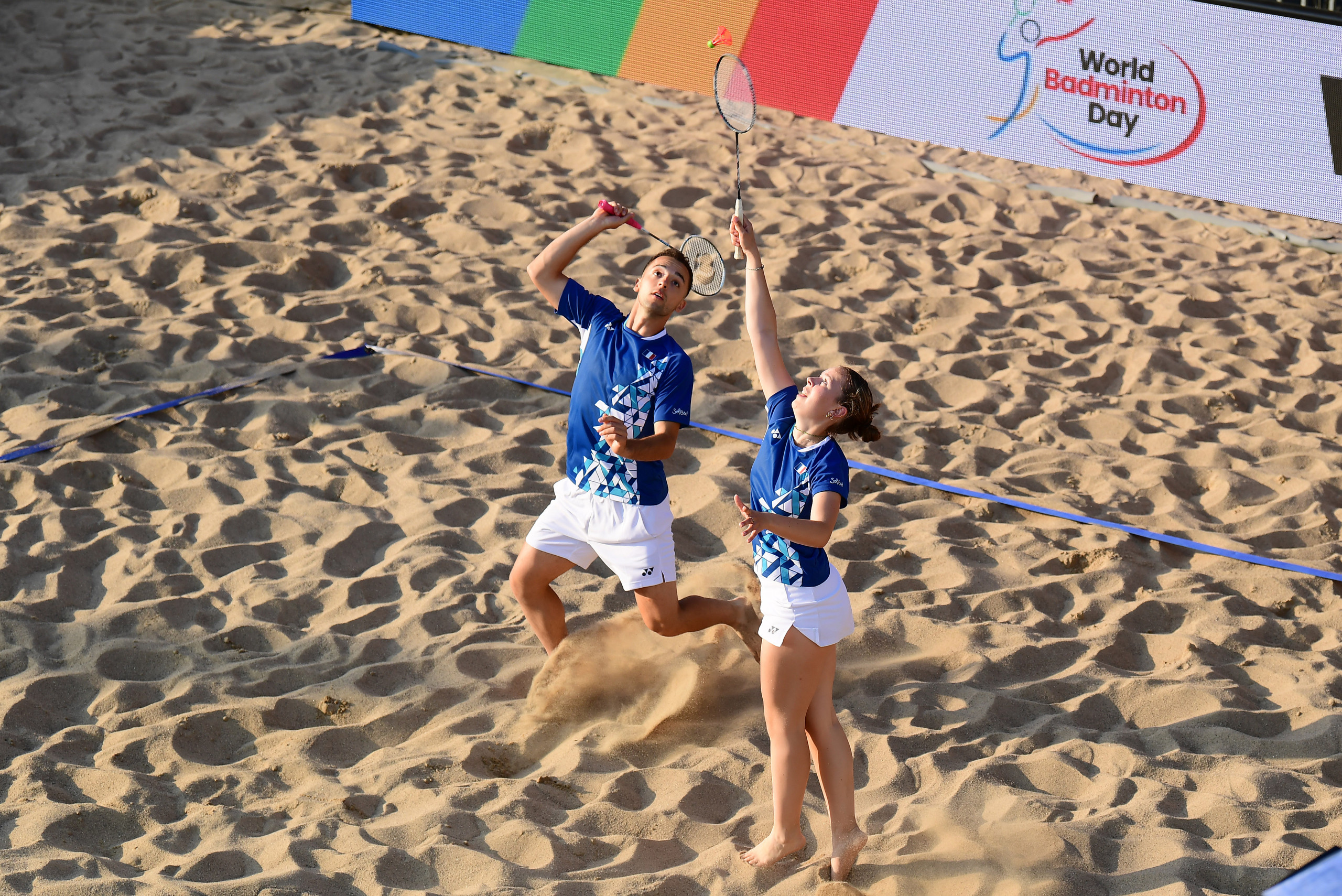 AirBadminton is an ambitious development project designed to create opportunities for people of all ages and abilities to play badminton on hard, grass and sand surfaces in parks, gardens, streets, playgrounds and beaches around the world.

AirBadminton is fundamentally similar to indoor badminton. However, there are several differences that affect players’ strategies, gameplay and techniques.

The end goal is to create a new concept of the game, with the potential for a highly attractive form of competitive badminton, with a key focus on global participation.

The regular version of badminton is already a popular, fun and inclusive sport with more than 339 million active players globally, encouraging participation and excitement with many health and social benefits.

This new format of the sport allows even more people to play the sport, as well as get them outdoors more and exposure to vitamin D, which some medical experts consider to be important in fighting COVID-19 (according to a study by Busby M. 2021).

Want to give AirBadminton a go yourself?  Find out everything you need to know in our AirBadminton Explainer video, and on www.airbadminton.sport.

The next stop on the Urban Series tour will be, Utrecht, in the Netherlands in September.