Susy Susanti with the trophy-winning team.

It was a teary Susy Susanti, PBSI’s Head of Development and High Performance and former Olympic champion, who celebrated with the Indonesian team after they’d won the BWF World Junior Mixed Team Championships for the Suhandinata Cup.

Indonesia haven’t had much luck in team events at the senior or junior level in recent times. Their last major team victory was at the Thomas Cup in 2002, and while the Suhandinata Cup cannot compare with that, it will provide some relief, and much hope, as the country looks to recapture some of the aura of its golden days. 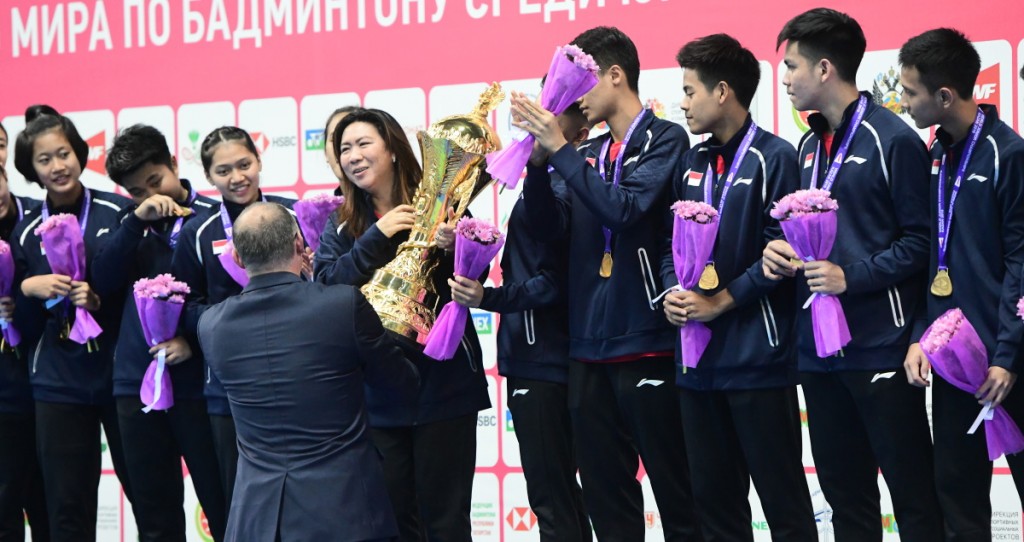 Susy Susanti all smiles as she receives the trophy.

“This win is very good for PBSI because the team has young players and it’s good for the spirit of the next generation. They have good potential and should be able to do well when they get to the senior level.”

Victory didn’t come easy despite the Indonesians’ 2-0 lead and four match points in the third match. Susanti said the loss in the men’s singles did not deflate them and they believed they could pull off one of the two remaining matches.

Susanti in the stands with her players.

Susanti said a year’s preparation had gone into making the team tournament-ready.

“We had the Asian (Junior) Championships and all the players have been at the training camp for a year for this tournament. This year we had good players in every category. They learned from previous experience as they lost the Badminton Asia Junior Championships final (to Thailand) after leading 2-0.”

Indonesia have had trouble producing talent consistently in categories such as women’s singles and women’s doubles, but Susanti is looking to the current batch of juniors to step up.

“We hope some of these players can do well when they get to the senior level. I’m very hopeful.”