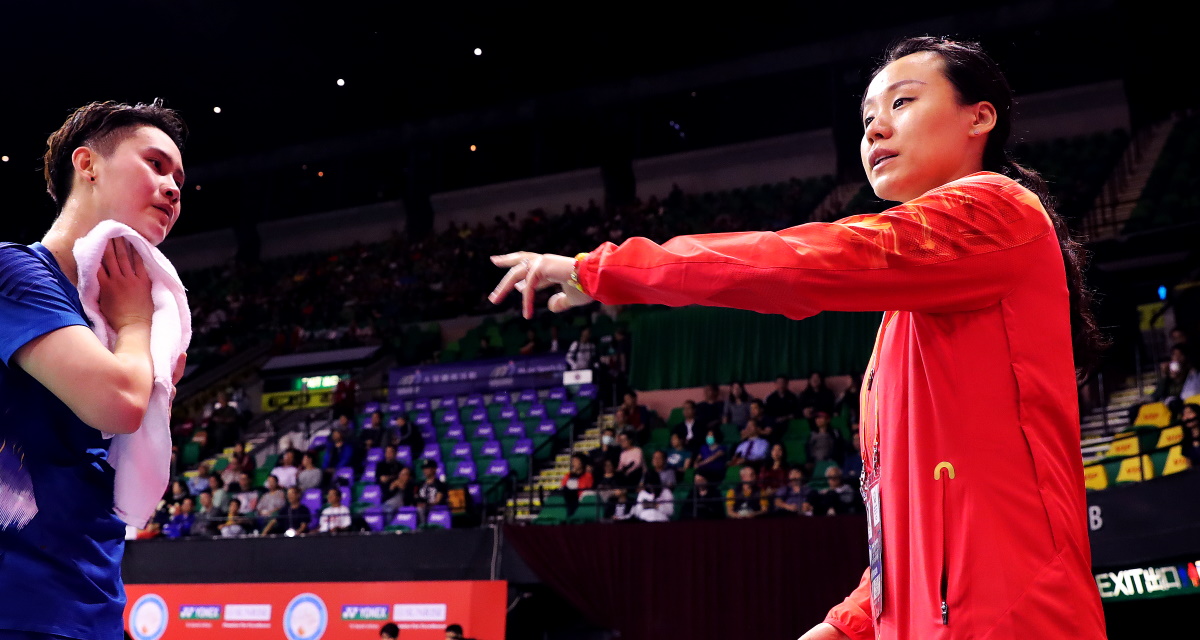 Chinese legend Zhao Yuneli has lately been seen in a coaching role.

This is part of the series of feature articles highlighting some of the main talking points from the BWF World Coaching Conference 2019. The BWF has also provided complete highlights of each guest speaker plus their presentations. Please CLICK HERE to access the full conference schedule and relevant materials.

The role of the female player in mixed doubles is not just to set up points for her male partner, but to be proactive in winning points herself, emphasised Chinese legend Zhao Yunlei in her presentation at the World Coaching Conference in Basel. 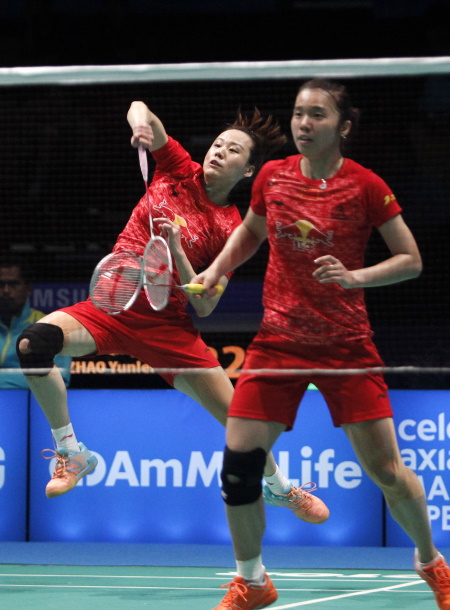 Zhao Yunlei was noted for her all-round prowess.

Women players are now increasingly adopting approaches that defined the men’s game; to do this required training in speed, aggression and net variations, said Zhao, as she demonstrated a few exercises in developing these qualities to an audience of coaches from several countries.

Zhao embodied these qualities in a stellar career that saw her achieve a “doubles double” at two World Championships, and a double at the Olympic Games. Successful with several partners, but most prominently with Zhang Nan in mixed and Tian Qing in women’s doubles, Zhao’s brilliance in converting defensive positions into attack helped her establish a dominant reign in both disciplines.

Zhao’s presentation was on a few basic principles that she demonstrated on court.

Zhao referred first to the position of the woman player under attack. Instead of standing back in the court to defend, she had to step up, which allowed lesser time for her opponent to react. Secondly, she had to position herself close to the tramlines, giving her better angles to work with on her defence.

“The traditional way is for the woman to force the lift. In this exercise, she will counter-attack and rush forward and be more aggressive and try to finish the rally. The point of pressing is to put more pressure on your opponents rather than just setting up the lift for your partner, and it’s about taking initiative from the mid-court and front court.” 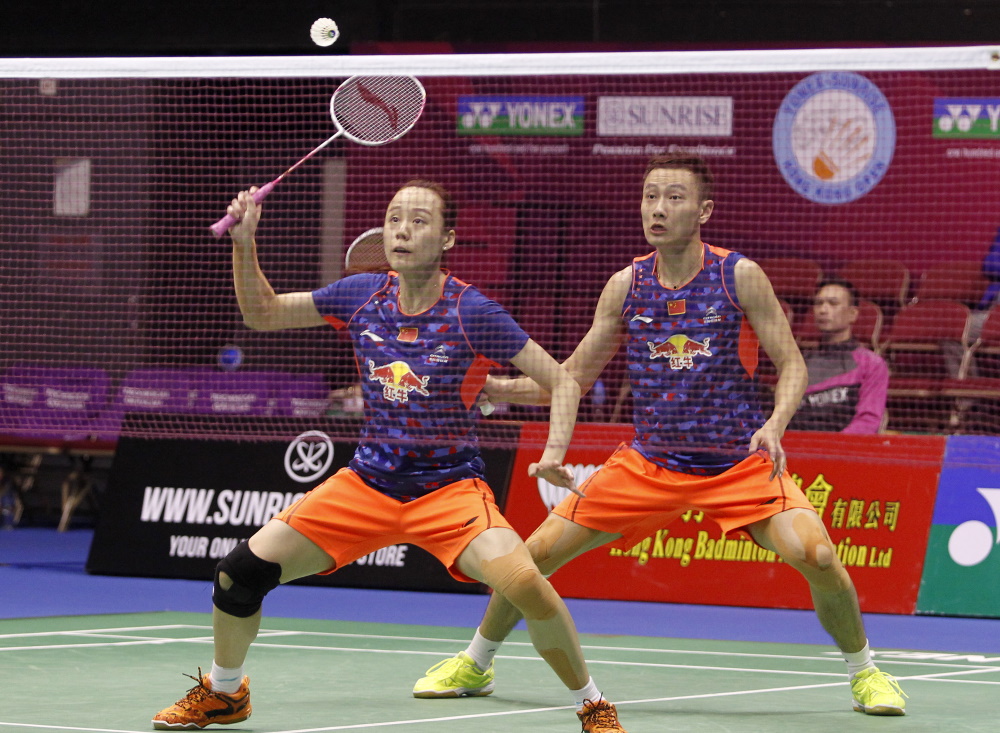 Copybook position by Zhao at the net.

Another exercise involved playing the net shot, which was the area a female mixed doubles player had to excel in. It was key, Zhao explained, for the racket head to be always held up.

“It’s a common problem for girls that the racket head is always low. The racket head should always be up. Keep the net tape as a guide. If the shuttle falls below the tape, you stay low by bending at the knees, but still keep the racket head up.”

The third exercise she demonstrated was useful to disrupting tempo. This consisted of a few straight shots, followed by the sudden block with the same action.

Zhao pointed out the fundamentals to the successful execution of this exercise: “Use a short backswing, squeeze the handle during the shot to generate power; take the shuttle early before it drops down. 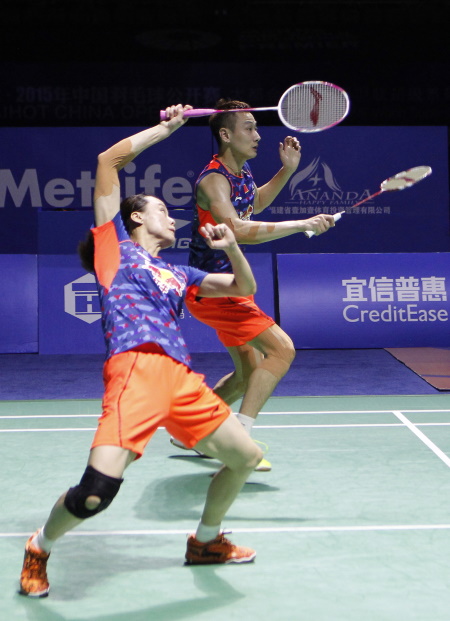 “We don’t need to hit hard all the time; that you’re attacking doesn’t mean it has to be hard. Use variations, change the tempo sometimes.”

Zhao was a standout even in China’s distinguished lineage of great mixed doubles stars. Speed, she says, was important to China’s dominance of the discipline.

“Speed has always been the priority in mixed and doubles. China have worked a lot on women to increase the speed and get them to dominate the front court and make them more dangerous. All those areas, the efficiency, faster racket, taking the shuttle early, these are small details you need to improve.

“In mixed doubles… the female role is quite essential because they are setting up points, so whether the girl can play at a high tempo is the deciding factor. The mindset for the female mixed players should be quite close to men’s doubles. You want to take the shuttle early and become dangerous in the front court.”

Perhaps the one quality above all others was persistence. Zhao spoke of the grind that went into making her one of the greatest in the game.

“I started playing when I was eight years old, and I retired when I was 30. I didn’t get one day off in my entire career. Persistence and resilience are what kept me going. In 2009, I lost all my finals. That was a big challenge. I thought, instead of losing in finals, it was better that I lost in the first round.

“I was very frustrated but I told myself to keep going, until the day I won a final and felt I’d overcome something. I always had challenges, whether physical or mental or my environment, but what kept me going was persistence.”