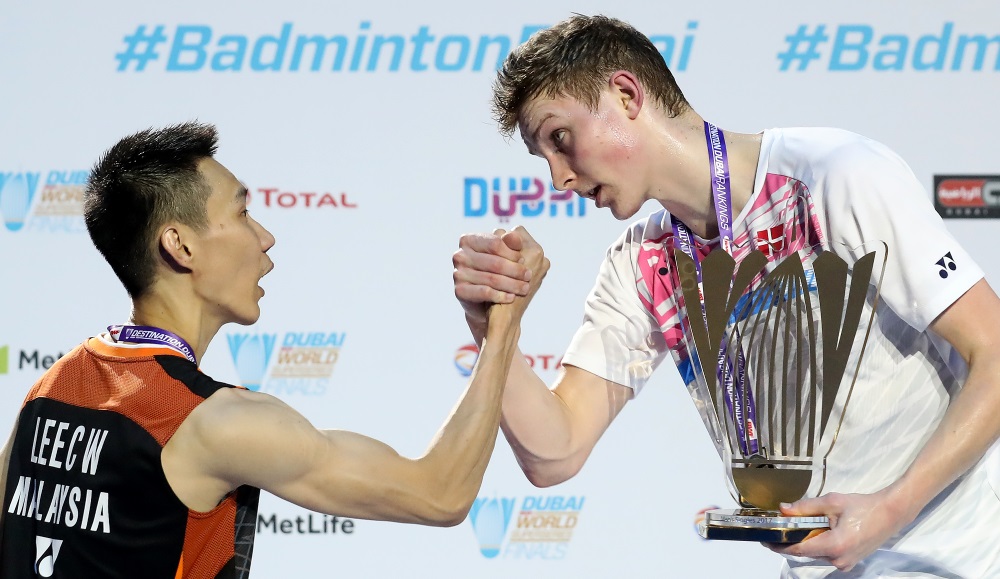 Viktor Axelsen brought down the curtains on the event where his year-long stellar run began – the Dubai World Superseries Finals – with his fourth Superseries crown today.

For the second time this year, Pusarla finished second-best to a Japanese in a major final that turned out to be a classic.

And just as Nozomi Okuhara outlasted the Indian in the TOTAL BWF World Championships final earlier this year in a 110-minute marathon, Okuhara’s compatriot Yamaguchi displayed the same sterling qualities in breasting the tape ahead of Pusarla in 94 minutes.

Yamaguchi’s triumph was the finest moment of her still-young career; the magnificence of her victory accentuated by the grandness of the stage on which she delivered it.

From the beginning, it was apparent that this was a contestation of warriors with contrasting

qualities and approaches. Pusarla had the heavy artillery, and she pounded Yamaguchi’s fortifications without let-up during the early exchanges. With her lanky frame helping her deliver sharp clips and full-blooded smashes on either flank of her diminutive opponent, Pusarla was up and running before Yamaguchi got to grips with the attacking Indian.

The match took on a different character once the Japanese found her length. The nagging accuracy of the deep tosses began to hurt Pusarla; Yamaguchi dragged her back and forth across the court, making her lunge an extra step to reach the hairpin netshots that she conjured. Yamaguchi’s defences in better order, it was she who dictated the direction and tempo of every rally.

Pusarla’s attack had been blunted with stodgy defence; the hunter, had, in effect, been forced into a battle of attrition with the hunted. Denied the opportunities for the outright kill, Pusarla was caught in a reactive mode, but still showed great character to hang in. Given the long drawn-out exchanges, there were sudden shifts in momentum. Yamaguchi was on a good run early in the third, only to lose patience and attempt to finish the rallies quickly, which played right into Pusarla’s hands; the Indian inched ahead at 13-9. Yamaguchi returned to type, and the match took on the contours of the famous battle between Okuhara and Pusarla not so long ago. On one occasion, with both sprawled on the floor after another excruciating rally, the crowd honoured them with a standing ovation.

At the very end, a couple of soft errors from Pusarla gave Yamaguchi the breathing space she needed. A final error from Pusarla drew curtains on her challenge. Unusually for her, the Indian teared up while describing the heartbreak of another loss in a major final: “Of course, it’s really hard. The same thing happened in the World Championships. I have to let it go, it was a good week overall. I’d like to congratulate her. It happens.”

Yamaguchi, in her understated manner, acknowledged that this was the high point of her career: “This is the biggest moment. I’m happy I recovered from my defeat to her in the group match. That it was such a challenging match and to win through that is an incredible achievement. There were long rallies, but I was leading at the end, that gave me confidence. I knew she was getting slower at the end, but I knew she had enough energy to move quickly.” Axelsen, younger and hungrier, wore down Lee. The Malaysian had his chances to take the match in the second, having erased a 14-19 deficit. Two mistakes at the critical point let him down.

Lee had been the more creative of the two, but Axelsen scrambled around and kept the points going, and his older opponent flagged with each lengthening rally. The third game was all Axelsen’s; with both players unable to score quick smash winners, Lee opted for placement and high clears; he needed to convert the sudden openings, but the final touch deserted him. Axelsen refused to let his foot off the pedal, and there was an air of inevitability about the result early in the third even though Lee got to within a few points.

“In the second game he had a big lead, I got close but at 19-all I made a mistake on serve,” said Lee. “Viktor played better – he is younger. He was fast and was attacking all the way. He was quite confident.”

The champion, having completed his second victory in Dubai, could only marvel at his run of form: “Amazing feeling. I feel pretty awesome, to be honest, especially after such an amazing game. It’s what you dream of when you start off playing badminton as a kid. After losing the first game I tried to put on the positive glasses, so to say. I knew I had to work hard and I did that. I’m proud that I kept my cool and could go all the way.

“I seem to play pretty well here in Dubai. The tournament has been pretty good. Winning here kickstarted it all for me, and to win two titles here was great.”