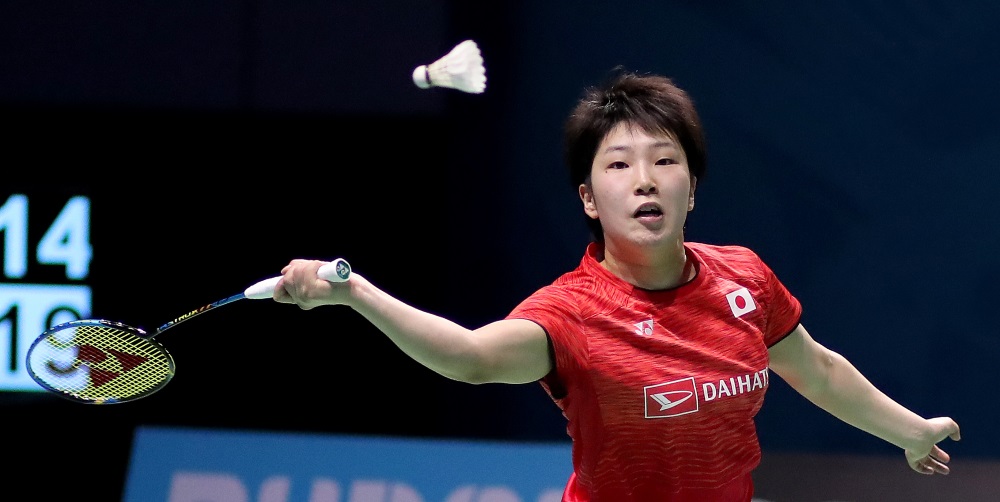 In the final tomorrow at Hamdan Sports Complex, Axelsen faces familiar foe Lee Chong Wei (Malaysia), a four-time champion at the World Superseries Finals who has never triumphed in Dubai.

Yamaguchi’s in-the-trenches resolve saw her fight out of trouble against Thailand’s Ratchanok Intanon.

The Japanese had a mountain to climb at 11-16 in the third game of an engrossing semi-final against Intanon, but staged a magnificent rearguard action to outlast the Thai 17-21 21-12 21-19 and make her first Dubai final.

The match showcased the finest of two contrasting styles – Intanon’s creative shotmaking versus Yamaguchi’s defensive prowess. Intanon was in full flow during their early exchanges, and she had her opponent in a reactive mode all through as she found the gaps with ease.

Yamaguchi however bounced back quickly, shooting to a 12-2 lead in the second, from which Intanon couldn’t recover.

It was all even at 10-all in the third; Intanon appeared to get the decisive lead as she once again had her opponent chasing the shuttle. At 16-11 and 18-14, the end was in sight, but it was at this moment that Intanon got drawn into a trap.

With the game going well for her, the Thai told herself to calm down – however, in so doing, Intanon didn’t push herself into shutting the door in time. Yamaguchi, in keeping with her style, ground her way back, retrieving tirelessly, and with the points getting long, Intanon could feel her legs losing strength.

“I thought it was already my game,” Intanon said. “I felt it was my day, I just stayed calm – I was too calm. I realised she got into the game, and she tried to play faster, and I played into her hands. Then I got too nervous.

“It was a tough game for me; yesterday too I had a tough match. My legs weren’t moving well, I tried to hold on. I tried to slow it down and not commit too early. I knew my legs couldn’t speed up, I tried not to make mistakes. My legs got slow; the shuttles got easy for her.” Pusarla had her hands full against an opponent who was always in the right place at the right time. It was the Indian who had to do all the hard work, but the progress was incremental – Pusarla stitching up a lead, only to see Chen pulling close.

At a game and 15-11, the Indian had found momentum. Chen however was tenacious, and with every rally, Pusarla started to flag under the pace. A 57-shot rally found Pusarla bent over, with Chen narrowing the lead to 17-19. The Chinese teen showed her inexperience and faltered on the last couple of points to enable the Indian to slip away at 21-15 21-18.

“It was a good quality match, even though it was over in straight games, there were a lot of long rallies. “I was smart to take two or three points when she caught up with me. It’s like a home crowd. It’s good to see so many Indians supporting me here. I’m not going to expect anything tomorrow. It might be a long match. It won’t be as easy as it was yesterday (against Yamaguchi) when I had a 11-2 lead.”

Viktor Axelsen made his third straight final in Dubai with a crushing 21-12 21-8 result over China’s Shi Yuqi.

Axelsen stamped his dominance on the match from the beginning, showing greater intent than he had during his loss in the group match to Shi. The big Dane was all hustle, creating openings and killing the shuttle with precision. Shi was troubled by a blister in his left foot midway through the second, but the momentum had completely swung Axelsen’s way long before that.

“It was a new day; unfortunately it seems like he suffered a bit,” said Axelsen. “I’m happy with the way I played. I felt a little bit (strain) in my back at the end of the second game; it’s okay now. I accepted that I might not be 120 percent. I’ve been in the final three times now, I hope I can make it two wins. I’m happy to be here, it’s an awesome place, and I’m enjoying it.” Lee Chong Wei had blown a big lead against Son Wan Ho yesterday in their group clash; today the Malaysian did not give his opponent an inch.

The four-time champion was all business throughout; the closest Son got was at 12-14 in the first, after which Lee steadily pulled ahead. It was even more one-sided in the second game, and Lee completed proceedings in 49 minutes at 21-17 21-11.