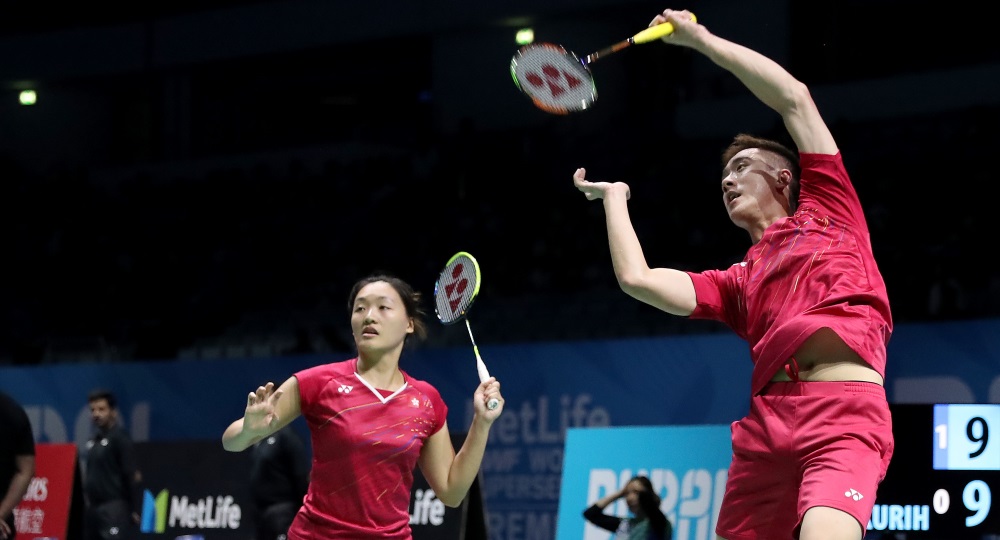 Shi Yuqi created ripples today in Group B of Men’s Singles, working his way to a dogged upset of

What made the result particularly memorable for Shi was that Axelsen looked like he could do no wrong through the early part of the contest, overwhelming the Chinese with his big attack and inventive shots. After slipping mid-match, the Dane once again powered ahead to establish big leads at 9-2 and 16-11, but a stubborn Shi refused to cave in. The Chinese hung on in grim circumstances, not letting Axelsen get away with quick winners, and as he inched his way back, there was a distinct drop in the Dane’s level. The end came quickly, with Shi nicking the last five points to claim the win: 13-21 21-18 21-17.

“It was my first match against Axelsen; I was unfamiliar with his game initially, and I took some time to get used to it. I wasn’t frustrated when I lost the first game. Viktor smashes very hard, so I’d decided that even when he smashed past me, I wouldn’t dwell on it. I tried to minimise my unforced errors. It’s all gone well so far for me with two wins; it feels magical in my first World Superseries Finals.” Meanwhile, in Group A, Hong Kong’s Ng Ka Long kept himself in the hunt for a semi-final place beating top seed Son Wan Ho (Korea). Ng, who was blown away in his opening match yesterday by Malaysia’s Lee Chong Wei in 40 minutes, produced his best under pressure in the third game, staying solid in long rallies and forcing the eventual error from his Korean opponent. The group qualifiers to the semi-finals will now be decided in the final match between Lee and Son.

“I’m very excited. I’m in a tough group and the target was to win a match in the group so I met my target and I’m hoping to secure a place in the semi-finals,” said Ng.

“Both of us were running out of stamina. What made the difference was that I was more determined. It was tiring, but I kept telling myself that I have to be focussed.

“Qualifying to Dubai means we are the top players and it’s my great pleasure and honour to be here and I hope I can be competing in future editions. Now it’s up to the last match and I will be here tomorrow, I hope Lee Chong Wei can win.”

Women’s Singles Group B saw Ratchanok Intanon (Thailand) beat defending champion Tai Tzu Ying (Chinese Taipei) and China’s Chen Yufei get the better of Korea’s Sung Ji Hyun. The Tai Tzu Ying-Intanon match was evenly balanced in both games, but the Thai was sharper at the end to close it out 21-18 21-17 to edge ahead in her career record against Tai at 10-9.

“We both play a similar style,” said Intanon. “That also helps me anticipate her shots better. Most of our contests are very close. I’m very happy with the way I played at the end of both games.”

In Group A, top seed Akane Yamaguchi (Japan) pocketed her second straight win, sending China’s He Bingjiao crashing to her second defeat in a 21-14 13-21 21-8 result. Women’s Doubles Group A – the ‘Group of Death’- was thrown wide open with top seeds Shiho Tanaka/Koharu Yonemoto (Japan) recovering from their opening loss yesterday to stop China’s Huang Yaqiong/Yu Xiaohan 21-16 21-16. And with defending champions Chen Qingchen/Jia Yifan also notching up their first win, against Korea’s Chang Ye Na/Lee So Hee (Korea), the four pairs are evenly matched now with a win and a loss each. Mixed Doubles champions in 2015, England’s Chris Adcock/Gabrielle Adcock, were left in dire straits after a 18-21 21-18 21-14 loss to China’s Wang Yilyu/Huang Dongping, who have a foot in the semi-finals following their second straight win.

“We fell behind in the second game as we got a bit slow and we didn’t get much chance to get the attack,” said Tse Ying Suet. “But in the third we sped up and got more opportunities. We kept pushing harder. It seems to be going well, it’s our first time in Dubai and it’s been a good experience. Tomorrow we will face Zheng Siwei and Chen Qingchen, they’re such a strong pair, and have to be at our best.”