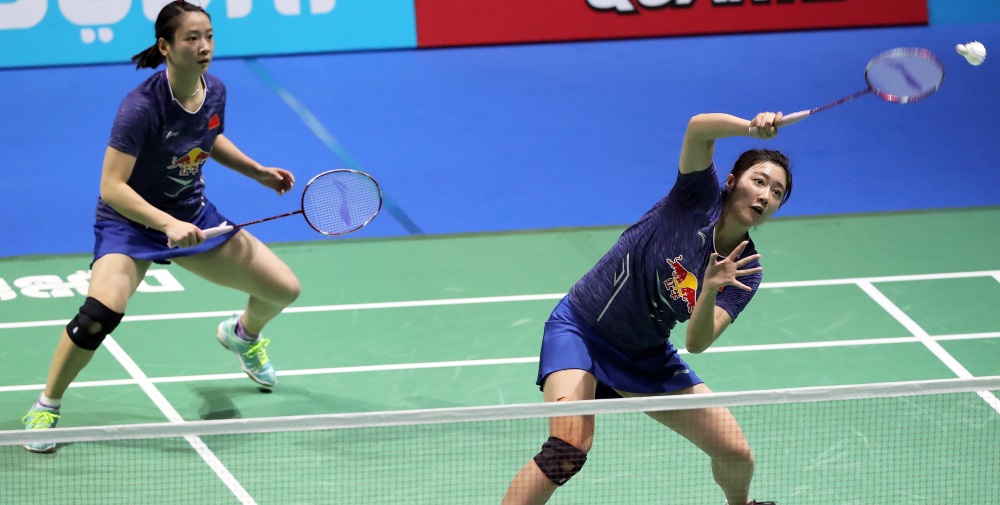 Defending champions Chen Qingchen and Jia Yifan were the highest-profile casualties in the opening session of the first day’s play at the Dubai World Superseries Finals, falling to compatriots Huang Yaqiong and Yu Xiaohan.

The Women’s Doubles Group A match turned out to be a tense encounter, with World champions Chen/Jia pulling level after trailing 4-10 in the third. The lead switched hands late in the game, and the defending champions had their noses ahead at 19-18, but the challengers were sharp at the end and wrapped up the victory 21-14 16-21 21-19 in exactly an hour. “It’s always difficult playing your compatriots,” said Huang Yaqiong. “We train together all the time and know each other’s game. We’re still getting used to the conditions here. We’ve had a good year; the Dubai World Superseries Finals has the best pairs in the world and winning here would be a big accomplishment.”

In another match in the same group, All England champions Chang Ye Na/Lee So Hee (Korea) rode roughshod over a pair they’ve beaten five times before, Japan’s Shiho Tanaka/Koharu Yonemoto. The Japanese stayed close until midway in the opening game, after which the Koreans pressed ahead; the second game was one-way traffic with Chang/Lee completing the rout 21-16 21-10. “When we saw our group, we knew we were in for some tough matches,” said Chang Ye Na. “It’s a good feeling to start with a victory and it gives us confidence for the matches ahead. It’s been a while since we’ve won a Superseries, and we’re hoping to rediscover the winning feeling. But there’s still some way to go before we can think of that. There are some strong pairs in our group; we’re just happy that we had a quick win today.” The top two seeds in Men’s Doubles also notched straight-games victories. Indonesia’s Marcus Fernaldi Gideon/Kevin Sanjaya Sukamuljo – winners of the Male Player of the Year award – were on a rampage against Denmark’s Mads Conrad-Petersen/Mads Pieler Kolding in Group A. The Danes weren’t allowed to catch a breath from the opening point with the Indonesians playing at breakneck pace and shooting to a 13-2 lead. The Danes fared marginally better in the second game but Gideon and Sukamuljo were never threatened, as they closed it out in 29 minutes: 21-6 21-16.

“The Danes are tall and their attack is quite steep; our defence was tested today. Usually it’s difficult to find rhythm early in the tournament, but today we were able to get going from the start,” said Gideon.

Second seeds Mathias Boe/Carsten Mogensen (Denmark) faced a much harder challenge in Group B from Japan’s Takuro Hoki/Yugo Kobayashi, who were on level terms until 18 in the opening game before their challenge fell apart. In Women’s Singles, two-time Dubai runner-up Sung Ji Hyun was a victim of her inconsistent display against Thailand’s Ratchanok Intanon; the Korean was unable to string together sufficiently long spells of her characteristic style of error-free badminton, and the Thai gained in confidence after a close first game to take the match 21-19 21-16.