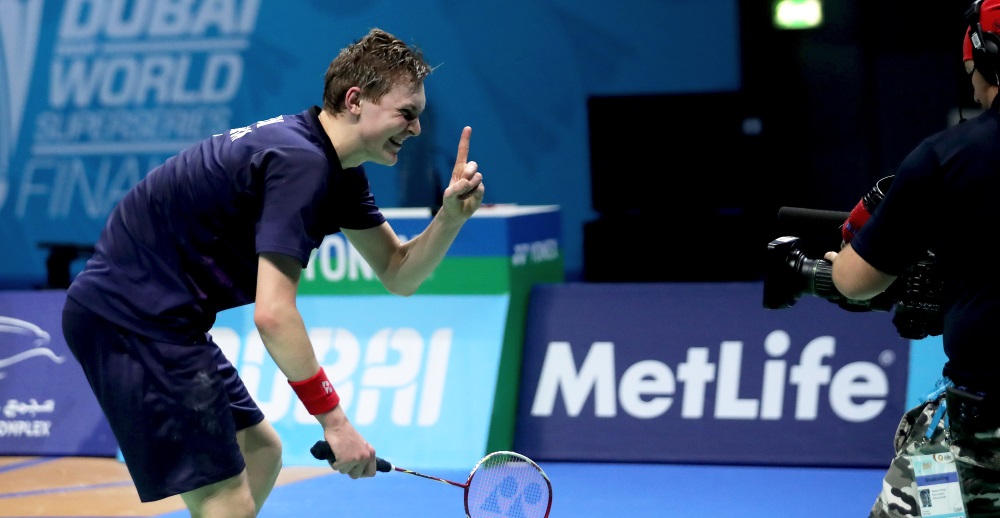 It was a year ago that everything changed for Viktor Axelsen.

Having fallen short on the ultimate step of a World Superseries title in six finals, there were questions around the lanky Dane’s temperament under big-match pressure.

Those questions were finally banished on the final day of the Dubai World Superseries Finals, when Axelsen overcame a 21-6 whipping by China’s Tian Houwei in the second game and stayed resilient to fashion a first Superseries title victory. Having got that under his belt late last year, Axelsen could do no wrong this season. The India Open was conquered – after two previous failures; and then it was on to the biggest stage of his career, the TOTAL BWF World Championships. The manner in which he overwhelmed two greats – Chen Long and Lin Dan – on successive days to claim the World title proved that the brittleness of the past had given way to a more complete package.

In Dubai to defend his title, Axelsen talks about his first Superseries title victory and the sensational season that followed:

The Dubai World Superseries Finals last year was your first Superseries title. Since then you’ve had some great results. How much of that would you credit to winning here in 2016?

You know, I think there’s a big difference between being in the final and winning it. After winning you relax a bit, you finally have the title. It definitely helped me loosen up a bit. Since then it has been good.

You’d been in six finals but had never won – were you getting frustrated? What made the difference last year?

I think that I was going into this tournament a bit more relaxed. I was here only because (compatriot) Hans-Kristian Vittinghus – unfortunately for him – became sick. And I had only one week of proper training. I went in a lot more relaxed and that was a good thing.

Maybe it was a little bit (frustrating), but it’s better to be in the final than in the quarter-final. On some occasions I lost out to better players. So I didn’t really think too much about it, to be honest. It was definitely a good thing for me to get the title here.

It’s more fun to win. A title is, you know, it’s hard to describe, but it’s more important. Winning Dubai made me more relaxed and that was a huge boost. It was great motivation to keep working hard.

Thinking back on the World Championships… it was nearly a perfect week for you, wasn’t it?

Of course, thinking back, it was great week for me. I played some of the best badminton I’ve ever played. Every badminton player dreams of winning it. It was a dream coming true for me.

Lin Dan had been in six World Championships finals previously and won five. Considering he had the experience and the mental strength in finals, how did you get your edge against him in his seventh final?

I think winning against him in the Olympic bronze medal match was a big boost for me, it gave me confidence that I could beat him in a big match. I was fired up, and I believed I could do it. I slept quite okay on the eve of the match. I had a good sleep part if you can say so. And Chen Long in the semi-finals? Even you look surprised at how quickly you finished the match.

I was surprised to beat him by such a big margin. I wouldn’t dare to hope; you keep thinking – now he comes, now he will start to play better – but I just continued to play better and better.

What changed for you after World Championships?

A lot of people started to give me attention, even more than in the past. It’s definitely different now, but I’m enjoying it, and trying to meet people. I’m still the same Viktor as I was two years ago, just with the World Championships gold medal now. I don’t look at myself as a different person. I’m just happy that people find my game and my results to be good.

Is the feeling different when you step on court as World champion? Definitely I’m more relaxed and more confident. A World Championships medal means a lot, it defines your career that you have a World title. I’m much more relaxed and enjoying it, and no matter what happens, I will always have my World Championships medal, my Thomas Cup title, which is so important for me, and something you chase for your whole career. It’s already happened to me, so I’m happy about that.

Would you say the big test starts now, as your opponents will be more driven against the World champion?

I think… every time you win something, there will be a comment that now it begins… that’s how it is. If you win two titles, it will be whether you can continue winning, and things like that. I don’t think about that, I take care of my own shop so to say.

Your first big title after the World Championships was the Japan Open against Lee Chong Wei.

Again, I was really happy to be able to play at a high level so shortly after the World Championships. After the Olympics, I had a hard time finding my level. So I was really pleased about that for sure.

Your thoughts on returning to Dubai…

Of course it’s been a long year, but I feel confident, I feel good. Training has been okay, no injuries, so that’s really positive.

And life outside the court?