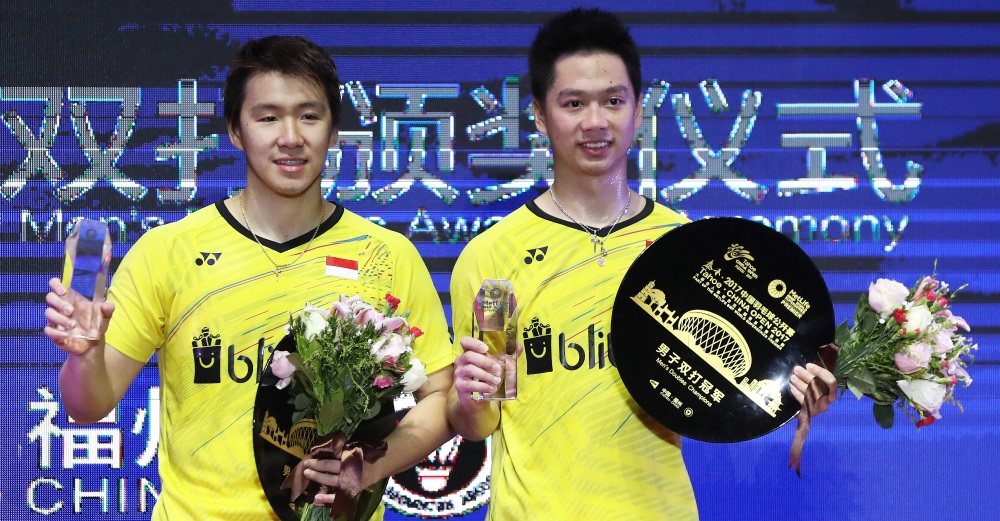 Marcus Fernaldi Gideon and Kevin Sanjaya Sukamuljo added to the lustre of their brilliant 2017 season, pocketing their fifth World Superseries crown this year from seven finals, at the TAHOE China Open

The Men’s Doubles final was a repeat of last year’s outcome, with Denmark’s Mathias Boe and Carsten Mogensen finishing runners-up once again, beaten 21-19 21-11 by Fernaldi/Sukamuljo – affectionately called ‘Minions’ by their fans.

The Danes enjoyed a good start and kept the Indonesians in check in a constricting first game, full of jabs and parries, with dominance of the forecourt determining its pace and rhythm. The tight leash the Danes had momentarily loosened at 14-all and the Indonesians slipped by. A weak serve by Boe was instantly killed by Sukamuljo and the Indonesians were on their way; growing in confidence, they got into their groove in the second, defending astutely, intercepting and picking off winners.

“We didn’t expect to make so many finals and win five Superseries,” said Fernaldi. “We are very happy, we try our best in every tournament. We don’t want to get too happy because there are two more to go.

“It was quite close in the first game. We managed to keep our focus at the end, and at 19 we handled the situation quite well. After losing the first game they were under pressure, so it became easier for us to adjust and press on. We’ve lost a few times to them. Today we played a bit better than before. We studied our losses and corrected our mistakes.”

“We’ve have to be at our best to beat them,” said Boe. “They’re very good, they play really fast, you need to be at your peak to beat them. That wasn’t the case today. They played better than we did. Credit to them for playing a really good match.”

Mogensen rued the missed opportunity in the opening game: “They play a typical Indonesian style. They played a bit faster today than they did in the semi-finals. They have a bit more confidence than other pairs at the moment, they don’t make easy mistakes. We have the level to beat them, but we need to play better than we did today. It would’ve been fun to see what would’ve happened if we had won the first game today.” At 7-2 in the third game of the Women’s Doubles final, Korea’s Lee So Hee and Kim Hye Rin were brimming with confidence, while at the other end, World champions Chen Qingchen and Jia Yifan looked downcast and low on energy.

It was a service fault by Kim that turned the final on its head, for the Chinese ran away with a sequence of points. With each point, Chen and Jia found their bounce once again. The momentary indecisiveness of the Koreans was jumped upon and punished, and it was a slide from there for Lee and Kim: 21-7 18-21 21-14.

“We managed to find our energy when we were trailing in the third game,” said Jia. “It’s good that Chen is playing only one event here, so we were able to focus.” “It was difficult for us, the Chinese played really well. But it seemed they were a step ahead all the time. Credit to them. We have to study this defeat because we believe we will have to play them many times in future,” said Pedersen.

“For us, it felt like Zheng and Huang have been playing for a long time. They’re already good together. Huang is so strong at the net, I was struggling to challenge her good enough today, I felt she was on top of me in many rallies. I have to challenge her better next time.”