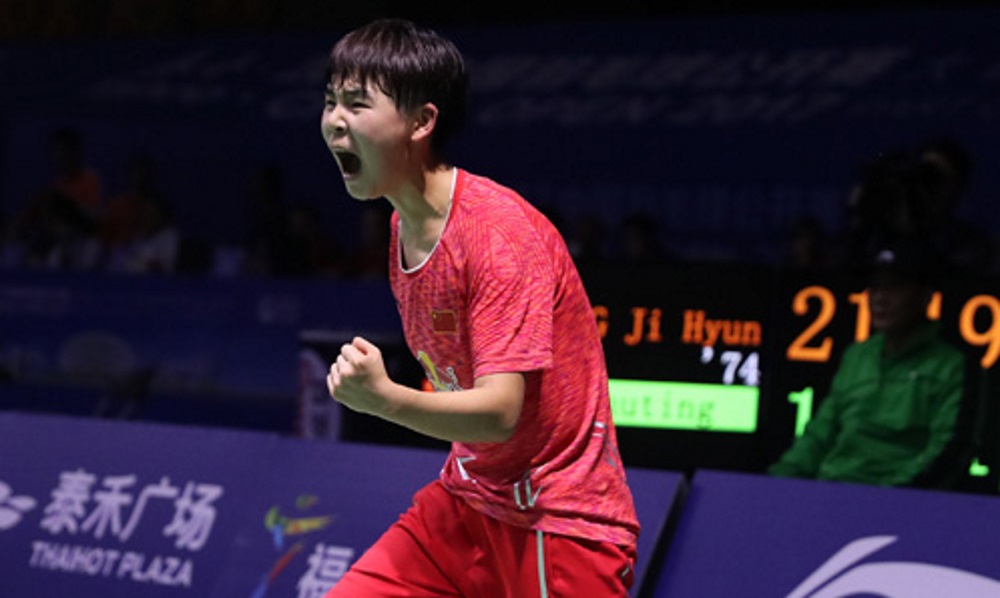 Young qualifier Ji Shuting made a big impact on her home turf at the TAHOE China Open 2017, beating Women’s Singles third seed Sung Ji Hyun in the second round yesterday.

The 19-year-old (featured image) stayed tough at the close of the second and third games, outplaying the veteran Korean 16-21 21-19 21-19 in a 76-minute encounter of their second round clash.

The hosts had much to feel happy about as two others joined her in the quarter-finals. Fellow-qualifier Gao Fangjie had a straightforward win over Korea’s Lee Jang Mi, but He Bingjiao was required to dig deep to hold off Canada’s Michelle Li. He Bingjiao trailed 1-7 in the third before getting her act together and claiming a 21-18 18-21 21-16 victory.

Ji Shuting will next take on the in-form Japanese Akane Yamaguchi, who maintained her dominance over India’s Saina Nehwal, beating her for the fourth straight time this year.

It was the relentless pace and steadiness of Yamaguchi that wore down Nehwal. The Indian had her moments, but Yamaguchi never let up in intensity during the 21-18 21-11 victory. “It was basically about fitness,” Nehwal said. “I was pushing hard in the first game, but there was a long rally at 17-all and I realised she wouldn’t give up. She didn’t even look tired. I haven’t had much rest since the French Open so I’m not at my best, and you need to be your best to beat her. She’s in great form this year. Akane, Tai Tzu Ying and Nozomi (Okuhara) are the ones in form… they’re very hard to beat because physically they’re in good condition.” Brice Leverdez has been something of a problem opponent for Lee Chong Wei in recent times; but recent history didn’t seem to weight Lee down today, as he calmly went about his business. The early points were patiently worked out, with Lee directing the traffic and getting Leverdez to chase the shuttle. The Malaysian’s precise smashes found their mark every time he had an opening.

Leverdez was outclassed and he admitted as much after the 21-6 21-9 whitewash.

“I know against him if I don’t play well I don’t have any chance, and today I didn’t play well,” Leverdez shrugged. “I’m never (overly) confident against any player going into the match. Every time it’s a new match. I’m 2-7 (career head-to-head) against him and I’m the underdog. It didn’t go at all my way. He played very solid and I made so many mistakes and I couldn’t get into the game.

“I couldn’t control the shuttle, but it’s not an excuse. He didn’t make any mistakes. He controlled the shuttle much better than me, and that’s why he’s still one of the best players in the world. He played a bit more at the net this time, he didn’t want to give me the chance to attack.” Hong Kong’s Lee Cheuk Yiu earned a quarter-final place with a surprise 21-19 21-17 verdict over India’s HS Prannoy, who fell victim to his inconsistency in the second game, even as Lee maintained his attacking rhythm throughout. The Hongkonger will face second seed Son Wan Ho (Korea) for a place in the last-four.

Women’s Doubles top seeds Misaki Matsutomo/Ayaka Takahashi had a slow start against Korea Open champions Huang Yaqiong/Yu Xiaohan (China) but caught up at the end of the first game and left them totally befuddled in the second as they stormed to a 21-19 21-6 result. Up next will be recent Macau Open champions Zheng Siwei/Huang Yaqiong (China), who beat compatriots He Jiting/Du Yue in straight games.