The former World No.2, who was out of international competition from April 2016 to June 2017, won his fifth title on the trot, following victories at the K&D Graphics International Series, the Yonex Belgian International, the Li-Ning Czech Open and the Yonex Dutch Open.

In the Men’s Singles final yesterday, Momota (featured image) enjoyed a comfortable win over Mustofa, 21-16 21-10. The unseeded Japanese had struggled earlier in the week, as he needed three games to win his first round (over Indonesia’s Krishna Adi Nugraha) and second round (over Hong Kong’s Lee Cheuk Yiu).

Cai, who will turn 18 on Wednesday, prevailed over Pai in an hour-long battle, 21-15 17-21 21-16. Cai avenged her semi-final loss at the BWF World Junior Championships to eventual champion Gregoria Mariska Tunjung (Indonesia) in the first round. In the other half, Pai beat two Chinese on her way to the final – Han Yue and Zhang Yiman. China had a three-gold haul with Huang Yaqiong starring in both her doubles finals. Huang teamed up with Zheng Siwei in Mixed Doubles and the fifth seeds needed just 32 minutes to take apart Korea’s Seo Seung Jae/Kim Ha Na, 21-14 21-11 in the shortest match of the day.

The Chinese had an impressive run, with victories over Denmark Open champions Tang Chun Man/Tse Ying Suet (Hong Kong) in the quarter-finals and Malaysia’s Chan Peng Soon/Cheah Yee See in the semi-finals. The unseeded Koreans had earlier upset Japan’s Mayu Matsumoto/Wakana Nagahara in the quarter-finals and compatriots Kim So Yeong/Kong Hee Yong in the semi-finals. The Koreans shot into the final after upsetting recent French Open champions Lee Jhe-Huei/Lee Yang (Chinese Taipei) 21-19 21-8, while in the other half, the Indonesians needed three games to get past Hong Kong’s Or Chin Chung/Tang Chun Man in the semi-finals. 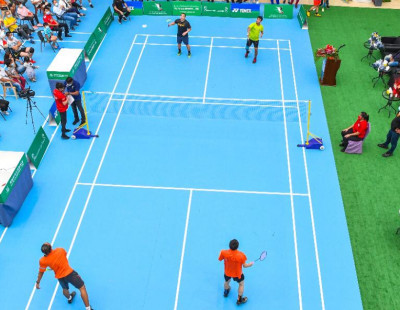