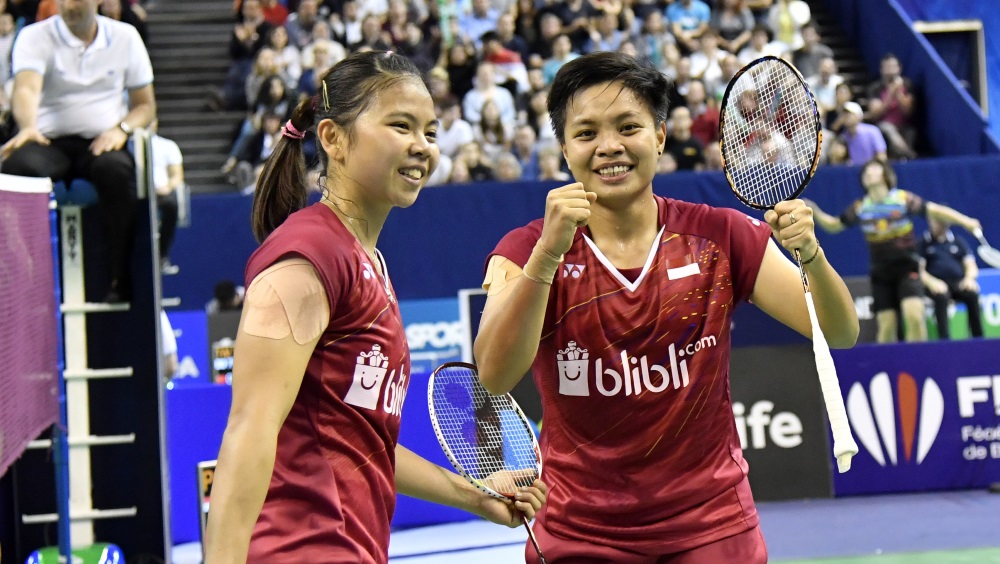 Greysia Polii and Apriyani Rahayu’s sensational triumph at the Yonex French Open has catapulted them 10 places into No.13 on the latest Destination Dubai Rankings.

The duo (featured image) has brought Indonesian Women’s Doubles back into the reckoning after injury to Nithya Krishinda Maheswari sidelined the Polii/Maheswari combination. With Rahayu maturing quickly and combining brilliantly with Polii, Indonesia have a strong shot at securing a place in this category at the Dubai World Superseries Finals. Japan though had a big takeaway from Paris – the promising show of young prospects Mayu Matsumoto and Wakana Nagahara, who had a stellar run into the semi-finals, beating their seniors Misaki Matsutomo and Ayaka Takahashi on the way. The semi-final placing saw Matsumoto/Nagahara rise 13 spots into No.32.

Japan have an overflowing treasure chest in Women’s Doubles, and the rise of Matsumoto and Nagahara is great news for them, especially with the Uber Cup coming up next year.

The top three spots in the Destination Dubai Rankings are expectedly held by Japan –Tanaka/Yonemoto, runners-up in Denmark; Matsutomo/Takahashi and Fukushima/Hirota, while their compatriots Naoko Fukuman/Kurumi Yonao are at No.6.

The interesting development in Denmark was the recombination of the top Korean pairs. Although Chang Ye Na/Lee So Hee have had a memorable run this year, winning the Yonex All England, steering Korea to the TOTAL BWF Sudirman Cup, and finishing runners-up at Superseries in Indonesia and Korea, the pair was split. Lee So Hee was paired with Shin Seung Chan and Chan’s regular partner Jung Kyung Eun with Chang Ye Na. The move paid dividends, as both new pairs performed creditably in Denmark, with Chang/Jung making the semi-finals, where ironically they fell to Lee/Shin, who went on to capture the title. Another new Korean combination, Chae Yoo Jung/Kim Hye Rin, beat top seeds Matsutomo/Takahashi to reach the quarter-finals.

Lee/Shin’s run in Denmark included wins over top Chinese pairs like Li Yinhui/Huang Dongping and Yu Xiaohan/Huang Yaqiong. However, Lee and Shin have been split for the two remaining Superseries, and paired up with Kim Hye Rin and Lee Yu Rim respectively.

The two Korean pairs in the top ten of the Destination Dubai Rankings – Chang Ye Na/Lee So Hee (No.4) and Jung Kyung Eun/Shin Seung Chan (No.8) – are expected to slip down the rankings as a result. The highest-ranked Chinese pair is No.7 Chen Qingchen/Jia Yifan, who haven’t had a particularly memorable post-World Championships season. The World champions were whipped 21-5 21-10 in the semi-finals of the French Open by Polii/Rahayu, and will look to regain their confidence on home turf at the China Open next week.