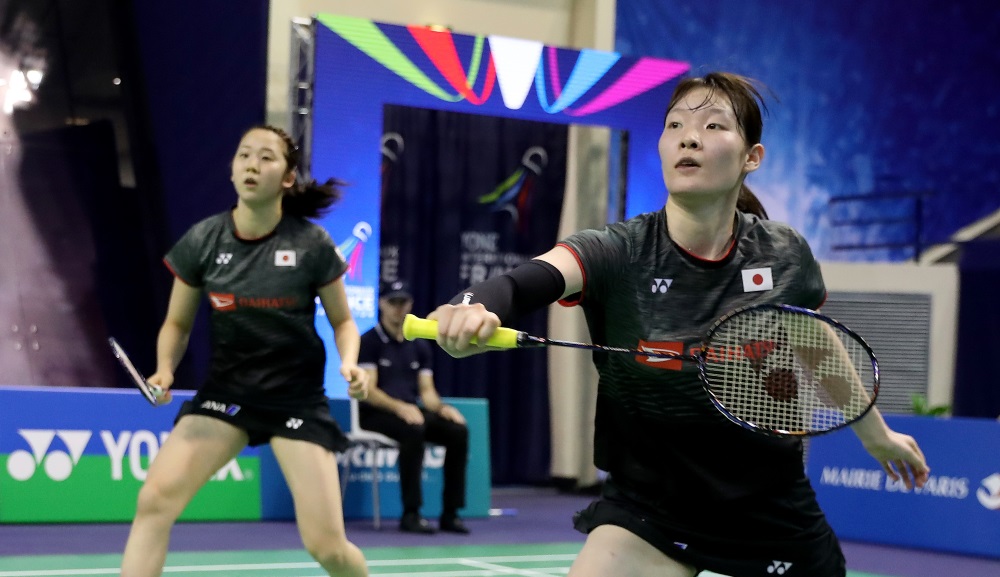 Yet another Japanese Women’s Doubles pair announced their arrival on the big stage with Mayu Matsumoto and Wakana Nagahara making the semi-finals of the Yonex French Open 2017 today.

Ironically, their feat was at the expense of Japan’s best pair, Misaki Matsutomo and Ayaka Takahashi. In 51 gruelling minutes, Olympic champions Matsutomo and Takahashi were given a taste of their own medicine as Nagahara and Matsumoto (featured image) held firm to take the match 21-18 21-17. After their upset of Denmark Open champions Tang Chun Man and Tse Ying Suet yesterday, Ben Lane and Jessica Pugh went in to the quarter-final against Zheng Siwei and Chen Qingchen full of beans. The England pair stayed with their feared opponents, not letting the loss of the opening game deter them, nor the fact that Zheng and Chen narrowed a 12-18 deficit to 19-all. A poke by Pugh saw the shuttle dribble over and gave them the second game, and they used that momentum to match the Chinese until 14-all.

It was just a couple of loose shots that turned the match from there. Zheng and Chen smelled blood and zeroed in on the kill – the score (21-18 19-21 21-16) an accurate reflection of how the England pair lost it at the very end. “We’re disappointed now, but overall we had a good tournament,” said Lane. “We had our moments, but they changed something after 14-all. They got the initiative at the start of every rally, it’s very hard to get back after that.”

“It didn’t go right for me,” said Intanon. “I just couldn’t control the shuttle. I tried to rally but it wasn’t working. I don’t know what happened with myself. It wasn’t my best performance. Of course I had less time to recover after Denmark, but if I have to play two tournaments in a row I have to be fit. I wasn’t tired today, though, so it’s hard to explain what went wrong.” The Indians, blown away in the opening game, settled down to display some clever badminton. Showing greater patience and anticipating correctly, the Indians had the Danes in a tangle with their touch at the forecourt. Shetty in particular was a sensation at the net, causing his opposite number all kinds of problems, while Rankireddy’s powerful smash did plenty of damage. At 17-all in the third the match was on a knife edge, but once again the Danes showed their mastery of such situations. Boe took charge, darting to the net to clinch the vital lead at 18-17 and the Danes built on that to take the match 21-5 17-21 21-17.