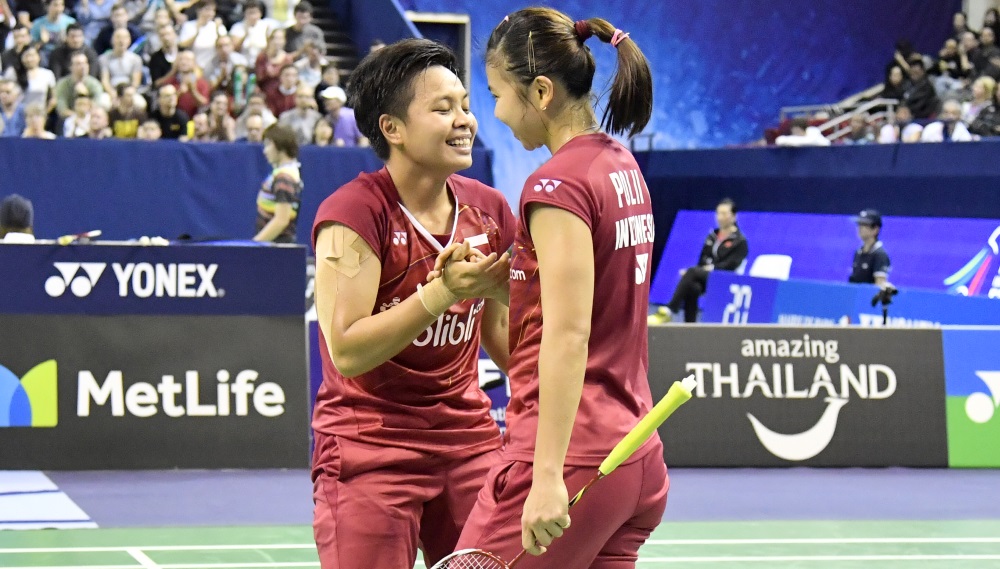 It turned out to be a magical afternoon for Polii and Rahayu as the new Women’s Doubles combination made the final with an impossibly one-sided result.

That the 21-5 21-10 decimation was of World champions Chen Qingchen and Jia Yifan made nearly everyone – including Polii and Apriyani – struggle to come to terms with what had just transpired.

“We had to struggle hard, had to keep it going. They are World champions. I guess today our strategy worked well. They couldn’t do anything. I don’t know what happened with them. It was our day today. I think they wanted to keep the shuttle deep; whatever our coach told us worked well for us. Apriyani is learning things quickly, she is absorbing things from everyone around her.” Faced with the bustling Polii and the jump-smashing, net-rushing presence of Rahayu, the Chinese got increasingly frustrated. Having been whipped for just five points in the opener, the Chinese attempted to shift to a defensive line, throwing the shuttle high and challenging the Indonesians’ offence.

It was a plan that backfired, for not only were Polii and Rahayu patient in the long rallies, they showed greater inventiveness and surprised the Chinese with their angles. Rahayu was a revelation at the net with her soft touch; and with the Indonesians barely making an error, the desperation began to tell for the World champions and error after error followed.

In the final tomorrow, the Indonesians face Korea’s Shin Seung Chan and Lee So Hee, whose form continued to hold, as they made the Women’s Doubles final after winning the DANISA Denmark Open last week.

The Koreans blew past Mayu Matsumoto and Wakana Nagahara in the opening game, but the emerging Japanese pair put up a hard fight in the second. With their defence better organised against the attacking Koreans, the Japanese enjoyed some bright spells, with Matsutomo in particular creating trouble at the other end with her heavy smashes. Nevertheless, the Koreans asserted themselves when it mattered, and came away winners at 21-12 21-14.

Zhang Nan and Liu Cheng fell in an hour-long battle to Lee/Lee, who entered their first Supereries final with a come-from-behind victory. The Taiwanese trailed all through the decider, but four straight points got them level at 16. A thrilling finale ensued with Lee/Lee edging ahead of the Chinese at 19-21 21-13 21-19. Defending champions Mathias Boe/Carsten Mogensen (Denmark) await them in the final.

“This is our career’s biggest moment as this is our first Superseries final,” said Lee Yang. “We did well to keep our composure against the World champions. It was a close match but we were able to keep our focus at the end.” Japan’s Akane Yamaguchi showed no sign that she had been involved in a marathon 79-minute thriller against Korea’s Sung Ji Hyun yesterday, for she was a vision of quicksilver feet and precision smashing against India’s Pusarla V Sindhu today.

The Japanese played close to perfection; she was in the right place on every smash, while her own offensive forays found the lines with unerring accuracy. The loopy slow drops forced Pusarla to lunge desperately, and the Indian, faced with an opponent who could do no wrong, fell into subdued silence. There were no fist pumps, no yells in delight, for there was an air of inevitability well before the match went Yamaguchi’s way 21-14 21-9.

“I gave her a big lead in the second; to cover that and come back was tough. I couldn’t play my game. Akane’s defence was very good. I’ve seen her videos, her defence in this tournament has been very good. She was picking all my smashes today. Maybe I shouldn’t have attacked so much. She didn’t make any mistakes today. Everything went right for her today.”

Top seed Tai Tzu Ying, meanwhile, endured some bumps in her road to the final. The Chinese Taipei star was mostly in great touch against China’s He Bingjiao, who stretched the contest to a third game. The Chinese however fell apart in the decider: 21-14 17-21 21-8.