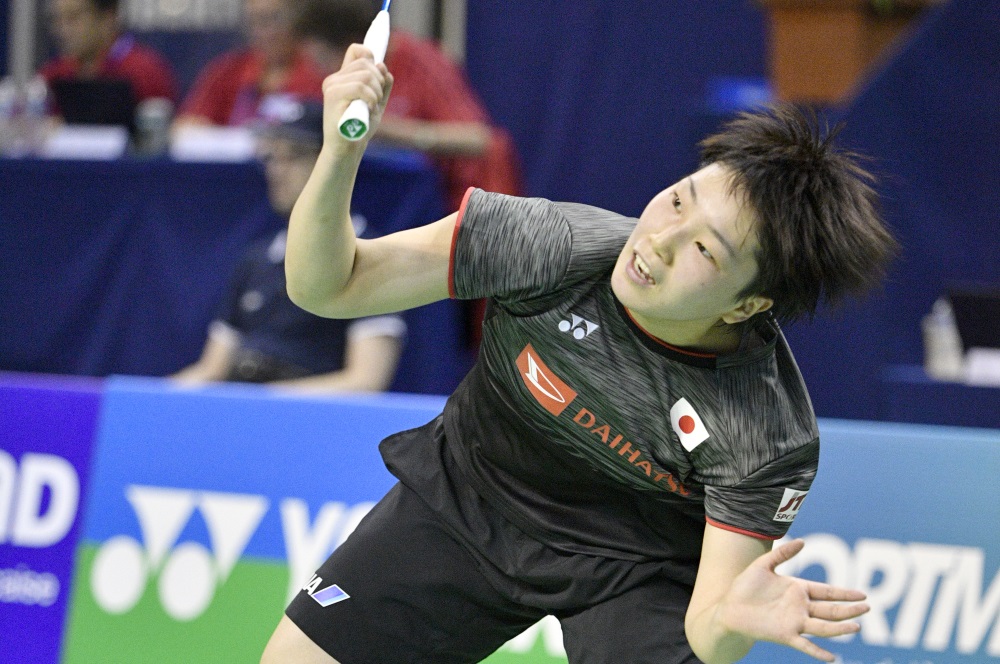 Akane Yamaguchi scripted a memorable comeback from a desperate situation to enter her sixth World Superseries semi-final this year, at the Yonex French Open 2017.

The fifth seed from Japan (featured image) trailed Korea’s Sung Ji Hyun all the way in the third but kept herself in the hunt, chipping away at the deficit. The Korean failed to capitalise on two match points and paid the price, going down 17-21 21-15 23-21.

In the other half, defending champion He Bingjiao (China) had her hands full against Korea’s Lee Jang Mi, but once she took the close first game, the Korean couldn’t sustain her resistance. He Bingjiao’s 25-23 21-10 victory gives her a semi-final date with top seed Tai Tzu Ying, while Yamaguchi takes on Pusarla V Sindhu in the other semi-final. The qualifier faces Denmark’s Anders Antonsen, who caught Hong Kong’s Ng Ka Long by surprise with his pace, as he recorded a 21-16 21-16 victory.

“I couldn’t catch his pace at the beginning of the match and I was under pressure all the time,” admitted Ng.

The young Dane is in his second Superseries semi-final after the Yonex-Sunrise India Open.

“It means so much. This is what I’ve been working for since I was six years old, running around in my father’s club. To play in front of a crowd like this, in a semi-final in a big event like this, is a dream come true. So I’m just really happy and it feels like I’ve achieved a goal today,” said Antonsen.

“After playing an hour and 20 minutes against Chen Long I could feel it a bit in my legs, but once the adrenaline gets going and with the crowd cheering for you, you have a bit more left in the gas tank than you’d expect.”

The other semi-final will be an all-Indian affair between Kidambi Srikanth and HS Prannoy. Kidambi recovered from a first game mauling to overcome China’s Shi Yuqi 8-21 21-19 21-19; Prannoy was in cruise mode from start to finish against Korea’s Jeon Hyeok Jin, 21-16 21-16. Antonsen’s compatriots in Mixed Doubles and new pair Mathias Christiansen and Christinna Pedersen will also feature in the semi-finals today. The Danes kept going despite trailing throughout the third against Thailand’s Dechapol Puavaranukroh/Puttita Supajirakul, eventually turning the tide from 17-19 to win 13-21 21-13 21-19.

“Personally, playing with Mathias has given me a boost,” said Pedersen. “While training back home I like to figure out how to make this new partnership work, it’s been really inspiring. That’s the reason we were fighting back today, because we were under pressure after the first game, and it would’ve been easy to say it’s not happening today, as we’ve only been playing for two tournaments, but we really wanted this so we tried everything possible to fight back and luckily for us we won today. “I told Mathias before we came here, just wait and see what Paris is to play badminton because they really love badminton and I’m thankful for their support for many years.”

Indonesia can also look ahead to the Women’s Doubles, as Greysia Polii and Apriyani Rahayu clinched their last-four spot beating No.7 seeds Shiho Tanaka/Koharu Yonemoto (Japan) 19-21 21-13 21-19. Up next are the World champions – Chen Qingchen/Jia Yifan of China.