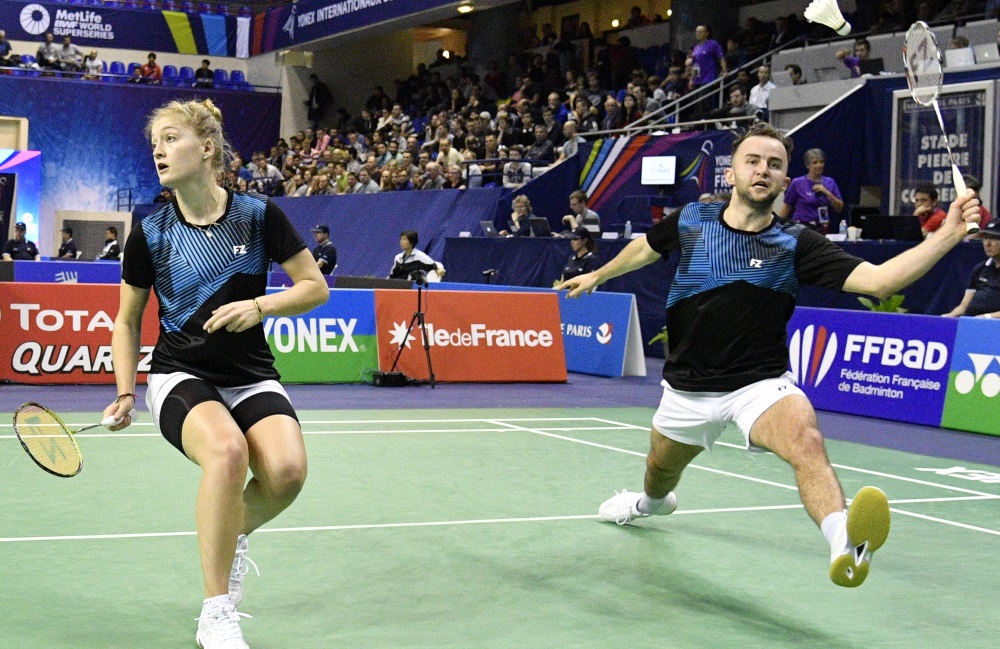 The two 20-year-olds from England made their first World Superseries Mixed Doubles quarter-final beating the left-handed duo from Hong Kong, 13-21 21-14 21-16, at the Yonex French Open 2017 today.

The match was evenly balanced at 13-all in the decider, at which point the England duo stepped up a gear. It was Lane’s tireless work from the back that gave them the crucial 19-14 lead; a smash down the middle giving them six match points. The first opportunity was converted when the Denmark Open champions sent a return long.

“We started off really slow,” said Lane. “We played them last week, and that gave us confidence as we took a game off them, and we thought we can definitely beat them this week. We’re into our first quarter-final which is really nice. It’s amazing for me and Jess, we’re 20 years old; the fact that we can do it is really nice for both of us.”

“It’s amazing, really really happy, I can’t explain it,” said Pugh. “We didn’t expect it… wow. We knew we could challenge them. I think this was a different match (from Denmark), a different venue; we could open out a bit more. We wanted revenge and obviously they beat us last time so we wanted to go on and give them a fight.

“Playing two left-handers… we don’t come across that at all, really. I think it just makes a big difference, because we have to make sure we don’t play too straight, so it opens a new dimension of skill; that was a tactic we managed to do well. We did some video, checking where we went wrong in the last match… and it all panned out well.”

In the same half, new Danish combination Mathias Christiansen and Christinna Pedersen pulled off a narrow 21-18 21-19 result over No.7 seeds Seo Seung Jae/Kim Ha Na (Korea).

In Women’s Singles, Japan’s Akane Yamaguchi held off a battling Saina Nehwal to repeat her Denmark Open result over the Indian. The Japanese was all over Nehwal from the start; her speed and placement giving the Indian little leeway. Down 6-11 in the second, Nehwal staged a great fightback. Despite being left breathless after some rallies, Nehwal dug in with characteristic stubbornness, eventually catching up at 19.

Nehwal let out a yell with Yamaguchi sending a clear long and giving her game point, but the Japanese too refused to yield and converted her own second match point for a 21-9 23-21 result.

Nehwal’s compatriot Pusarla V Sindhu though had no trouble against another Japanese, Sayaka Takahashi, as she cruised home 21-14 21-13. Up next for the Indian will be the Chinese who beat her last week in Denmark, Chen Yufei.

The emerging Chinese gave a glimpse of their prowess as they destroyed World Championships runners-up Mohammad Ahsan/Rian Agung Saputro in a 28-minute blitzkrieg. Nothing that the Indonesians did could make an impression on the rampant Chinese, who came away victorious 21-13 21-16.

Indonesia though had some good news in the category, as Fajar Alfian and Muhammad Rian Ardianto held their nerve in a tight final game, saving two match points to beat Korea’s Chung Eui Seok/Kim Dukyoung 21-12 13-21 25-23.