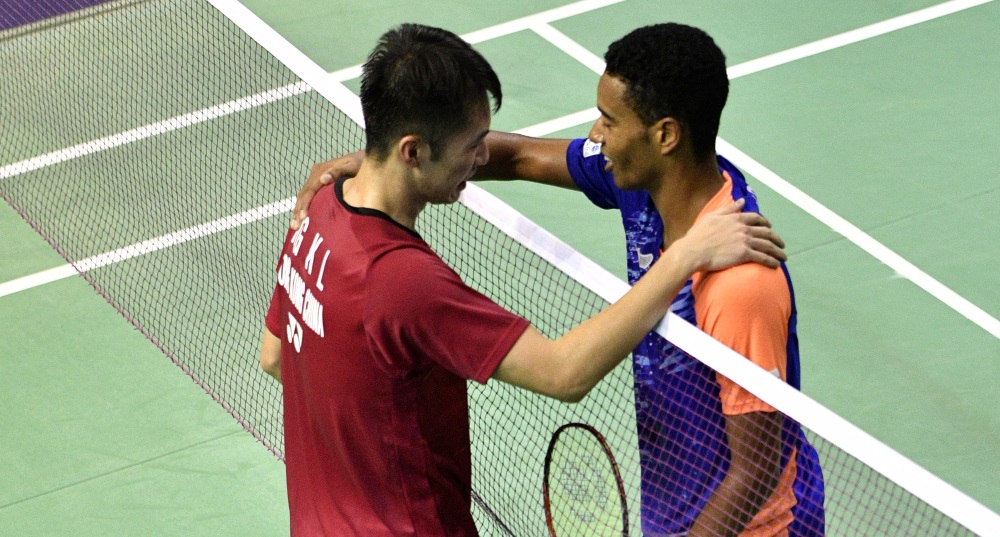 Ygor Coelho de Oliveira came within one point of creating another milestone for his country, at the Yonex French Open 2017 last evening.

Oliveira, who became the first Brazilian to play in the main draw of a Superseries at the Victor Korea Open in September, nearly had his first top-ten victim as he had three match points against Hong Kong’s Ng Ka Long.

Despite losing the second game the Brazilian kept up his tempo in the decider, his attacking game punching holes in Ng’s defence. He won three match points for 20-17 when he dived full-length to keep the rally going, before closing out with a smash.

Nevertheless, Oliveira came out smiling broadly, in wonderment that he had nearly taken down a top-ten player.

“I’ve trained with him in Denmark in 2014 so I knew his game. It was so close. I didn’t believe – I just didn’t believe I could beat him. He showed me a high level. He showed why he’s top-ten,” said the Brazilian.

“I didn’t have patience, I wanted to finish the point and he was waiting for me. I have to be ready next time.”

Oliveira has been training in France with the national team for five months now and credited coach Peter Gade with his development: “The coach is really focussed. He showed what you have to do once you’re in trouble. He keeps pushing us to get to a higher level.”

Ng himself was all praise for the player he beat: “I know about his story and I have the highest respect for him.”

There were other close Men’s Singles matches in the evening session. Hong Kong’s Hu Yun stayed focussed despite the thunderous home support for qualifier Lucas Corvee, and edged past the Frenchman 21-17 20-22 21-19. Another Hongkonger, Wong Wing Ki, stopped Indonesia’s Jonatan Christie 14-21 21-13 21-16. “The first game in a tournament is always tough and it’s hard to adjust,” said Nehwal. “It was hard to control. That good feeling wasn’t there.” Nehwal was all praise for the venue: “It’s a very good hall. There were so many people in the galleries, I haven’t seen so many here in earlier years. This is one of the best venues in the world, that’s why all of us like to play here. I would say it’s definitely improved since 2012 when I played the final. It wasn’t as crowded back then – and this is just the first round.”

Nehwal will face the player she lost to last week in Denmark – Akane Yamaguchi. The Japanese broke the hearts of the home crowd beating Delphine Lansac 21-15 21-18. Others to progress were Nehwal’s compatriot Pusarla V Sindhu and Japan’s Sayaka Takahashi.

Compatriots Yuki Fukushima/Sayaka Hirota also made the second round, where they face the pair that beat them in Korea: Indonesia’s Greysia Polii/Apriyani Rahayu.