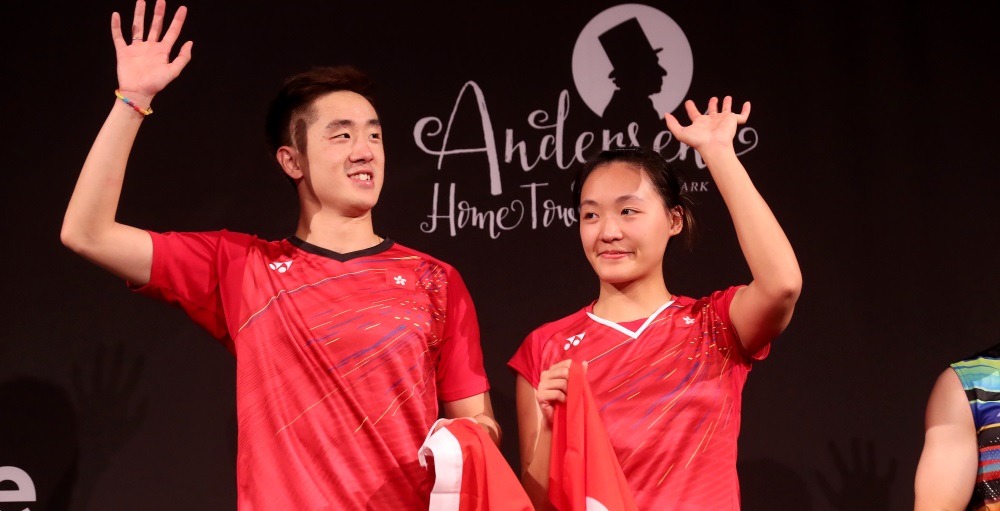 Tang Chun Man and Tse Ying Suet pulled off a sensational victory from the jaws of defeat for their first World Superseries title, at the DANISA Denmark Open 2017 today.

It was a day of firsts in the three doubles categories, with Korea’s Shin Seung Chan/Lee So Hee and China’s Zhang Nan/Liu Cheng also winning their first Superseries title as a pair. The Hongkongers (featured image) hung in through the crests and troughs of an hour-long final, and capped a fairy tale win by saving five match points to take the title 24-22 19-21 23-21. It was Hong Kong’s first Superseries title in Mixed Doubles since the Australian Open of 2015.

Playing their first Superseries final as a pair, Tang and Tse refused to be intimidated by the top seeds; with their lefty flicks and drives causing their opponents much trouble, the Hongkongers were able to offset the bludgeoning attack of Zheng and Chen.

Tse had a fabulous match, keeping Hong Kong in the hunt despite Tang going off the boil at the death. At the other end, Zheng and Chen made an unusual number of errors; still, with China leading 20-15 in the third there was little to suggest they would be denied. But with every point lost the Chinese started to look jittery; and while Tse stayed rock-steady, Zheng was all over the place, with a return error giving Hong Kong match point, and they made no mistake.

“We’re quite emotional right now, we didn’t expect this at all,” said Tse. “Our coach made a big difference – he kept us calm before the final, and he gave us many useful tips during the match. When we were down match points, we told each other to stay aggressive, and maybe they would get nervous.”

In Women’s Doubles, Shin Seung Chan and Lee So Hee struck gold in their latest foray together, as the Koreans won their first World Superseries title as a pair beating Japan’s Shiho Tanaka and Koharu Yonemoto 21-13 21-16.

Shin, winner of the Denmark Open 2015 with Jung Kyung Eun, and Lee, winner of the All England this year with Chang Ye Na, have combined in the past but never with success at the Superseries. In fact, at their last Superseries outing in Japan last year, the Koreans lost to Tanaka and Yonemoto in straight games in the opening round.

Today the picture was different, for the Korean firepower was too fierce for the Japanese to handle. Tanaka and Yonemoto needed to get their defensive rhythm going, which they did, but all too briefly in the early phase of the second game after they’d been blown to bits in the opener. Service mistakes by both Tanaka and Yonemoto hampered their rhythm, and Korea tightened their grip on the proceedings, completing the victory 21-13 21-16 in 44 minutes.

“We are happy to win our first Superseries together,” said Shin. “The team has been testing new combinations; we are both aggressive and it worked well for us today.”

While the Indonesians played for the close net game, depending on Sukamuljo’s great skills at the forecourt, the Chinese had the upper hand in the open rallies. Sukamuljo and Gideon struggled to find ways to break the Chinese, with Zhang and Liu being comfortable in the flat game and under little threat from the smashes of the Indonesians.

Having saved two match points in the second, the Indonesians got off to a flying start in the decider. But some indecisive play by them, coupled with Zhang and Liu’s steadiness, saw the Chinese overtake them with six straight points for a 15-12 lead, from where they never looked back. Appropriately, it was Zhang who spotted the opening on their fourth match point.

“We were prepared for their tricks as we’ve lost twice to them,” said Zhang Nan. “This is our first Superseries victory; there’s a lot we have to do. I think we can keep getting better.”