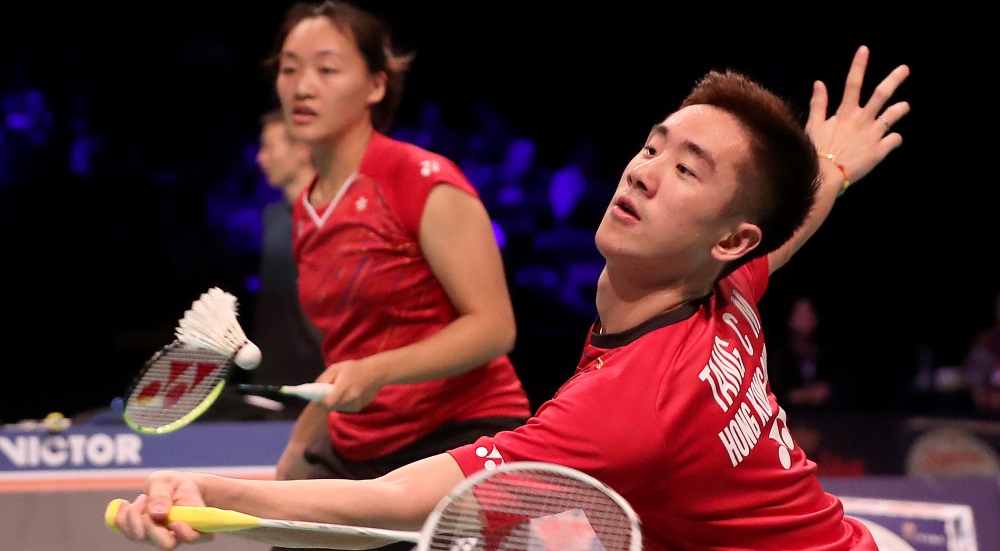 The left-handed Mixed Doubles pair (featured image) were all over the Indonesians from midway in the opening game and cantered to a 21-16 21-18 victory in just 33 minutes. Tang and Tse have their task cut out for tomorrow as they take on Australian Open champions Zheng Siwei/Chen Qingchen (China), who beat Malaysia’s Goh Soon Huat/Shevon Jemie Lai in straight games.

“The Indonesians are strong opponents and we are happy to have beaten them,” said Tse Ying Suet. “They are extremely good at the net, so we tried to relax and not feel the pressure. I’m really excited to be in the final. Zheng Siwei and Chen Qingchen are very fast and we have to be prepared for that.”

Despite the loss of Ahmad and Natsir, Indonesia can look forward to their Men’s Doubles spearheads challenging the World champions.

Gideon and Sukamuljo, winners of four Superseries this season, have lost just one game to Pratama and Karandasuwardi in four previous matches, and they weren’t close to losing one today. From 14-all they surged ahead, taking the opening game at 18; the second was a no-contest as the points came at will, helping them complete the rout in 34 minutes. The final will see them head in as the top contenders, as they have beaten Zhang Nan and Liu Cheng twice this season. However, the Chinese will go in with the confidence of having beaten home favourites Mathias Boe and Carsten Mogensen.

The Danes had an uncharacteristic meltdown in the third after working hard to take the second. The Chinese shot ahead 6-1 and from there it was an uphill battle for the Danes. Both Boe, who had a brilliant quarter-final with his sharp net interceptions, and Mogensen, fumbled on routine shots in the decider and the Chinese accepted their offerings gleefully. The 21-18 18-21 21-13 result will see Zhang and Liu in their first Superseries final as a pair.

“We enjoyed playing the home pair today as they were the favourites,” said Zhang Nan. “We had to be extremely alert on the service situations, and I believe that made the difference. We still have a lot of room to improve. Winning the World Championships was just the beginning.” The Women’s Doubles will be a Korea versus Japan affair, with Shin Seung Chan and Lee So Hee (Korea) taking on Shiho Tanaka/Koharu Yonemoto.