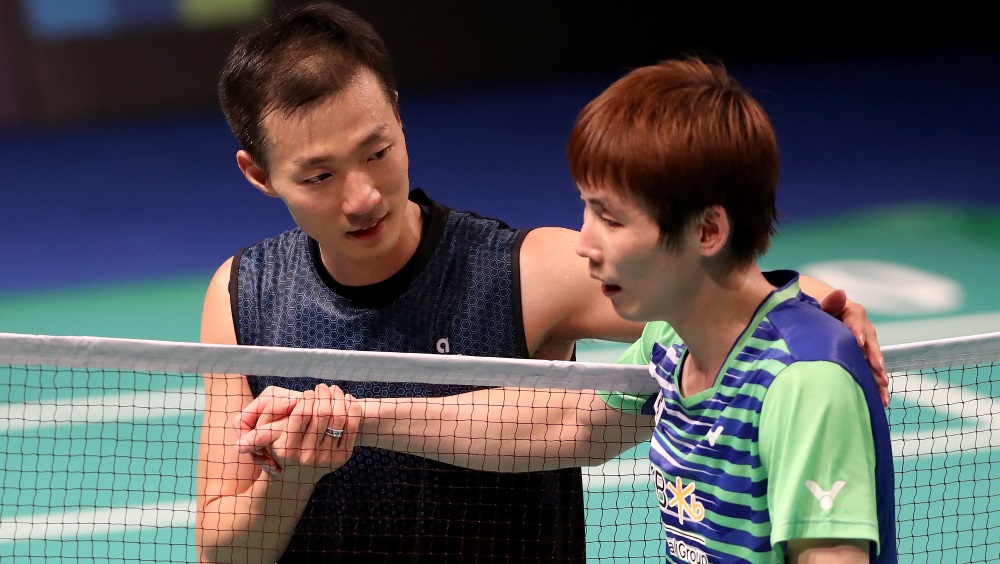 Lee Hyun Il handed younger compatriot Son Wan Ho a lesson or two in craft as the plucky veteran made the Men’s Singles final of the DANISA Denmark Open 2017 today. With his 25-23 18-21 21-17 victory in the semi-finals today, Lee snapped a sequence of four straight losses to Son, experiencing his first win since 2011 over the man eight years his junior.

Lee (featured image, left) has held his own in a circuit with far younger players, but had never troubled Son during their four meetings since September 2016. Today, the veteran said, he was better prepared, and never let his iron control over the shuttle dip, even uncharacteristically showing signs of frustration when a couple of line calls went against him. Lee fell back on his trusty control and precise game to keep Son on his toes.

Having spent 206 minutes on court before the semi-final, and with given the long rallies to which he was subjected, it was the younger man who flagged under the effort, and he needed medical attention in the third. Lee ran away with seven of the last eight points to seal his spot in the final, where he will take on Kidambi Srikanth.

The Indian reached his fourth World Superseries final this year with a clinical 21-18 21-17 result over Hong Kong’s Wong Wing Ki.

It was a different Intanon who appeared on court. The Thai in recent times has not been her best physically, especially in long matches, but today she was all fire and stubbornness; she came out guns blazing and refused to take her finger off the trigger through the crests and troughs of the match.

The aggression and positive intent had their reward as Tai fell into a subdued mode. Unusually, it was Tai who was forced to chase the shuttle through most of the first two games. Intanon’s control at the net was immaculate – she won the first game making the shuttle sit on the net cord, and even though Tai fought her way back to take the second, it had cost her far too much and she fell way behind in the decider. With leads of 9-2 and 14-6 Intanon had effectively shut the door on her, and it was a mightily pleased Thai that emerged from the cauldron: 21-14 20-22 21-14. “She’s been playing well. Earlier, I would have been scared for my fitness, but today after the second game, I felt I have to relax and try to keep my power. It worked. I’m excited about the final – it’s my second Superseries final of the year.

“I’m more confident about my fitness now. Before I came here, I trained really hard and every session was hard, but I could take it. My body was tired but I could work harder and harder and not get injured. That gave me more speed and confidence in the rallies.

“I don’t think about my losses to her (Tai). I think only about the moment. I lost to Akane in Korea; but I will try to do my best tomorrow. Last year our King passed away and I think I have to honour his memory.”