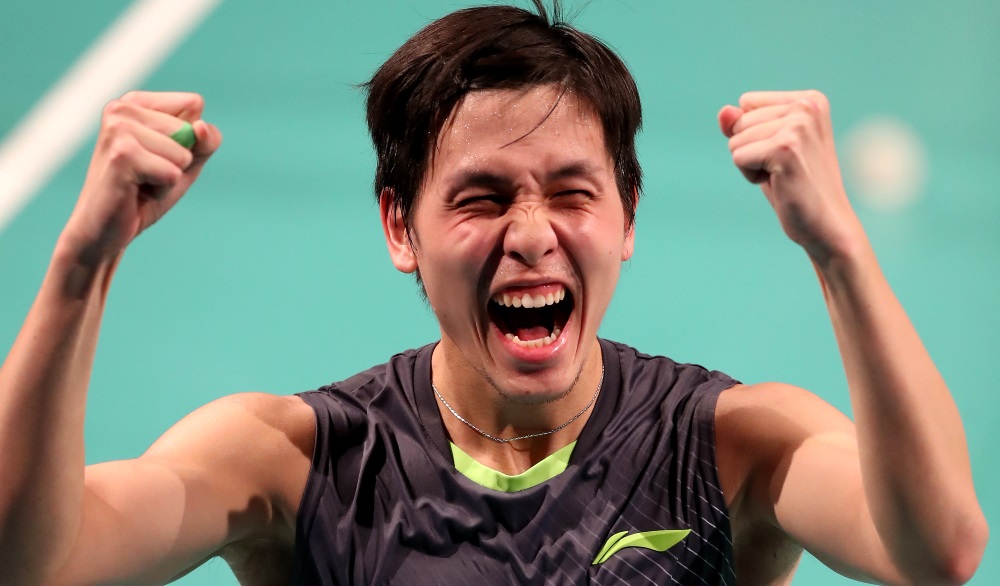 Viktor Axelsen’s hopes of a first World Superseries win at home unravelled today in an anti-climax against India’s Kidambi Srikanth at the DANISA Denmark Open 2017.

The Odense-born lad, playing in front of a packed venue, and possibly feeling the physical effects of a late finish on Thursday, crumbled in a heap in the third game of the Men’s Singles quarter-final against Kidambi, 14-21 22-20 21-7.  In the last-four, Kidambi takes on Hong Kong’s Wong Wing Ki (featured image), who edged out Chinese Taipei’s Chou Tien Chen in a thriller, 22-20 24-22, to ensure his place in a rare Superseries semi-final. The Axelsen-Kidambi encounter was the most anticipated of the day as it pitted the local star against one of his toughest rivals, who has won two Superseries this season. The first two games between the evenly-matched rivals were closely fought, but there were several unforced errors from either side as both players struggled to control the shuttle. Still, it was Axelsen who imposed his big physical game on the proceedings; the Dane had victory in sight at 19-17 in the second, but didn’t shut the door on his rival and Kidambi forced his way back in.

The third game was a mess for the Dane as he could barely keep the shuttle in play. Error after error mounted and the misery was complete in the 55th minute. Kidambi’s win salvaged the day for India following the losses of HS Prannoy and Saina Nehwal.

Prannoy, who had looked sharp in his defeat of Malaysia’s Lee Chong Wei yesterday, ran into the steady rallying game of Korea’s Son Wan Ho and couldn’t quite find his way. The Korean, despite playing two 80-minute matches, showed no ill-effects and moved smoothly to parry the attacking Prannoy’s best shots. The Indian was unable to break the rhythm and went down 21-13 21-18. The top half of the draw will be an all-Korean semi-final as he takes on Lee Hyun Il.

In Women’s Doubles, Victor Korea Open champions Huang Yaqiong/Yu Xiaohan were blitzed by new Korean combination Shin Seung Chan and Lee So Hee, 21-17 21-10. Endowed with a fierce attacking game, both Koreans were relentless in pouring on the pressure on the Chinese, who cracked in 41 minutes.

Their reward is a semi-final against compatriots Jung Kyung Eun/Chang Ye Na. The other semi-final will be an all-Japanese one: Naoko Fukuman/Kurumi Yonao versus Shiho Tanaka/Koharu Yonemoto, who beat Indonesia’s Della Destiara Haris/Rizki Amelia Pradipta 17-21 21-15 21-12. In Men’s Doubles, top seeds Mathias Boe and Carsten Mogensen took one step closer to winning a title they have won only once before. The Danes weren’t expected to be troubled by compatriots Niclas Nohr/Kasper Antonsen and they weren’t; 39 minutes were all it took them to book a semi-final place, 21-16 21-17. Boe and Mogensen will be the only local players in action in the semi-finals.

Up next for them are World champions Liu Cheng/Zhang Nan, who needed even less time to break the resistance of Japan’s Takeshi Kamura/Keigo Sonoda. The other semi-final will be an all-Indonesian one, between Marcus Fernaldi Gideon/Kevin Sanjaya Sukamuljo and Angga Pratama/Ricky Karandasuwardi.