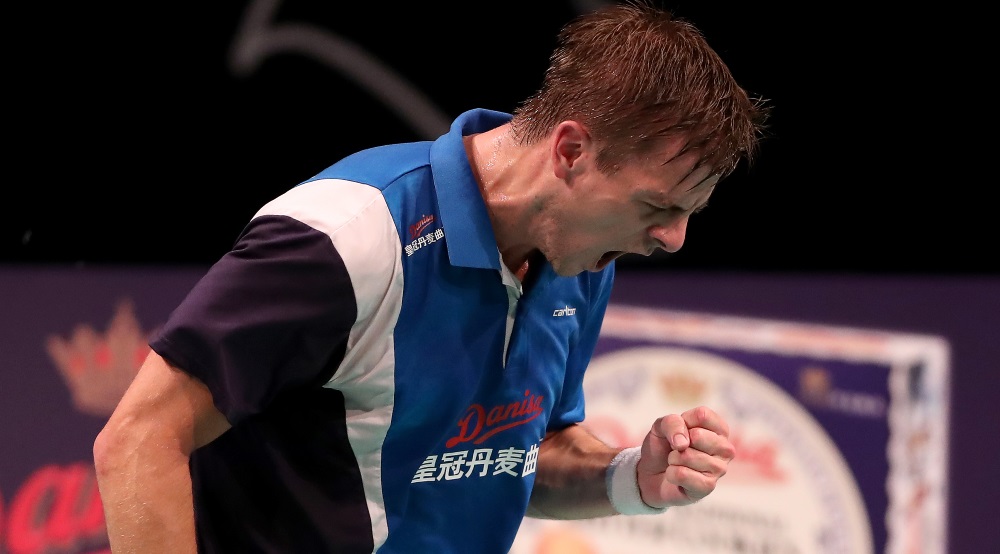 as he pulverised India’s Sai Praneeth in the opening Men’s Singles round of the DANISA Denmark Open today.

The Dane gave the Indian – winner of the OUE Singapore Open this year – nothing to work with, as he was razor-sharp in attack and countered whatever Praneeth threw his way. Vittinghus came away mighty pleased with his quicker-than-expected win over the crafty Indian.

“I played a lot better than expected,” said Vittinghus. “I know if I play my highest level, it’s difficult for a lot of players against me. I know from playing Praneeth at the All England two years ago during my good period, he was struggling with creating the points. I wasn’t expecting to play as well as this in the first round. Of course I’m surprised to win 10 and 15, I think it’s more due to my level being high.”

Vittinghus (featured image) revealed that he had changed his preparation for the Denmark Open this time by playing in last week’s Dutch Open, where he made the quarter-finals.

“I changed my preparation this time for Denmark. I played the Dutch Open instead of training back home and it was a good idea because it made me stop focussing on the Denmark Open so much. I had my focus all week in Holland and I had to come here in a hurry, so I didn’t have time to get caught up in expectations. Judged on this performance, it was a good change.”

Vittinghus takes on Chinese Taipei’s Chou Tien Chen, who extended his career record over China’s Tian Houwei to 4-0 with a 22-20 21-14 result.

Other winners in the top half included England’s Rajiv Ouseph and Indonesia’s Jonatan Christie. Ouseph held the lead through the first game; Shi nearly caught up but Ouseph fended off a body smash to convert game point. The Chinese fell apart in the second game.

“It’s always good to start with a win against a player of his level. He’s a very steady player; I’m sure he will be better in future,” said Ouseph. “This is my first tournament since the World Championships – I took a break to go on my honeymoon – so I’m happy I did so well.” Men’s Doubles second seeds Marcus Fernaldi Gideon and Kevin Sanjaya Sukamuljo had an up-and-down performance against Japan’s Takuro Hoki/Yugo Kobayashi. The Indonesians played a rickety second game but got their act together in the third to shut out the Japanese, 21-16 19-21 21-10.

Nohr won both his matches on the day, as he earlier combined with Sara Thygesen to beat India’s Satwiksairaj Rankireddy/Ashwini Ponnappa in the opening round of Mixed Doubles, 21-19 21-17.

Japan’s Takuro Hoki/Sayaka Hirota were also in command, as they needed just 33 minutes to get past Germany’s Mark Lamsfuss/Isabel Herttrich, 21-18 21-18.