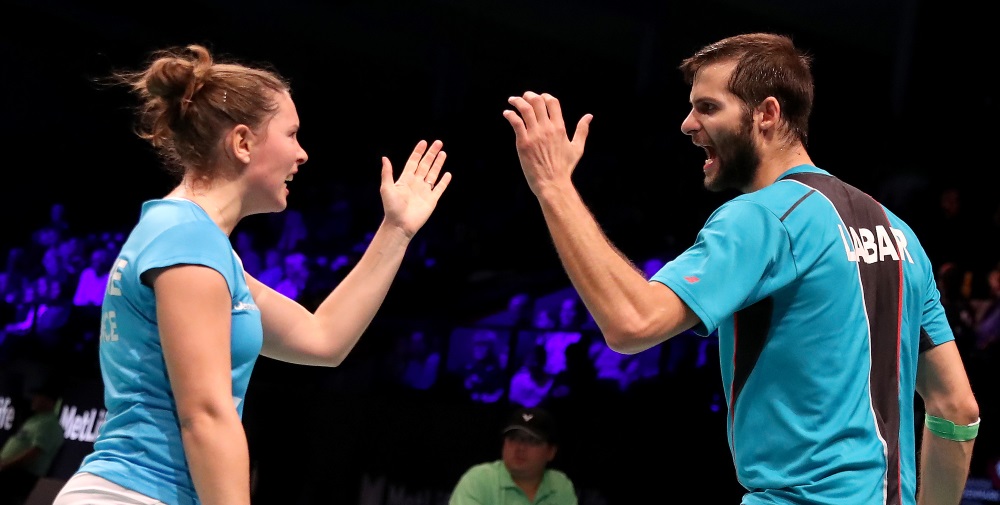 China suffered a double blow in Mixed Doubles this morning at the DANISA Denmark Open 2017 with two seeds crashing out in the second round. A third pair – No.5 seeds Zhang Nan/Li Yinhui – nearly joined their compatriots on the sidelines, but scrambled through to the quarter-finals after trailing for most of the third game against Japan’s Takuro Hoki/Sayaka Hirota.

Labar was shaking well after completing a thrilling 21-19 30-29 win that saw them through to their first World Superseries quarter-finals. The French duo (featured image) had come into the Denmark Open on the back of a mostly average season, and weren’t expected to trouble the second seeds, winners of three World Superseries this year. Yet, far from being intimidated, Labar and Fontaine matched the Chinese shot for shot; once they took the opening game, they had their tails up.

With an 18-15 lead they had a glimpse of daylight, but the Chinese levelled and from there it was a neck-and-neck battle, with the French saving three game points and the Chinese seven. To their credit, Labar and Fontaine didn’t let frustration get to them, and they converted their eighth opportunity.

“It’s quite amazing to win 30-29 against these kind of players who’re used to these situations,” said Labar. “Honestly, at some points in the third game, I was like, if we don’t win this one, we’re going to regret it so bad. But when you’re ready to serve you have to get back to badminton mode. We were quite clear about what receiving we were doing, and almost every time it was the same, and focussing on tactics helped us stay in the moment and not think too much. This is the best win for me. It’s the first time I’ve beaten someone in the top ten. more relaxed that it was the girl and not the boy. We decided not to go for an amazing serve, but just the good serve, and we were clear about which option we were taking, and the shuttle came as we expected.”

It was a good session for the underdogs, with the Netherlands’ Robin Tabeling/Cheryl Seinen nearly ambushing Seo Seung Jae/Kim Ha Na before the Koreans made it home in three tight games.

“He came out very quick and I didn’t adjust very well, but once I got my game plan sorted it made the difference,” said Ouseph. “He’s a quick player, he’s quite young and he’s got his attack and I had to stop him, really. This generation, they’re the same sort of level. Indonesia has three or four guys like that, then there are the Indian guys as well; you need to be at your top form to be playing them. They’re willing to give 100 percent physically.”