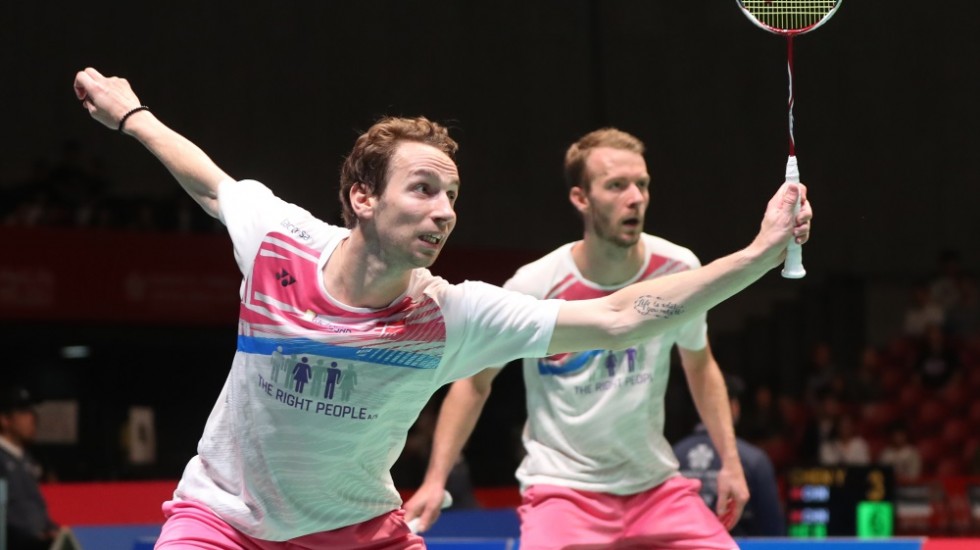 Their battles were as much about particular styles of play and approaches to the game, as they were a Indonesia’s Marcus Fernaldi Gideon/Kevin Sanjaya Sukamuljo – ‘Minions’ to their fans – and Denmark’s Mathias Boe/Carsten Mogensen couldn’t be more different. The Indonesians, dwarfed by the lanky Danes, specialise in nicks and cuts and play with a buzzing energy at the net, in contrast to the more classic, all-round style employed by Boe and Mogensen.

The fledgling rivalry between the two have produced six engrossing matches, of which the last two were on successive weeks in Korea and Japan. In testing conditions in Seoul, with the drift being a factor, the Danes showed masterly control in overcoming Fernaldi and Sukamuljo 21-19 19-21 21-15 for their second Superseries title of the year.

A week later, in Japan, it was the Indonesians’ turn to come up trumps against the Danes in the semi-finals, with the most one-sided score in their six matches, 21-15 21-14. Fernaldi and Sukamuljo would go on to win the final – against Japan’s surprise finalists Takuto Inoue/Yuki Kaneko – for their fourth Superseries crown this year, which marked them out as the standout Men’s Doubles pair this season. The revenge victory over Boe and Mogensen also set the stage for the homestretch of the Superseries season between two of the best pairs on the circuit currently.

What makes this rivalry stand out is the reliance on tactics of both pairs. Matches between the two are high on skill and craft – as the Indonesians, making up in quickness what they lack in penetration, square up against the clever Danes, who are adept at finding their way past sticky situations. With their fourth Superseries title, Fernaldi and Sukamuljo stretched their lead atop the Destination Dubai Rankings to 57,280 points, while Boe/Mogensen gained three places after the Victor Korea Open to place fourth.

Japan have been in the thick of things in all categories, and Men’s Doubles is no exception. Apart from Takeshi Kamura/Keigo Sonoda (No.2), the big gainers are Takuro Hoki/Yugo Kobayashi and Takuto Inoue/Yuki Kaneko. World champions Liu Cheng/Zhang Nan have had modest success since their triumph in Glasgow – reaching the last eight in Korea and falling in the second round in Japan, but remained in the top five. Compatriots Li Junhui/Liu Yuchen haven’t played since the World Championships and dropped a spot to No.3.

With few pairs staying consistent, there is plenty of fluidity among the top ten spots. The race to Dubai is still open, and the scene after the Yonex-Sunrise Hong Kong Open – the final stop in the 12-leg MetLife World Superseries circuit – might well be quite different from what it is now.