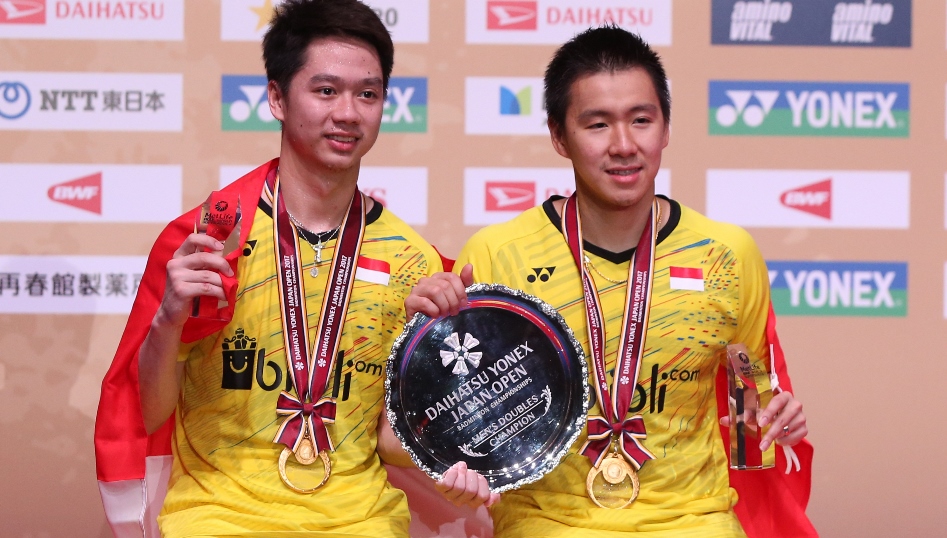 Marcus Fernaldi Gideon and Kevin Sanjaya Sukamuljo reaffirmed their status as ‘the ones to beat’ in Men’s Doubles, today coasting to their fourth title of the MetLife BWF World Superseries season.

Having not tasted success since blazing to a Superseries hat-trick in early April, the Indonesians (featured image) made relatively light work of hometown hopefuls, Takuto Inoue and Yuki Kaneko – 21-12 21-15 in 30 minutes.

Nicknamed ‘the Minions’ by their fans, the livewire duo showcased their trademark speed, agility and astounding shots, bringing their opponents sharply back to reality after Japan’s euphoria of having Men’s Doubles finalists in their home tournament for the first time ever. Inoue and Kaneko looked at sea versus the pace and creativity coming from across the net and any fanciful ambitions they may have had of ascending the podium’s top step were soon snuffed out by the confident and exacting plays by the pair who will return to the world No.1 ranking in a few days.

“We were expecting our match would be much closer,” said Gideon, “but it seems they were nervous.” 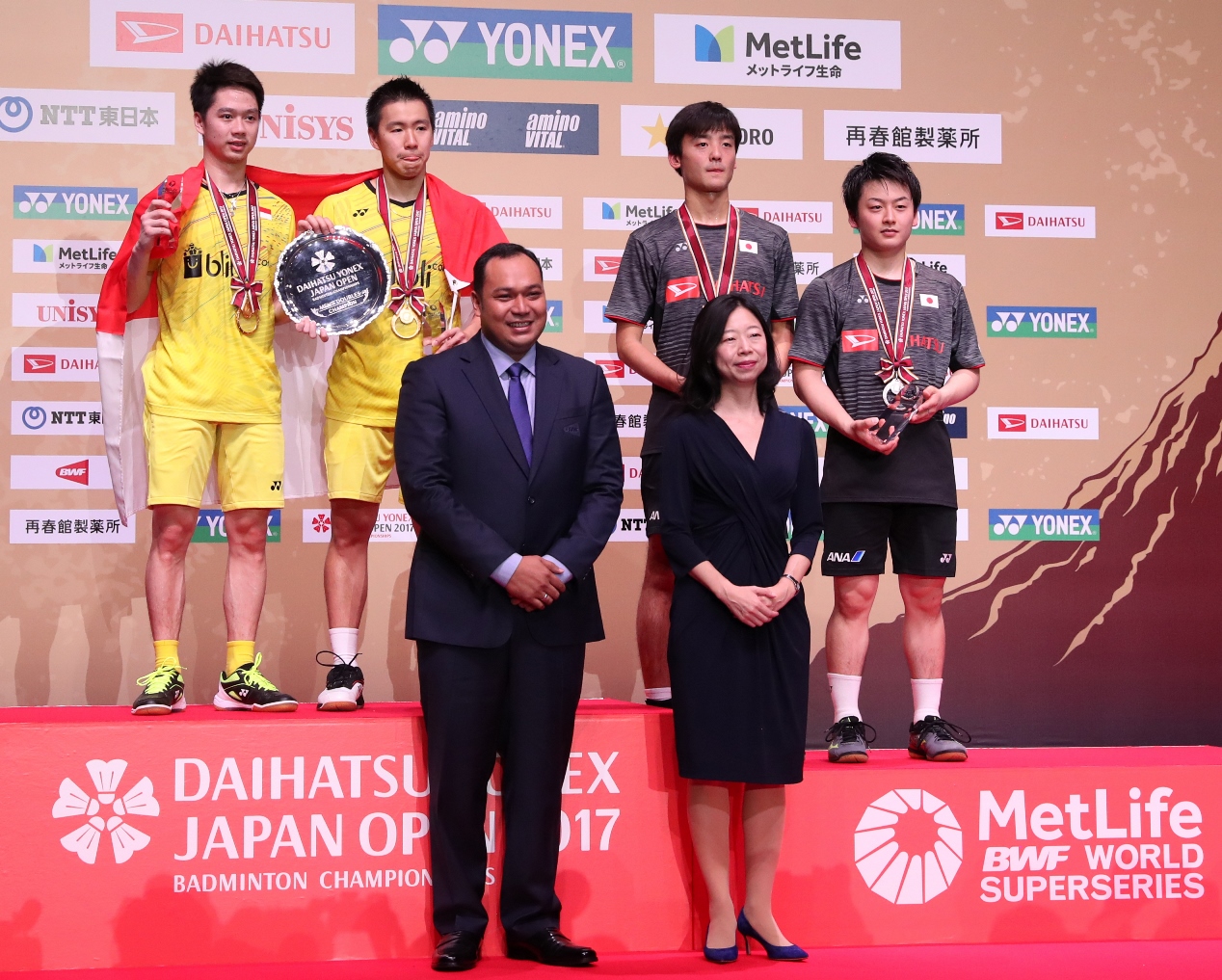 His partner highlighted the significance of winning another Superseries title after some months.

“This Japan Open title means a lot to us. We have not won any titles recently so now we are back to winning, we are confident. This is very important and meaningful to us.”

As for their return to the summit of the world rankings, the Indonesians noted that reward is a by-product of their on-court success.

“Not that we are not aiming to become World No.1 again but we are not focused on that. It’s very important we play our best every time we play and, as a result, we may end up with the world No.1 ranking which would be great.”

Meanwhile, Japan’s Misaki Matsutomo and Ayaka Takahashi provided further evidence that they are emerging from their post-Olympic Games slump, wresting their second crown on home soil and their second Superseries for the year, following victory in Sydney, Australia, in June. 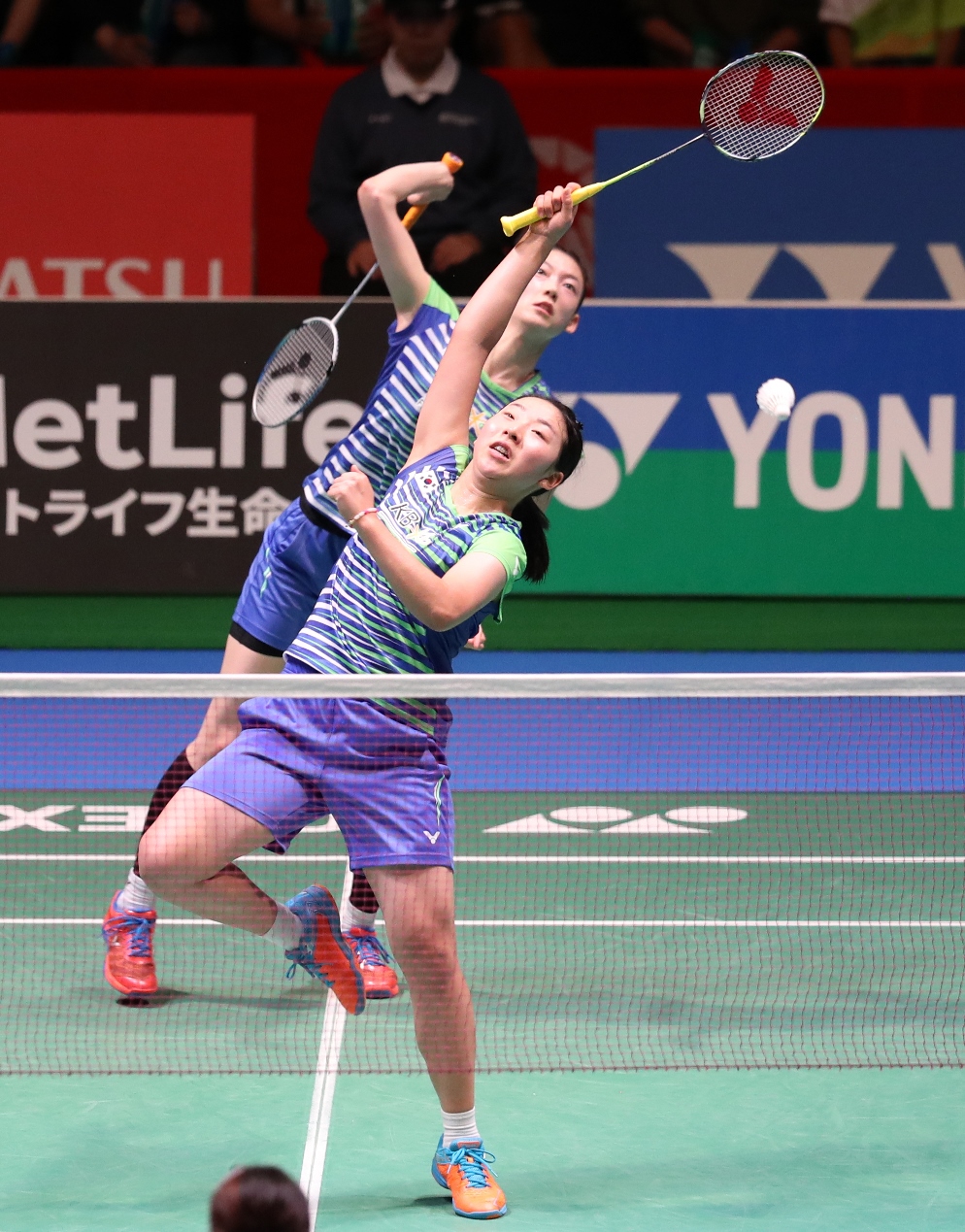 The Rio 2016 gold medallists delivered a 21-18 21-16 gift to fans who packed the Tokyo Metropolitan Gymnasium for the finals. Looking composed for most of their Women’s Doubles clash with Kim Ha Na/Kong Hee Yong, the top seeds answered every question that was asked of them on court, never letting their Korean challengers get away from their grasp.

Even the odd occasion when they were out of position, Matsutomo and Takahashi manoeuvred well to wrestle the ascendancy and seal the honours in 56 minutes. It was a creditable performance by the Kim-Kong connection in only their third tournament together and navigating their way from the qualifying rounds to the Sunday showpiece.

“We are sure we will get better with more matches together,” said doubles ace Kim. 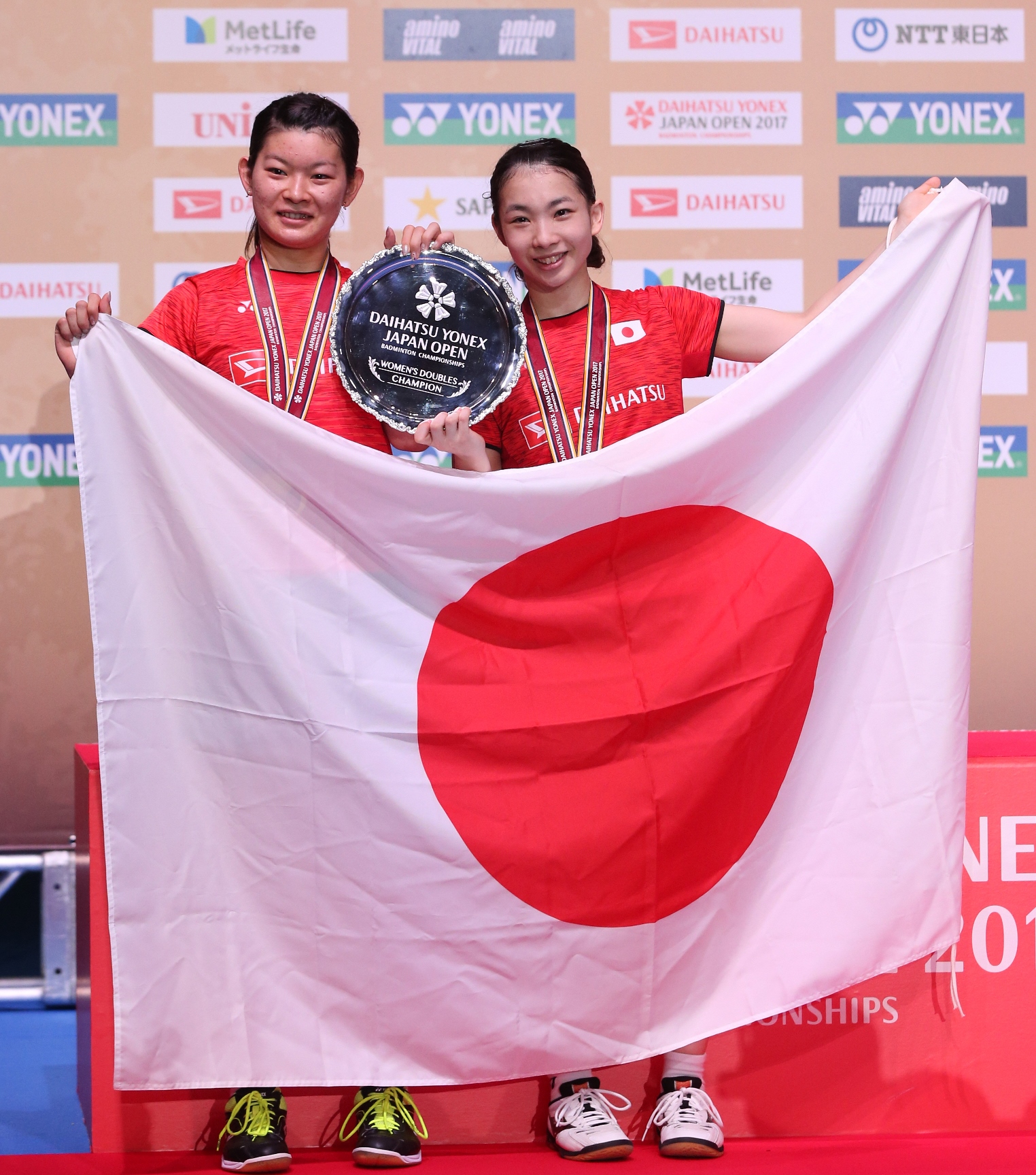 The winners, who had to settle for the runners-up spot last season, were understandably delighted to triumph in front of their compatriots, lifting their ninth Superseries championship.

“We were not in good shape last year after the Olympics and we were not happy to lose the final at home. We wanted to make up for that this year,” said Takahashi.

“It was a very competitive final. Our opponents today beat the Chinese pair who won in Korea last weekend. They are very powerful and aggressive but we were confident about our ability. It’s been two good week for us; reaching the semi-finals in Korea and winning here.”

While the results in both level doubles were about getting back on a winning track for the respective champions, then Mixed Doubles heralded the arrival of a new pair of stars. A week on from finishing runners-up in Seoul, Wang Yilyu and Huang Dongping went a vital step further to clinch the Tokyo title convincingly: 21-13 21-8 over Takuro Hoki/Sayaka Hirota of Japan. 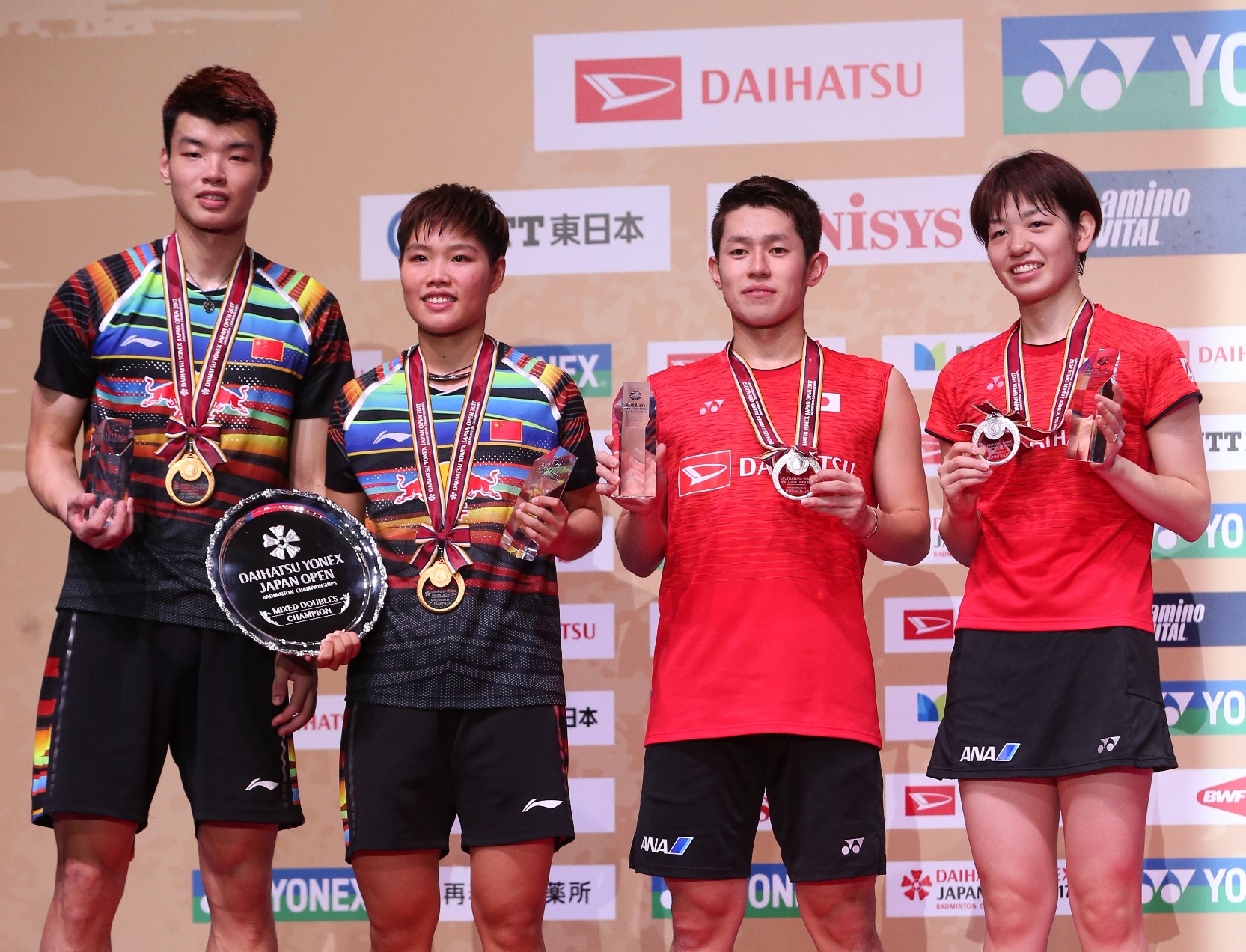 “We are pleased to win our first Superseries title. We are not highly ranked among Chinese doubles pairs yet so we need to keep working hard,” said Wang.

Huang revealed their goal is to become world No.1s in Mixed Doubles and that today’s result “is just the first step for us and I want to maintain a high standard so we can reach our goal”.