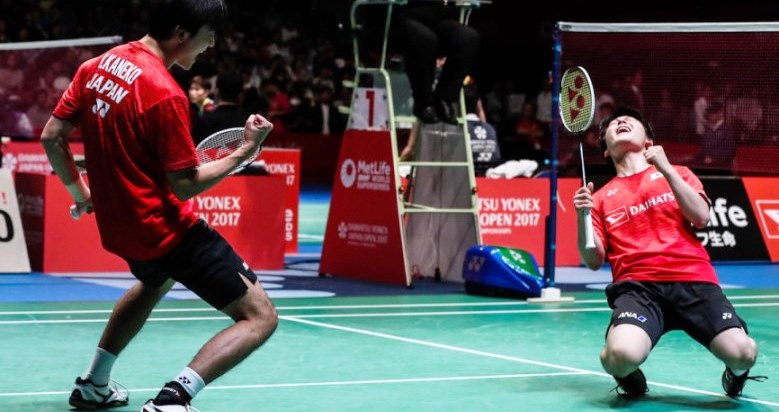 Partners since age 13, this pair savoured the finest moment of their careers, beating Russia’s Vladimir Ivanov and Ivan Sozonov in the DAIHATSU

YONEX Japan Open 2017 semi-finals to become the first Japanese to reach the Men’s Doubles final of their home tournament which began in 1982.

As the last shuttle cannoned off the luckless Sozonov – who endured another miserable day on court – the entire Tokyo Metropolitan Gymnasium erupted in celebration of the milestone achievement; something which tandems of greater esteem had failed to accomplish. That the 12-21 21-18 21-19 epic was recorded versus opposition who knocked out Japan’s leading men’s duo yesterday and thwarted the hosts’ bid for All England glory last year made this result even sweeter for the Land of the Rising Sun.

The outcome was perhaps sweetest for their coach who, while still honing his new craft, knows a lot about the danger which Ivanov and Sozonov pose. In fact, Kenichi Hayakawa had instructed his charges to avenge his agonising loss to the same opponents in last year’s All England finale. The massive smile that lit up his face in the dizzying aftermath of victory was a sight to behold. 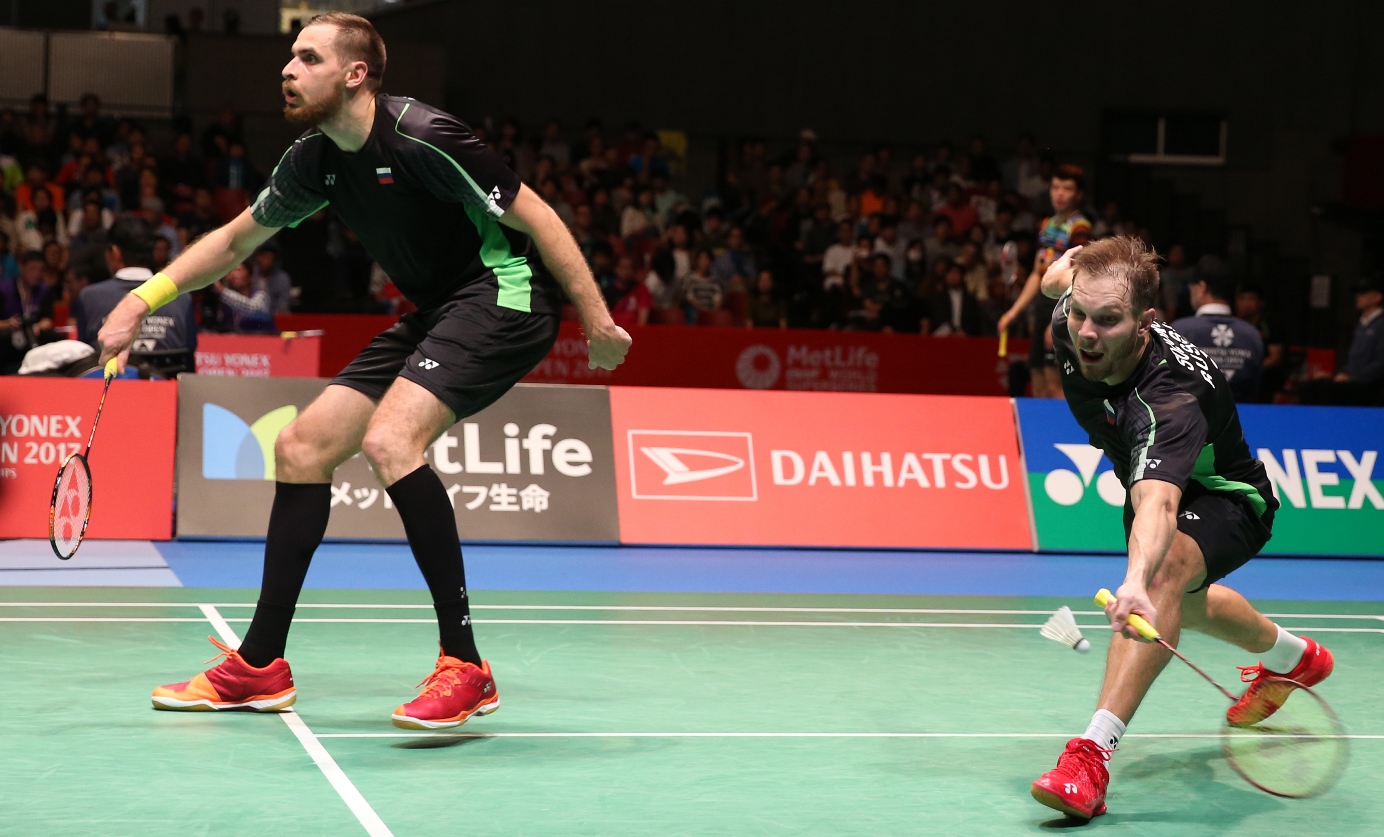 “Reaching the semi-finals was already a dream come true. We are so happy to play in front of this huge Japanese crowd,” said 22-year-old Inoue.

Crediting their coach for encouraging them to communicate more and become closer friends, the racket-wielding heroes agreed this is paying dividends in their results. They also revealed they tried to move the Russians around as much as possible and push them back.

This 65-minute thriller to which fans around the world were treated was not initially destined for television until fate intervened. In the aftermath of Japanese superstar Nozomi Okuhara’s withdrawal from Women’s Singles, another match was required to fill the broadcast void. Organisers determined this Men’s Doubles clash, originally slated for Court 2, was the perfect fit – and so it proved for fans in the stadium and those viewing globally! 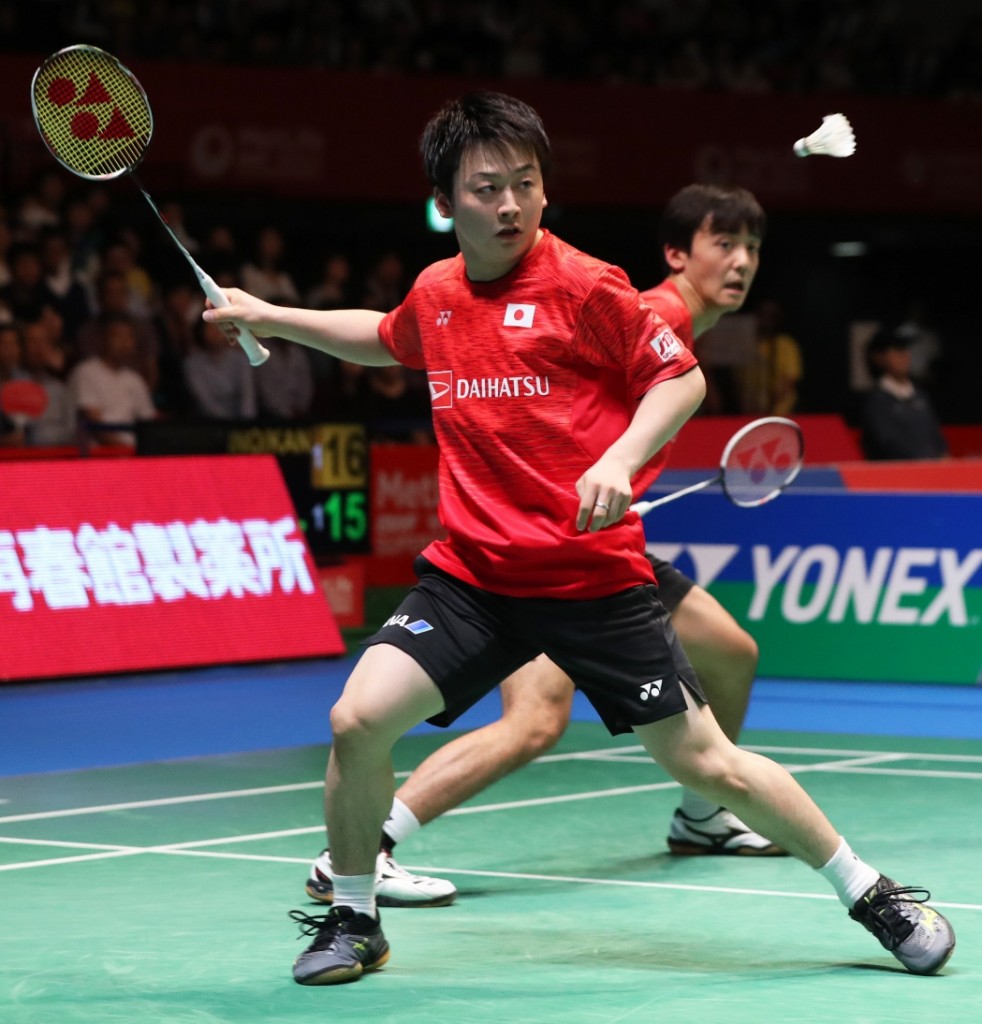 This duel had all the drama expected of Okuhara’s showdown with feisty Spaniard, Carolina Marin.

The first game went to Russia but their rivals were more offensive in the second game. Still, the odds were in Russia’s favour. These guys had already sidelined China’s World champions and Japan’s top pair this week. Suddenly though, more errors were creeping into their play and the Japanese looked livelier, dictating the pace and forcing a decider.

It was all to play for and, with their confidence soaring and the deafening home crowd cheering them, Inoue and Kaneko poured on the pressure. It told on Sozonov who leaked numerous errors. Japan stormed ahead 8-2 but Russia clawed back to 8-8; Ivanov urging his partner on. Scores were neck-and-neck almost all the way. At 17-17, Kaneko and then Inoue came up with big plays that gave them a precious 20-17 lead. They were on the cusp of history.

Russia saved two match points but the Japanese stayed true to their plan and attacked Sozonov again. He crumbled. 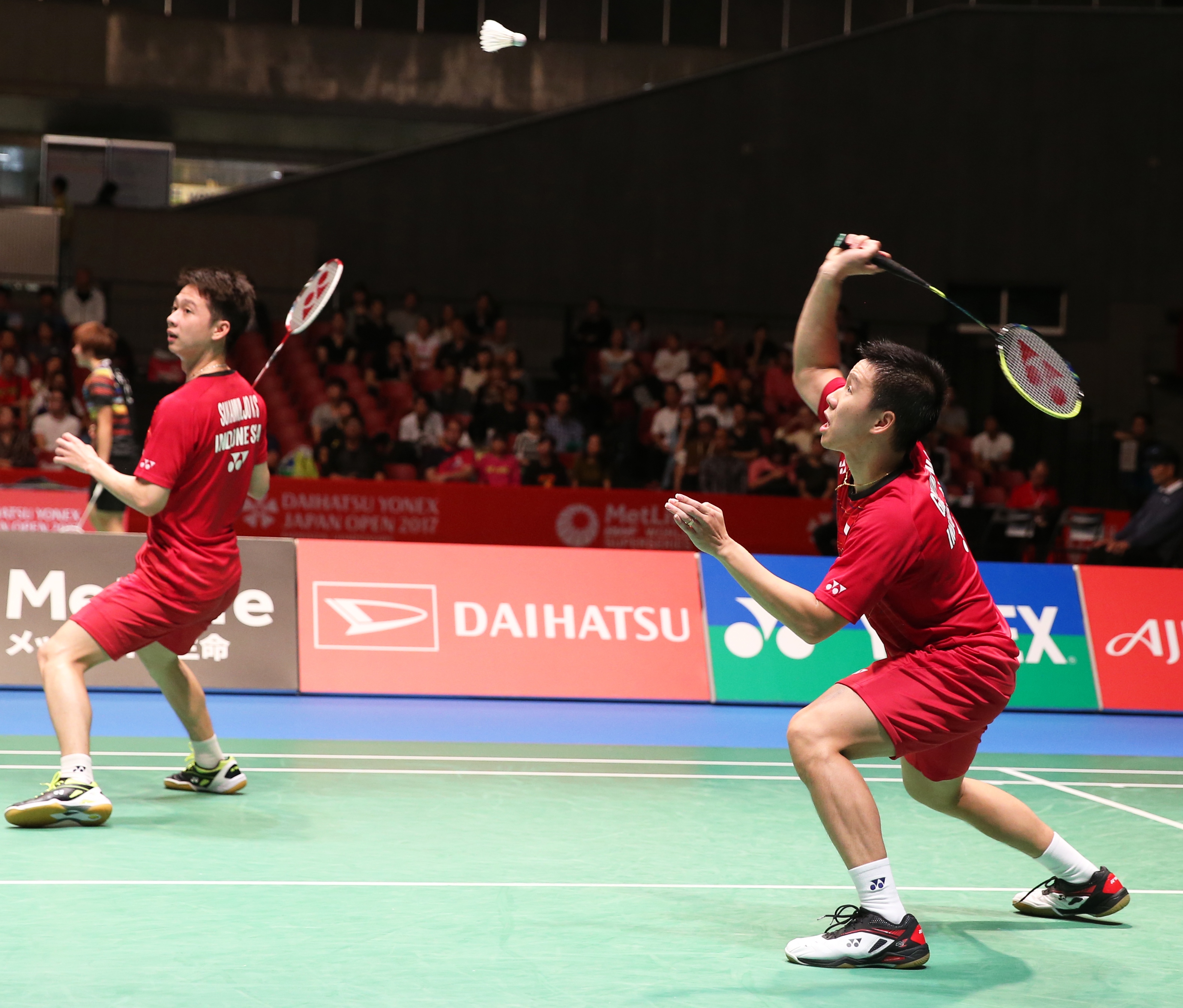 “We are disappointed. This was an opportunity to reach the finals. They played well in defence and made some amazing shots. We had a two-point lead in the middle of the third game but we couldn’t take advantage,” said a dejected Sozonov.

Japan’s assignment will not be any easier in the final. They face the rampant Marcus Fernaldi Gideon/Kevin Sanjaya Sukamuljo who reached their fifth Superseries final of the season. They beat the pair which has given them the most trouble lately – Denmark’s Mathias Boe and Carsten Mogensen. The Indonesians won 21-15 21-14. 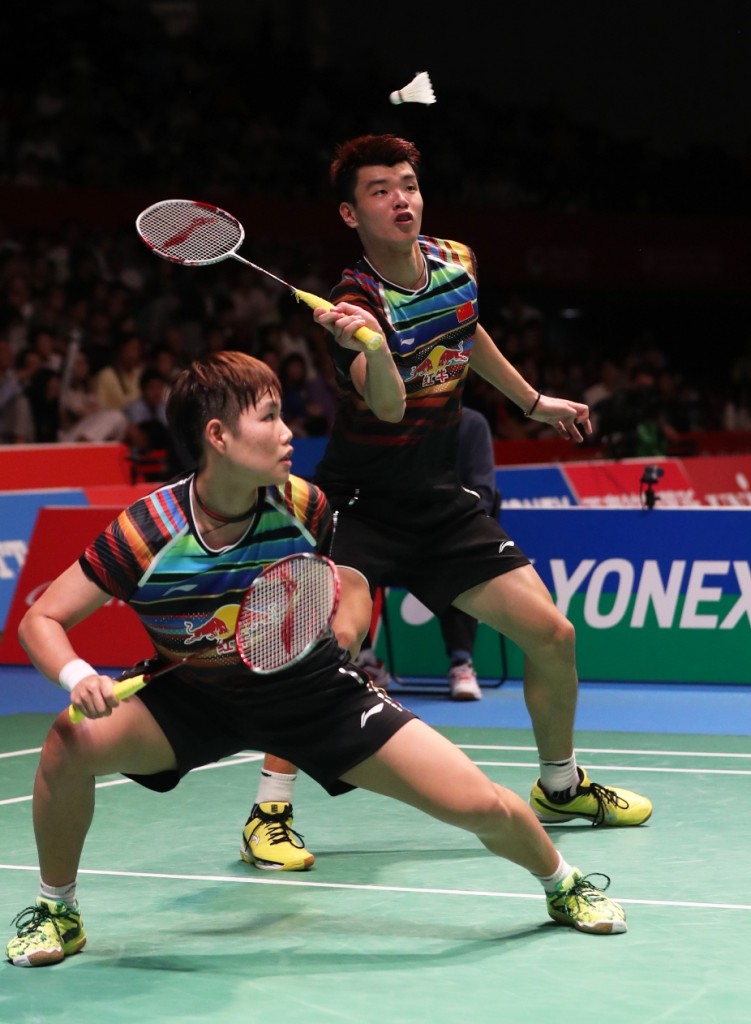 The hosts will have an interest in all three doubles finals, with Olympic gold medallists, Misaki Matsutomo/Ayaka Takahashi, in the Women’s Doubles showdown while the fledging duo of Takuro Hoki/Sayaka Hirota have ridden their luck from the qualifying rounds into the championship match.

Noting they have only been partners since the Australian Open in June, Hoki said they are surprised to be in the final. He and Hirota wore down India’s Pranaav Jerry Chopra/N. Sikki Reddy, 14-21 21-15 21-19. They will be up against the promising Wang Yilyu/Huang Dongping who are hoping to go a step further than their runners-up finish last weekend. Ironically, the Chinese beat Indonesia’s Praveen Jordan/Debby Susanto (21-14 21-19) to whom they lost in Korea.

“We know it will be a hard match because Japan will have home support, so we must not only be physically ready, but mentally ready also,” noted Wang.

In Women’s Doubles, Matsutomo/Takahashi will be aiming to wrest their second home title, having won in 2014 and been runners-up last year. The top seeds thwarted their team-mate Hirota’s bid to contest a second final tomorrow, beating her and Yuki Fukushima, 21-11 21-15. Experienced Korean, Kim Ha Na, and her new partner, Kong Hee Yong, will battle the Japanese for the title. They won their semi-final versus Naoko Fukuman/Kurumi Yonao (21-19 21-11) of Japan. 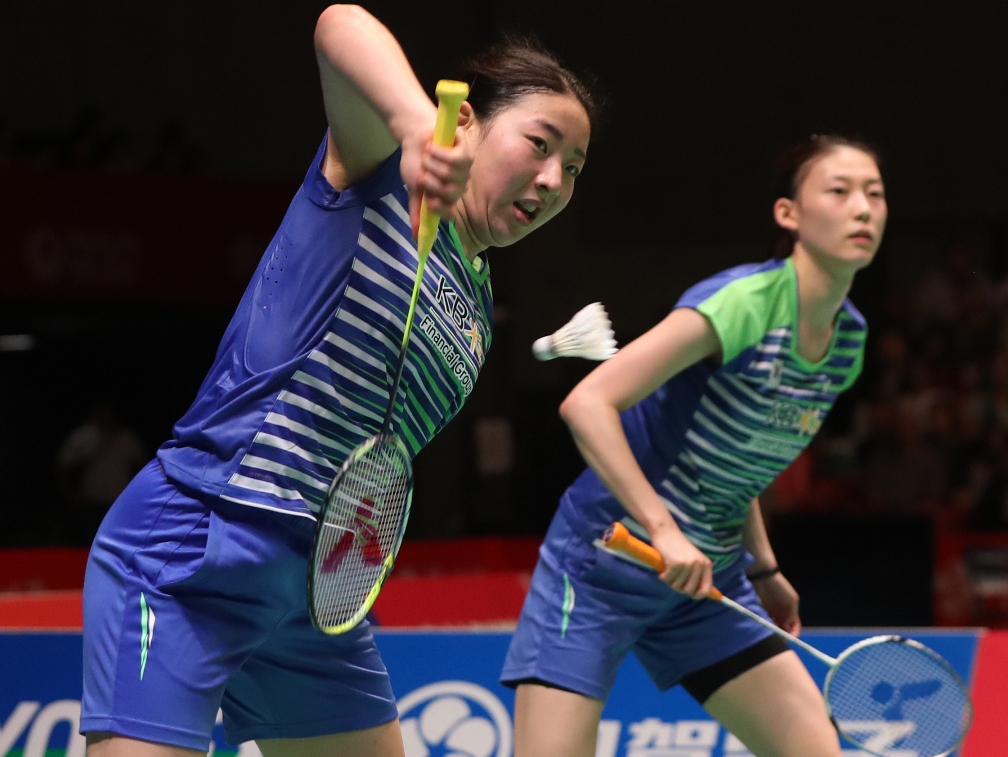