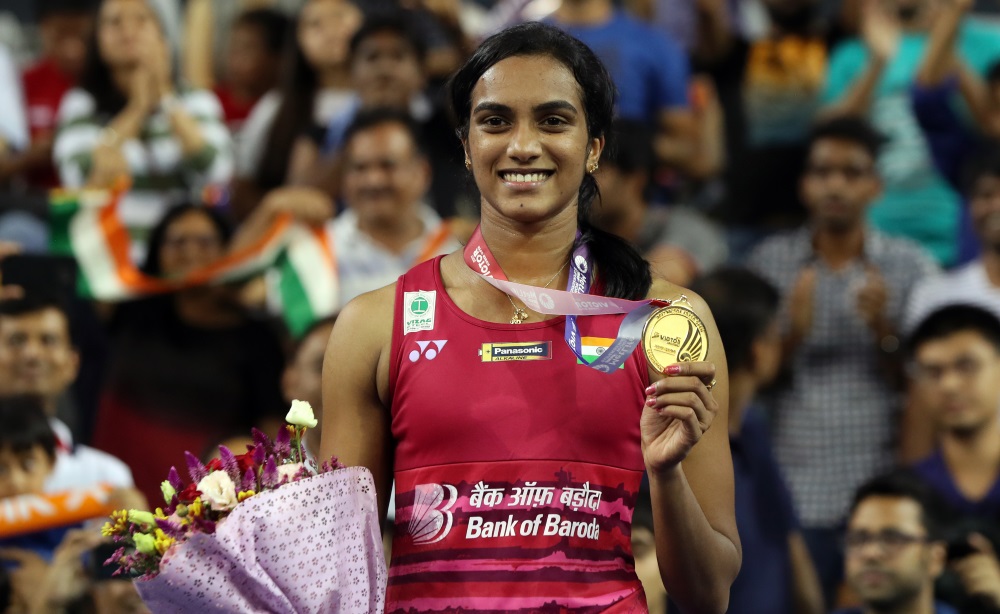 Pusarla V Sindhu bested Nozomi Okuhara in a fitting sequel to their previous epic encounter, in the Victor The Indian raised her arms in triumph at the end of an 83-minute thriller (22-20 11-21 21-18) over the Japanese in the Women’s Singles final today, which had flashes of their titanic encounter in the TOTAL BWF World Championships final last month.

The Pusarla-Okuhara rivalry has acquired a special status, thanks mainly to their contrasting styles of play and an ability to rise to the occasion. Six of their last seven matches have gone to three games, and today was no different.

Okuhara, swift feet helping her retrieve impossible shots, dragged her opponent back and forth across the court with immaculately placed shots; Pusarla stayed in the game with a stubbornness that was the equal of her rival’s and a smash that frequently found its target. With two game points in the first, Okuhara had one foot in the door, but three errors – including a misjudgement at the baseline – followed and Pusarla was ahead.

The match swung one way and then another – Okuhara storming back in the second, and Pusarla pressing forward at the forecourt and leveraging her reach once more to establish a handy lead. The Japanese was wilting under the Indian’s attack – but despite falling behind 5-11, there was never a doubt that she wouldn’t throw everything she had into the comeback. The match caught fire, with rallies that once again saw a gladiatorial effort from both. Crucially for Pusarla, Okuhara was the one whose near-mythic consistency betrayed her. A 56-shot marathon saw Okuhara make the final error; both collapsed to the floor, but Pusarla (featured image) had won the penultimate battle. A final wayward toss from Okuhara was the reward Pusarla had won for her unflinching determination through the crests and troughs of another memorable final – her third Superseries victory, which prevented Okuhara from claiming her third title on the trot.

“It’s very special and very important,” said Pusarla. “I couldn’t control the shuttle in the second game and she got a big lead. In the third set, even though I was ahead, she came back. There were some really long rallies, just like in the World Championships. I’d lost that final after leading 19-18 – but that wasn’t on my mind. I was going with the flow… Everybody used to say I had a rivalry with Carolina (Marin), but now maybe they’re saying it’s Okuhara.”

Earlier, Anthony Ginting had his first Superseries win, in a Men’s Singles encounter that was so different, in tenor and quality, from the Women’s Singles.

The all-Indonesian battle between Ginting and Jonatan Christie was a nervy, error-ridden affair that went to Ginting 21-13 19-21 22-20 after 69 minutes.

The drift appeared to play a part, with neither player fully able to control proceedings from one end, which saw numerous tosses fall long. Ginting was against the wind in the early part of the third game, and he knew he needed a handy lead for he would be at a disadvantage at the tail end. This he managed, getting a 11-7 cushion at the break. Christie, who appeared somewhat in a reactive mode compared to his opponent, came into this own late in the match and the final hung precariously at 19-all and 20-all. It was Ginting’s greater initiative and risk-taking that paid off; as he had all match, he untiringly rose for the jump smash, and the final few points were his.

“It was important for me to get a lead at the break in the third because of the drift,” said Ginting. “We know each other’s game so well; it was all about keeping focus. My style is to keep attacking and that’s what I did even when the score was tight late in the match. Luckily, it paid off. Of course this is a very memorable victory for me as it’s my Superseries title in my first major final.”