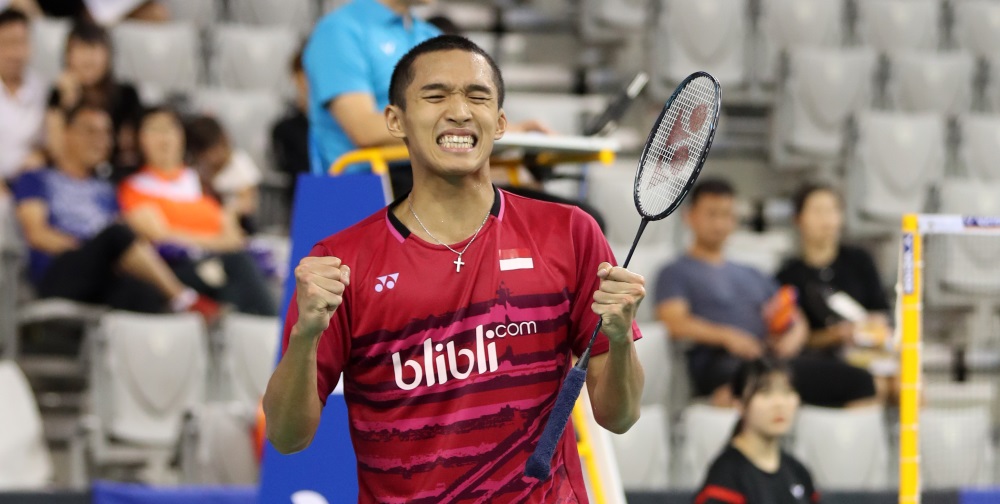 Not since June 2008 have two Indonesians contested the Men’s Singles title of a Superseries. That was at the Indonesia Open, when Sony Dwi Kuncoro beat Simon Santoso for the title. Christie, aware of the prolonged drought in the fortunes of Men’s Singles in his country, was a delighted and relieved man when he closed out a one-sided semi-final against Chinese Taipei’s Wang Tzu Wei, 21-13 21-17: “I don’t know how long it has been since two Indonesians played the final. Very happy, this is because of our hard work over the last two years.” Both Christie and Ginting are in their first Superseries final.

“The wind was behind me in the first game, I had to keep pressing forward, try to control the shuttle as best as possible. I was keen on taking the opening game as I knew I could play better against the wind in the second. I kept talking to myself, telling myself I could do it. This is my first Superseries final so of course I’m very happy.”

The Korean started true to style, moving with silken speed and rushing Ginting into conceding the openings. The Indonesian was comprehensively outplayed, but he dug in for the long haul. Refusing to be intimidated by Son’s airtight defence, the Indonesian kept up the attack – shooting off to big leads in the two remaining games and staying unruffled even as Son drew close.

The crucial phase was midway through the second, when Son, trailing 1-10, clambered back to within a couple of points. Ginting didn’t let the Korean’s comeback affect him, and he levelled at a game apiece.

A similar pattern played out in the third, with Son falling behind and attempting to reduce the deficit, but Ginting, to his credit, never let up the attacking pressure.

“I didn’t think of losing my lead; I was just focused on my strategy at that particular moment,” said Ginting. “I just tried to play safe, not make errors. Son has a solid defence, but his attack is also good, and I didn’t want to concede the attack to him.

“This is my first international final. I have lost in five or six semi-finals. It has been disappointing.” In the Women’s Singles, World champion Nozomi Okuhara eased to her ninth win in 13 meetings against Japanese compatriot Akane Yamaguchi, 21-17 21-18. A repeat of the World Championships title clash was on after India’s Pusarla V Sindhu followed Okuhara into the final, beating China’s He Bingjiao 21-10 17-21 21-16.