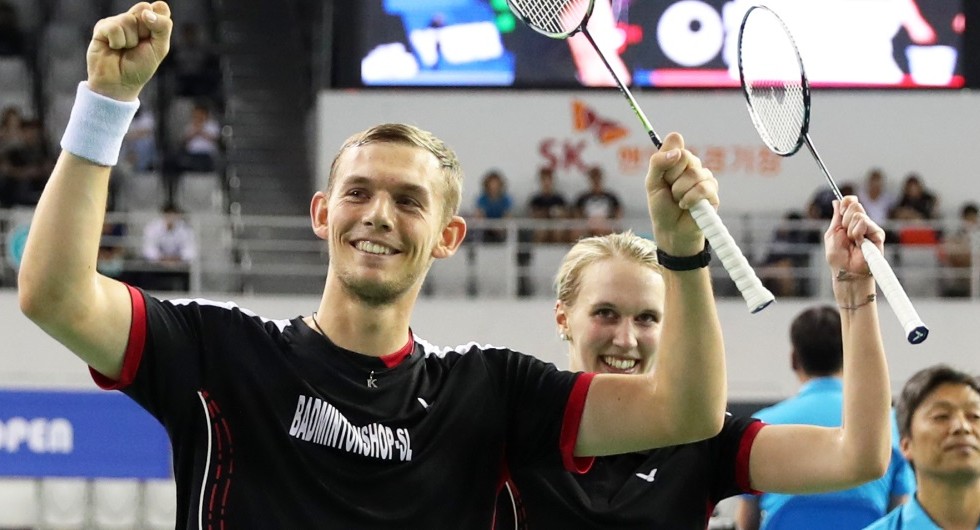 A young German pair made a big impact at the Victor Korea Open today, making the semi-finals of a World Superseries for the first time. Marvin Emil Seidel and Linda Efler, both in their early 20s, and not often seen in Superseries events, shot past Malaysia’s Goh Soon Huat and Shevon Jemie Lai at the end of a close three-game thriller, 18-21 21-13 21-18.

The Germans, promoted from the qualifying round at the start of the event, had never even won a Superseries match in the main draw before this.

“Unbelievable!” said Efler. “I don’t know what to say!”

After losing a close first game, the Germans held the lead all through the second and third. Goh and Lai made a valiant last-ditch attempt, recovering from 11-16 to catch up with the Germans at 18, but Seidel put in the extra burst at that point that swung the match the Germans’ way, darting to the net to earn match point and converting at the first opportunity.

“We were really nervous especially in the end,” said Seidel. “It was hard for the body to work, you feel so tired you can’t move. But you have to focus on every point and that’s what we did.”

Seidel and Efler became the first German pair in a Superseries semi-final since Michael Fuchs and Birgit Michels at the Australian Open in June 2014.

Goh and Lai’s loss was shortly after compatriots Chan Peng Soon and Cheah Yee See made their first Superseries semi-final as a pair. The Malaysians had a comfortable 11-4 lead over Koreans Seo Seung Jae and Kim Ha Na, but with the crowd cheering on the home pair with every point won, the Malaysians started to feel the pressure. The Koreans targeted the relatively inexperienced Cheah, and were soon level at 16. To his credit, Chan rose to the occasion, covering up for his partner and extracting the vital lead at the death. Known for his nervous serves under pressure, Chan took an eternity to serve at match point, but the Malaysians were gifted the final point as Kim Ha Na allowed his serve to fall, and the shuttle found the line.

“She was quite nervous in the third and I had to keep motivating her,” said Chan.

The Chinese had a harder time against young Japanese pair Mayu Matsumoto/Wakana Nagahara. The Japanese stole the second game from three match points down, but Huang/Yu ran up an early lead in the third and kept it till the end: 21-17 22-24 21-15.