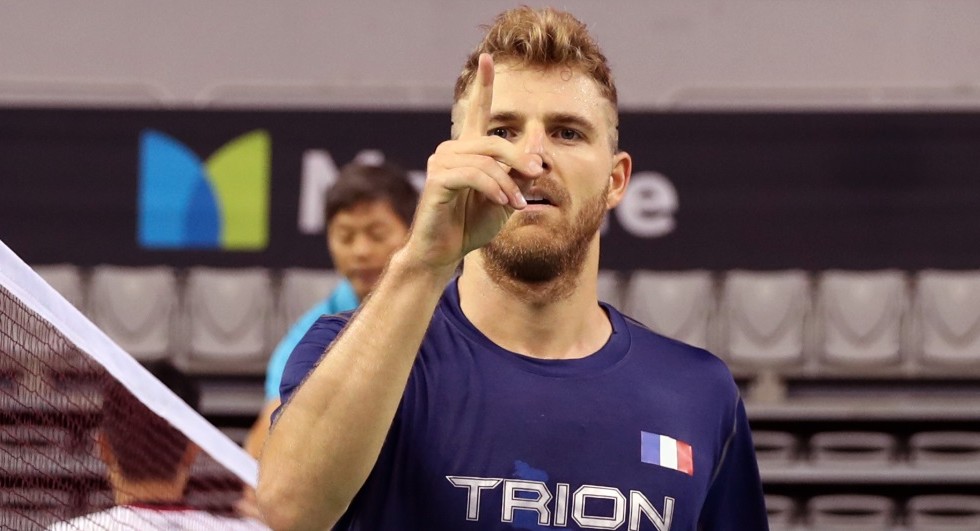 Brice Leverdez’s heady form of recent vintage saw him claim another big scalp, as he knocked out No.4 seed Chou Tien Chen in the opening round of the Victor Korea Open today. The Frenchman (featured image) was the talk of the badminton world early in the TOTAL BWF World Championships last month for having ambushed title contender Lee Chong Wei in the first round. Today he played with the same flair and energy in picking apart Chou, 23-21 21-14, for his sixth win over the Taiwanese in seven meetings.

Leverdez has tormented Chou since their first meeting in 2011, and had a 6-1 record going into today’s Men’s Singles first round clash. Yet, Leverdez was thrilled at continuing the dominance as he closed it out in straight games unlike in most of their earlier encounters that had gone three games. Having beaten a third top-ten player this year, Leverdez stated that he had finally found the self-belief that had evaded him for long.

“I’m happy to win in two sets. Every time when I beat those (top ten) players, I always struggle in three games, I leave a lot of energy behind,” said Leverdez. “Today I didn’t expend much energy, I’m ready for tomorrow. I need to win more in two sets like this.

“I understand the game better. I’ve improved a lot technically. I know I can be better. Nowadays I feel more confident on court. When you’re a French player and you arrive at this level, you feel out of place, you feel alone. Now I feel, I don’t care about anyone, I’m Brice Leverdez and I’m one of the best and I will be one of the best soon.

“I’m enjoying my game, having fun on court, I can play well when I play like this. The first set wasn’t good, I didn’t have the feel, (although) I was lucky to win. But I could be quite focused and strong mentally at the end of the game. The second set I thought would be difficult, but I could make him annoyed and stressed by my game as I didn’t give him any chances to take the net or attack, I was pushing a lot on him, and he didn’t like it. I was playing a lot of mental games with him and he didn’t like it. There was mixed luck for the Verma household, as Sourabh’s younger brother Sameer got the better of eighth seed Tanongsak Saensomboonsuk (Thailand) 21-13 21-23 21-9.

Top seed Son Wan Ho (Korea) progressed without fuss, but he will be wary of his next encounter as he faces India’s Parupalli Kashyap. The Indian, who came through the qualifying rounds, shut out Chinese Taipei’s Hsu Jen Hao 21-13 21-16. Okuhara was given a stiff workout by Beiwen Zhang. The USA player appeared to have sewn up the first game with an 18-14 lead, but Okuhara, in typical combative fashion, picked off seven of the next eight points to take the game. Zhang stayed level until 11 in the second, after which Okuhara steadily gained on her.

Korea had a good day in Women’s Singles with Sung Ji Hyun, Kim Hyo Min and Lee Jang Mi making the second round.

In Men’s Doubles Chinese Taipei’s Lu Ching Yao/Yang Po Han survived a topsy-turvy ride to get past Russia’s Vladimir Ivanov/Ivan Sozonov. The Taiwanese recovered from a first-game drubbing to earn four game points in the second, but the Russians levelled and had a match point of their own before Lu and Yang edged past them 24-22.

The Taiwanese again found themselves on the back foot early in the third but six straight points helped them equal at 8; they refused to let up the momentum and closed out the match 11-21 24-22 21-14.

Another Taiwanese pair to make the second round was Lee Jhe-Huei/Lee Yang, who survived a difficult opening assignment against Japan’s Takuto Inoue/Yuki Kaneko 23-21 18-21 21-17.