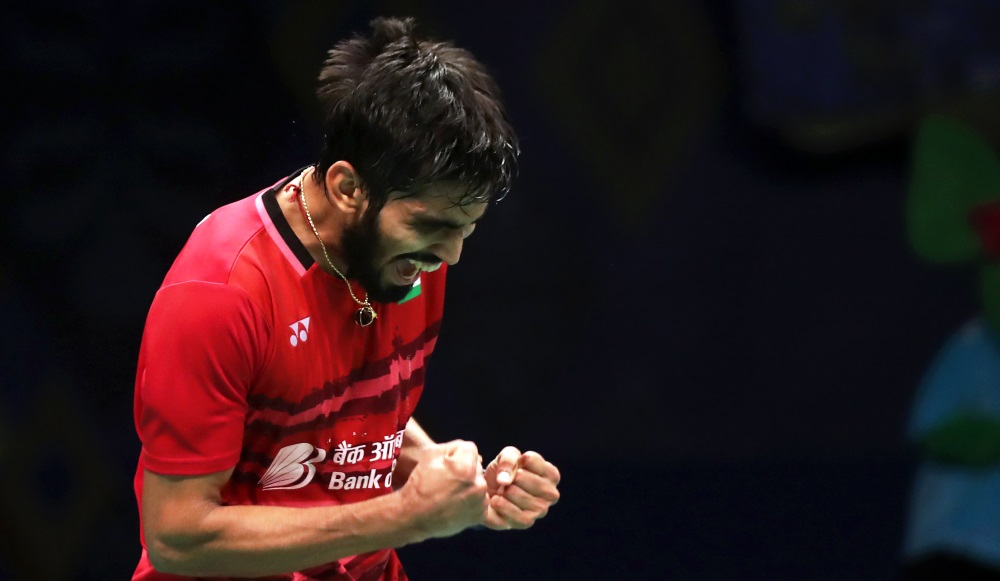 Kidambi Srikanth’s mid-season surge that saw him claim back-to-back World Superseries titles ensured his rise to the top of the Destination Dubai Rankings at the halfway stage of the MetLife BWF World Superseries circuit.

Kidambi’s success was a pointer to the fortunes of the younger generation of shuttlers in the first half of the season. The Indian (featured image) shook off a long spell of lean form with a strong showing at the OUE Singapore Open, where he lost to compatriot Sai Praneeth in the title clash. The performance seemed to have done wonders to his confidence, for he was then unstoppable, running up a sequence of ten straight wins over the two Superseries in Indonesia and Australia. The Indian amassed 34,260 points, nearly 4,000 points clear of No.2 Chou Tien Chen (Chinese Taipei).

It was a bright early half for Indian Men’s Singles shuttlers, with Praneeth winning his first Superseries crown. The Indian, who has long been in the shadow of his more established compatriots like Kidambi and Parupalli Kashyap, finally broke through in his first Superseries final. He was also a quarter-finalist at the Australian Open, which helped him climb to No.10 on the Destination Dubai Rankings.

Chou Tien Chen, placed at No.2, was haunted by inconsistency; his best being a runner-up place at the Yonex-Sunrise India Open. The Chinese Taipei player had two first-round losses – in Singapore and Australia – which offset his early season form that saw him make the semi-finals of the All England and the title round in India.

Shi Yuqi (No.3) leads the three Chinese in the top ten of the Destination Dubai Rankings. The young Chinese followed up his runner-up finish in England with a quarter-final in Singapore and a semi-final in Australia, helping him rise four places in the rankings. Shi, having graduated quickly to the elite level after dominating the juniors, has emerged as the face of the younger generation of Chinese shuttlers. His senior compatriots Lin Dan and Chen Long are at No.6 and No.9 respectively. Lin played four Superseries, of which he won one – the Celcom Axiata Malaysia Open, in a high-profile final against local favourite Lee Chong Wei. Chen too played four Superseries, and steadily got better after a second round crash at the All England. Following quarter-finals in Malaysia and Indonesia, he made the title round of the Crown Group Australian Open, where he looked a shade below his best in the final against Kidambi Srikanth. Chen will hope to get his act together as he bids to win the World Championships for the third time. Korea’s Sudirman Cup hero Son Wan Ho is at No.4. Son played all six Superseries; his best being semi-finals in Malaysia and Indonesia. The Korean had his moments but was unable to capitalise in two semi-finals.

Ng Ka Long (No.5) had a modest season; the Hongkonger was a second-round loser in five Superseries; the only exception was at the India Open, where he made the semi-finals before falling to eventual champion Viktor Axelsen (Denmark).

In seventh place is Lee Chong Wei, who made but three appearances. Lee started spectacularly, winning the All England and finishing runner-up on his home turf; his title defence of the Indonesia Open ended in the second round to India’s HS Prannoy.

One spot behind is Axelsen, who too had a great start to the season with his first India Open title in his third straight final in New Delhi. Having won his first Superseries title in Dubai last December, things were going exceedingly well for Axelsen. But then the Dane faltered, as he crashed out in early rounds in the next three events. Lee and Axelsen both slipped by four places in the Destination Dubai Rankings. The top eight players at the end of the 12-leg Superseries circuit will be invited to the Dubai World Superseries Finals to be held at Hamdan Sports Complex in the desert city in December.