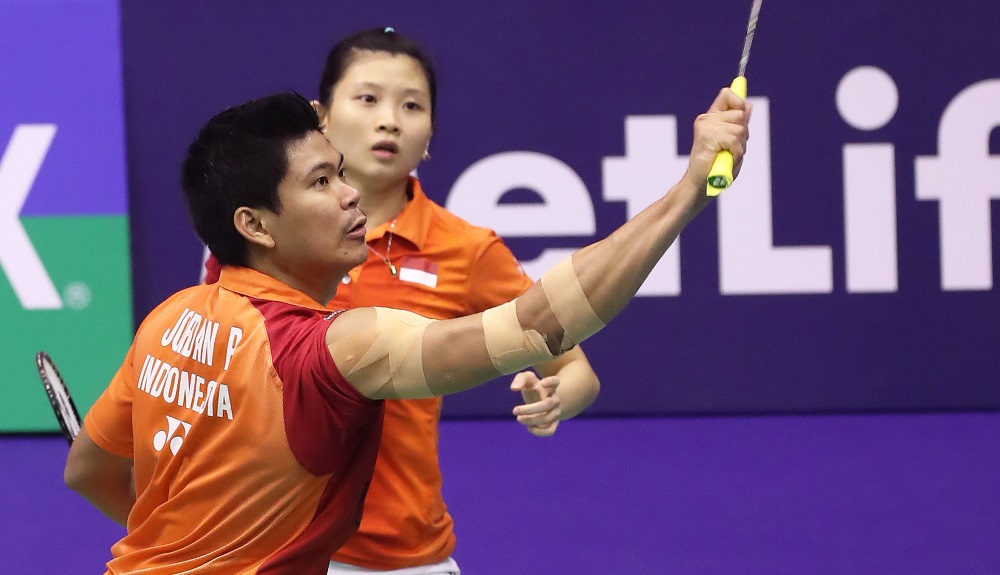 Praveen Jordan and Debby Susanto’s impressive run to the final of the CROWN GROUP Australian Open has seen them jump ten places in the Destination Dubai Rankings.

The Indonesian Mixed Doubles pair were in sparkling form in Sydney, making the final without losing a game, and enjoying a big lead in the final game against China’s Zheng Siwei and Chen Qingchen. A rapid collapse from that point saw them finish runners-up, but the 7800 points gained helped them move into the top ten of the Destination Dubai Rankings into seventh place.

The Indonesians (featured image), whose best before Sydney was a quarter-final at the OUE Singapore Open, will hope that their show in Australia portends a more consistent second half of the season.

A number of young Mixed Doubles pairs have emerged in recent months, and their positions on the Destination Dubai Rankings, halfway through the MetLife BWF World Superseries season, are indicative of the new dynamics in the sport. However, it is still China that hold the edge, with Lu Kai/Huang Yaqiong and Zheng Siwei/Chen Qingchen sitting pretty at the top.

Lu and Huang barely did a thing wrong through the first four Superseries, reaching every final, and faltering only once. Victories at the Yonex All England, the Yonex-Sunrise India Open and the Singapore Open – besides a runner-up finish at the Celcom Axiata Malaysia Open to Zheng/Chen – saw their ranking points swell to 38,750 points, before an unexpected second round exit in Indonesia saw them fall to more earthly levels. Zheng and Chen nearly matched the exploits of Lu/Huang. After a second-round loss at the All England, the young Chinese were on fire, reaching every subsequent final, and winning the Malaysia Open and the Australian Open. Their only two defeats were to compatriots Lu/Huang in India and to home favourites Tontowi Ahmad/Liliyana Natsir at the BCA Indonesia Open. in Mixed Doubles; despite the retirement of their seniors like Zhao Yunlei and Ma Jin in the post-Rio Olympics period, China have plenty of options – with pairs like Wang Yilyu/Huang Dongping (No.18) and Zhang Nan/Li Yinhui (No.20) also in the reckoning.

At No.3 are England’s Chris Adcock/Gabrielle Adcock – semi-finalists in England and India and quarter-finalists in Indonesia and Australia. The England pair lost a heart-breakingly close semi-final on home turf to Lu/Huang after holding four match points.

Tontowi Ahmad/Liliyana Natsir, who had problems with consistency owing to Natsir’s injury troubles, are at No.4. The Indonesians achieved a long-held dream when they won their home title for the first time.

Among the younger pairs, Thailand’s Dechapol Puavaranukroh/Sapsiree Taerattanachai showed their mettle at the Singapore Open, finishing runners-up in three games to Lu/Huang, besides chalking up quarter-final finishes in Malaysia and Australia. The Thais are perched at No.5, just ahead of Tan Kian Meng/Lai Pei Jing, who emerged as Malaysia’s No.1 pair. Tan/Lai were consistent; their best results being a semi-final in Singapore and a quarter-final in Indonesia. With senior compatriot Goh Liu Ying falling prey to her old injuries once again, Tan and Lai have kept Malaysia’s hopes alive at the top level in Mixed Doubles.

Korea’s Sudirman Cup stars Choi Solgyu and Chae Yoo Jung (No.8) couldn’t quite translate their heroics in the team event to success at the Superseries, as they fell to a first round loss in Indonesia and a second round loss in Australia. Japan’s Kenta Kazuno/Ayane Kurihara (No.9) have had a modest season – with their best being a quarter-final in India. It was their younger compatriots Yuta Watanabe/Arisa Higashino (No.11) who stole the show for Japan, beginning the Superseries season with a semi-final at the All England. While they were not as consistent as Kazuno/Kurihara, Watanabe/Higashino’s rapid ascent has marked them out as one of the pairs to watch this season.

Of the top ten pairs, the pair that struggled the most to live up to their reputation was Joachim Fischer Nielsen/Christinna Pedersen. The Danes, quarter-finalists in England, Malaysia and Singapore, then fell to first round losses in Indonesia and Australia. Fischer Nielsen in particular appeared jaded at the Australian Open and might look forward to the short break in the season before the all-important TOTAL BWF World Championships in August. There are six events left in the MetLife BWF World Superseries circuit; the top eight pairs on the Destination Dubai Rankings will make it to the season-ending finale, the Dubai World Superseries Finals at Hamdan Sports Complex in December.