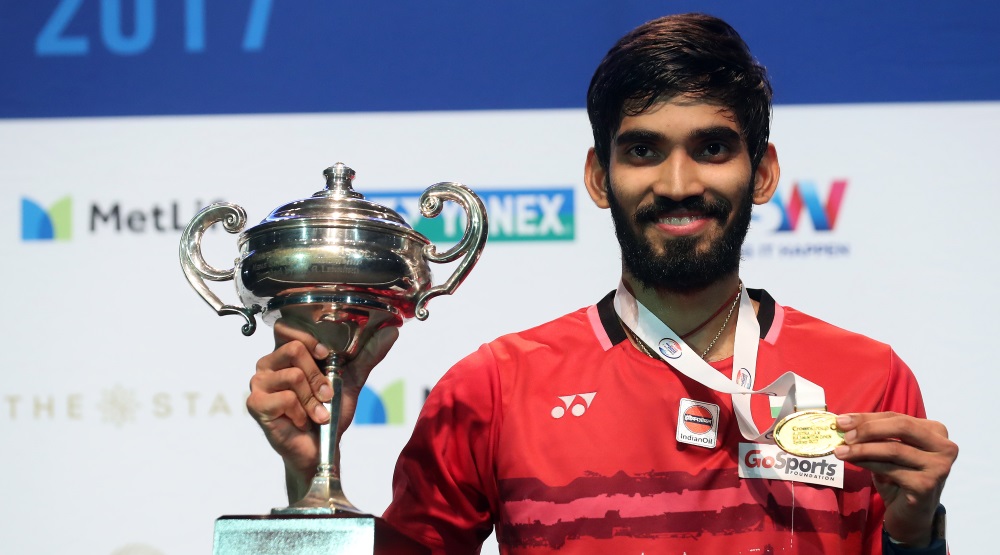 The dream held it spell into the second straight week for Kidambi Srikanth as he won the CROWN GROUP Australian Open 2017 against Olympic champion Chen Long.

His Men’s Singles triumph today capped a stellar run that began with his runner-up finish at the OUE Singapore Open, followed by the title triumph at the BCA Indonesia Open last week. In the final today Kidambi delivered another perfect performance: judicious attack, tight net control and a willingness to stay the course in the rallies.

One point early in the second game defined the match: Kidambi challenged Chen with long clears, on and on, until he rose to hammer a down-the-line winner. Chen, a master of playing error-free for long spells, had been hustled on his own turf, and he had faltered.

Kidambi later acknowledged that point had swung the match his way: “I was not challenging him; I was challenging myself, about how long I can last. It was a critical point, I think it changed his attitude maybe, if he had won that rally he would’ve kept playing that way. But not many like those rallies happened in the second game after that. So I think that really changed the attitude of both of us.”

The Indian was lost for words while talking of his second straight Superseries win:

“It’s just that I was not thinking of winning or losing. I missed competitive badminton during my break last year and wanted to enjoy the match. These conditions are such that you can’t really attack, it’s a bit slow, you have to be prepared for a long match. In all the breaks today I had the advantage, (coach) Mulyo told me to keep it going, not to make simple mistakes and allow him back into the match.”

While Kidambi barely put a foot wrong, Chen appeared below par, unable to stay in the rallies and making far too many errors. A short serve gave Kidambi match point; a wayward clear on the next rally handed the Indian the title.

Chen, who had played two long matches before the final, said he was still recovering from gastroenteritis.

“As a whole I played very well, but since I arrived in Sydney I have had gastroenteritis and diarrhoea, so I haven’t been at my best physical condition,” said Chen. “But since I made the final I wanted to continue to play as well as I could. After I go back to China I am going to compete in the National Games immediately so it is going to be tough.”

In the Women’s Singles final, Nozomi Okuhara won her first World Superseries title since the Yonex All England 2016, displaying the full measure of her indefatigable retrieving style in getting the better of Japanese compatriot Akane Yamaguchi. Having clinched the match 21-12 21-23 21-17, Okuhara dedicated the win to her home city of Nagano, which experienced an earthquake this morning.

The Okuhara-Yamaguchi rivalry has produced many a memorable match; Okuhara led 7-4 going into the final, but Yamaguchi had the edge, having won four of their last five encounters. Today’s final wasn’t up there with their best matches, but it featured a great fightback from the brink by Yamaguchi.

Uncharacteristically, Yamaguchi looked tentative through the early part of the match, so unlike her bustling self during her fine semi-final victory over top seed Tai Tzu Ying.

Yamaguchi’s tentative play, coupled with Okuhara’s relentlessness, saw Okuhara sit pretty at 14-5 in the second with the first in her bag.

It was at this point that Yamaguchi rediscovered herself; the tentativeness was gone and the bustling attacking play returned. Yamaguchi’s courage under pressure saw her climb back steadily, pouncing on narrow openings to steal the second game.

With both having hit their rhythm, it was neck-and-neck in the third until 17. Okuhara’s greater consistency proved to be the match-winner; Yamaguchi overhit a couple of shots and suddenly it was all over for her.

“This morning my home town had an earthquake so I wanted to send good news to my home town. Yesterday I said that I wanted to show that Women’s Singles in Japan is at a high level so in this match when Akane Yamaguchi really fought in the final game, we showed that,” said Okuhara.

“I received messages from my friends in Tokyo saying I would be fine if I stayed confident. So I was thinking of what I could do from here because they have been good to me. I thought the only thing I could do for them is bring good news to them. So I worked hard for everyone who supported me to make them be happy.

“After the Olympics I had an injury and was a bit nervous. But this year my target tournament is the World Championships and step by step I am getting better. I wanted to see how far I could go so I played the game hard and I am happy about the result.” Yamaguchi admitted her mistakes in the beginning had cost her dear:

“I made a lot of mistakes at the beginning. I would rather say this was about my own mistakes. I had a feeling that this maybe wouldn’t end well. I troubled myself a lot with thinking about whether I could make the game a good one and win the game.”