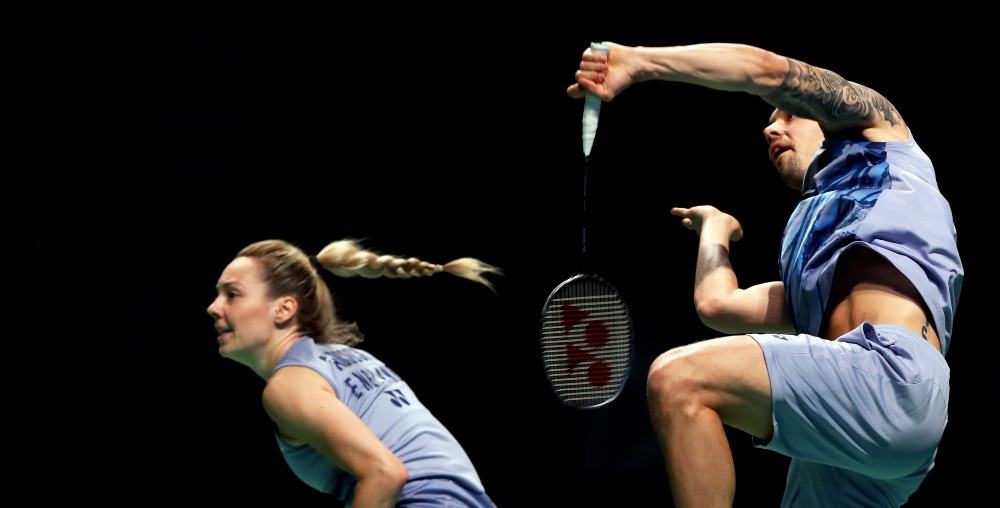 Chris Adcock and Gabrielle Adcock’s bright form of 2017 showed no sign of letting up as they made the quarter-finals of the CROWN GROUP Australian Open 2017 today in Sydney.

The European champions, semi-finalists at the Yonex All England and the Yonex-Sunrise India Open, and quarter-finalists at the BCA Indonesia Open last week, held off a strong challenge from Korea’s Choi Solgyu and Chae Yoo Jung in the Mixed Doubles second round. The England pair were in a neck-and-neck battle with the Koreans, only managing to break free at the very end to seal the match 21-14 17-21 21-18 in 62 minutes. “Very close match,” said Chris Adcock. “We had patches where we felt good and comfortable, but the thing about them is that they never give you anything.  If we lose our concentration slightly, they can come back at you; we showed great resolve and resilience in the game to keep fighting back.”

A couple of flick serves by Chris Adcock caught Choi by surprise and titled the match in their favour at the very end.

“Tactically the flick serve is a big weapon, people don’t use them (often enough). In this hall we know our defence is good and we were able to get the girl to the back and defend on the counter-attack really well. I’ve been working hard on the flick serve,” said Chris Adcock. Chan acknowledged that the new pairing had had the luck of the draw, but their next opponents would be a difficult proposition.

“Today our opponents were not so strong,” Chan said. “We just have to continue to build our combination. It’s a good start for us in Superseries. She (Cheah) was very excited but also nervous. Our next match is against Praveen Jordan and Debby Susanto. We don’t want to think too much. There are no expectations on us, we’ll just try to do our best.”

“In the third game I thought I have to get the extra shuttle, that worked for me,” said Kidambi. “He’s someone who doesn’t attack too much, just keeps the rally going. You have to be more steady than him or you have to crack him. In these conditions it’s hard to go on all-out attack. My training is paying off. I’m really confident about my fitness.” The two Chinese superstars – Lin Dan and Chen Long – also booked a quarter-final clash with wins over Indonesian opponents. Chen looked relaxed in a 21-10 21-13 decimation of Anthony Ginting, while Lin timed his explosive bursts to perfection as he held off a combative Jonatan Christie 21-14 21-19.