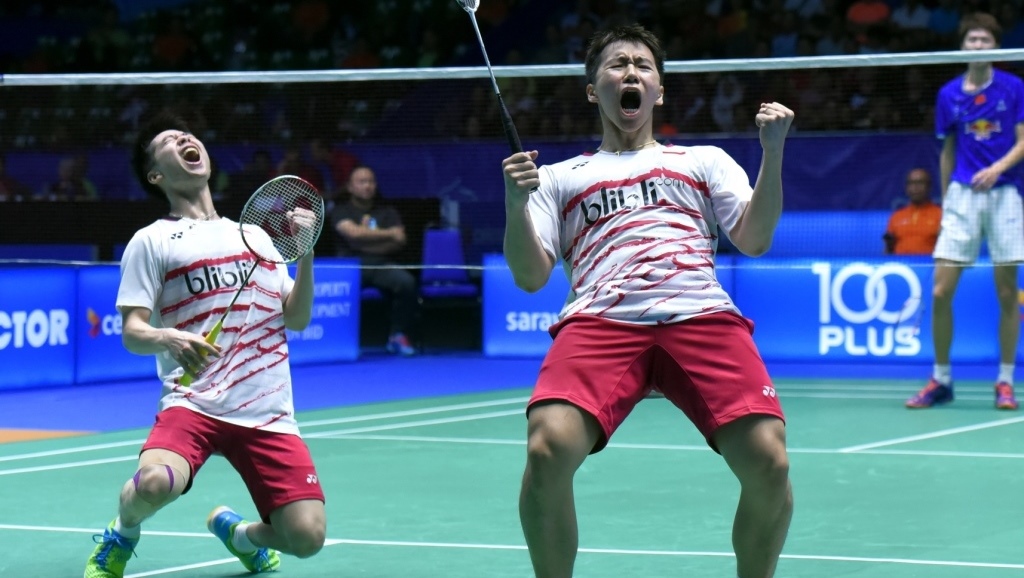 The Gideon-Sukamuljo juggernaut – that has swept aside all comers en route to the first two Men’s Doubles crowns in this year’s MetLife BWF World Superseries – withstood the sternest test from Chinese rivals, Li Junhui and Liu Yuchen at Stadium Perpaduan in Kuching.

Looking far from their speedy and clinical best, the Indonesians clawed their way into a match that they appeared destined to lose and somehow came away victorious, 7-21 21-17 21-17. The winners sank to their knees (featured image) as Li’s return to Sukamuljo’s flick-serve sailed long to secure their passage into the semi-finals. “We feel very lucky, you can’t deny that luck is important. In the second and third games, we played with the same strategy, but we were more prepared to defend their attack,” said Gideon.

His partner noted they were under pressure throughout. Having been blown away in the opening exchanges, the duo rallied from deficits of 14-17 in the second game and 3-9 in the third. Their first lead in the decider came at 17-16 when pint-sized Sukamuljo soared to smash at net.

“We couldn’t find our rhythm in the first game but we never gave up, no matter how far we were behind,” he said of the heated battle.

Tai Tzu Ying – who has ruled Women’s Singles of late – also found herself in a tight spot versus the talented Chen Yufei. The latter shook off the loss of the first game and romped to a 13-4 advantage in the second, only to see the world No.1 reel her in and square the proceedings 20-20. Having nothing to lose, the World Junior champion produced a sizzling smash and then drew another error from Tai to force a decider. Suddenly, there was all to play for and Tai, whose trademark slice drops had deserted her, found some of her show-stopping strokes as she pulled ahead 17-10. Chen was not done though and the young Chinese showed excellent and fearless touches to earn seven straight points and then duelled admirably with Tai before finally falling: 21-17 20-22 24-22.

“I don’t know why I made so many mistakes and lost so many points. I am lucky to get through this match,” conceded the Chinese Taipei player.

In tomorrow’s semi-final, the 22-year-old faces Sung Ji Hyun who breezed past Sun Yu, 21-11 21-15. The steady Korean is hoping she can turn her consistency into tournament victories this season.

“I don’t want winning to be a distraction so I am focusing on performing well in each event and hopefully that will bring success,” she said. Japan’s Olympic champions, Misaki Matsutomo and Ayaka Takahashi, also advanced to the last four the hard way. Coming from a game down, the Women’s Doubles top seeds held their nerves against Huang Dongping/Li Yinhui. There was some measure of payback in the 18-21 21-14 21-17 outcome as the Japanese had suffered a controversial loss to their Chinese rivals last November.

“That was an unusual incident but these things happen. We enjoyed this match and we will try to be more aggressive tomorrow,” said Takahashi. The latter clash with All England winners, Chang Ye Na/Lee So Hee of Korea, for a berth in Sunday’s Women’s Doubles showdown.