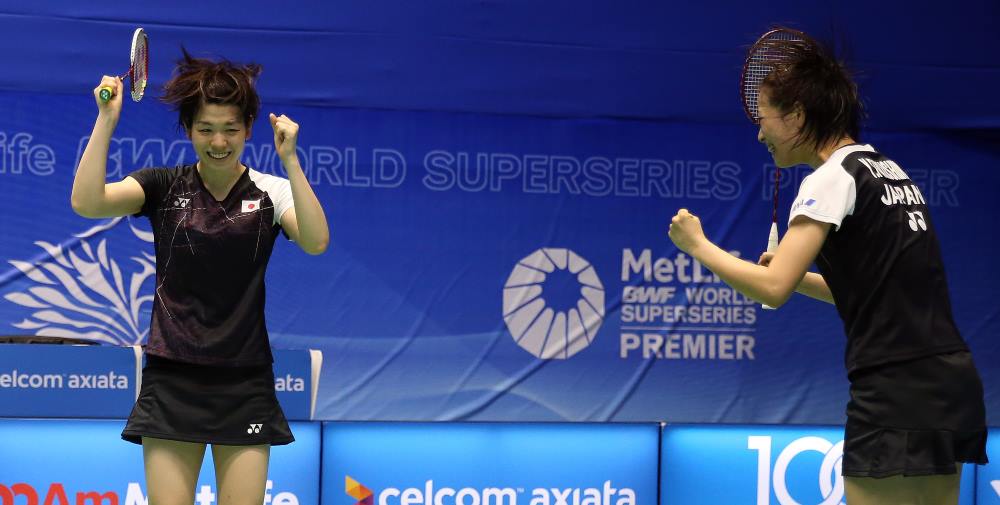 The young Japanese pair will face off against senior compatriots Misaki Matsutomo and Ayaka Takahashi for a place in the Women’s Doubles final.

Fukushima and Hirota (featured image) were rock-steady in countering Chen and Jia’s aggressive game, and the Japanese stayed calm even after the Chinese saved two match points. Chen and Jia had survived a torrid second round against Malaysians Chow Mei Kuan and Lee Meng Yean yesterday, and they raised visions of a similar turnaround in the quarter-final, but Fukushima and Hirota shut the door on them at the third opportunity: 21-18 25-23. Meanwhile, in Men’s Singles, superstars Lee Chong Wei and Lin Dan stayed on track for a title clash. Both veterans made their way past upcoming youngsters – Lee outplayed Korea’s Jeon Hyeok Jin and Lin got the better of Indonesia’s Jonatan Christie.

While it was mostly one-way traffic for Lee (21-11 21-14), Lin had to contend with a combative Christie, who took him to three games.

Unlike in his previous match which he chose to play at a languid pace, it was a different Lin Dan that turned up today. Lin meant business from the first point, exploding off the blocks and seemingly turning the clock back to his prime. It was very much classic Lin Dan – sizzling smashes, diving returns and placements that homed in on the lines.

To his credit, Christie wasn’t overawed and fought on level terms. The Indonesian’s fierce smashes dented Lin’s defence from time to time; his patience and opportunism worked well, but he lost the plot early in the third. As the gap grew wider, the Indonesian’s shoulders slumped; he had thrown his best punches but Lin had come up with something better. The 21-15 14-21 21-9 was a fair indication of how fortunes had swung.

Yamaguchi had beaten Okuhara in their last three meetings – all Superseries quarter-finals.

But today Okuhara was more in control, moving fluidly and returning Yamaguchi’s deep probing shots. Yamaguchi had the lead in both games but left the door ajar and Okuhara forced her way back in.

“It’s good to beat Yamaguchi after three straight losses,” Okuhara said after the 21-18 22-20 victory. “I had a shoulder injury after Rio and that affected my game. Right now it feels fine, but I’m not yet at the level I want to be.” In Mixed Doubles, Indonesia’s Tontowi Ahmad and Liliyana Natsir walked the tightrope before nailing the match winner against Korea’s Choi Solgyu and Chae Yoo Jung. The 82-minute match saw plenty of drama; Choi and Chae saved three match points before the Indonesians could close it out: 16-21 23-21 22-20.

“Our movement is not as fast as it used to be, due to many factors. Younger opponents are faster. But we as senior players do not want to leave the game just like that; we want to keep up our spirit and focus, “said Natsir.